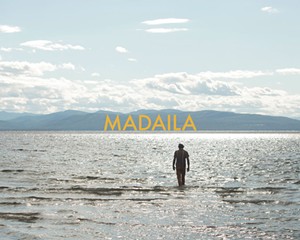 Earlier this year, Mark Daly relaunched his former band, Madaila, essentially as a solo project. Four new EPs were promised to follow, each titled for a cardinal direction said to be inspired by the sounds and feels of the region named. The middling West arrived in May, only weeks before George Floyd was killed by a Minneapolis cop.

The protests that brought awareness to the killings of Floyd, Breonna Taylor and others inspired Daly to abandon the project — South was due next — and move in yet another direction. Specifically, he began writing a concept album about current events and systemic injustice. That album, titled Madaila, was released last week.

South was meant to be "an escape record," Daly wrote in an email. He further explained that it "felt extremely ignorant and insensitive to put out a record that was supposed to be full of escapism and sunny beachy aesthetics." But rather than resolve Daly's internal conflict, Madaila, in some ways, complicates it.

The record isn't a total wash. As always, Daly is a maestro of pop hooks, and his voice is preposterously flexible and soothing. And through his recently built home studio, he improves as a producer with every release. His beats crackle; his synths gleam. He crafts rich, spring-loaded melodies enveloped in finely appointed mixes.

The rhythmic, syncopated "Can't Find You" is one of his most interesting songs to date, in terms of production and songcraft. But, in a catch-22, the EP and the aggressive promotion surrounding it tacitly aggrandize Daly rather than the causes he aims to support.

His suggestion that releasing an escape record "felt extremely ignorant and insensitive" might reflect Daly's anxiety about being publicly shamed on social media should South have pulled focus from the racial justice movement. That's an unfortunate but understandable concern. Daly is hardly the only white artist, local or otherwise, who chose to shelve a release during the tumult that erupted in late May and early June.

On social media, those decisions drew widespread backlash, primarily from other white people, including from those admonishing white artists for diverting attention by posting about anything other than the movement.

Rather than a champion of the cause, Daly emerges as a kind of indie-pop pied piper, beckoning like-minded listeners to follow him. By releasing Madaila, he's effectively done the thing he seemed most afraid to do: center himself, a white person, instead of racial justice.

Daly's unambiguous support of women and people of color comes off as condescending. On opener "Best Thing," he sings, "I wish that women ruled the world." That's a nice thought, but it lacks the complexity and critical thinking necessary for untangling the patriarchy. On "Heavy," Daly sings, "There has got to be a way that we can fix / This oppression and injustice that exists / Within our Black and brown communities." It reminds me of Aldous Snow singing, "We've got to do something!" Daly's new work is just as effectual.