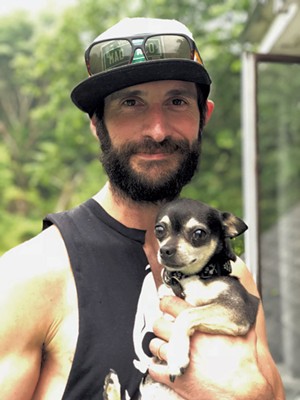 In a small cooking community, what goes around comes around. This Thursday, July 5, chef Colby Miller is returning to Hostel Tevere in Warren, where he ran the kitchen until the in-house restaurant closed four years ago. Hostel owners Sarah Wright and Giles Smith continue to run the lodging's bar.

Miller has worked for the Mad Taco since 2014. The restaurant he's helming at his former workplace, dubbed Mad Burger at the Hostel, is the second new enterprise in less than 30 days from Mad Taco co-owners Joey Nagy and Wes Hamilton, who debuted a Mad Taco location in Essex on June 1.

The small set menu leaves room for the kitchen to play around with ever-changing specials, Miller said. This week, those specials will include a panzanella salad with pickled summer veggies, Green Rabbit Bakery bread and anchovy; and a muffaletta baguette sandwich layering salami and capicola with olive tapenade, roasted red peppers, cheddar andaioli.

"We have a pretty vast culinary experience at the [Mad] Taco right now," Miller said. One reason the owners decided to launch yet another restaurant, he added, was to give their many talented workers a break from slinging tacos.

"This is a chance for our staff to go out and be creative," Nagy said on Monday. "[At the Hostel, they can] go and play with the food and get a little change-up."

And, in typical Mad Taco style, most of the ingredients will hail from the Mad River Valley, including beef and pork from Kenyon's Farm and poultry and produce from Fayston's Marble Hill Farm, where Nagy is also a co-owner.

Mad Burger at the Hostel will be open Thursdays and Fridays for dinner and on weekends for lunch and dinner, starting July 5.

The original print version of this article was headlined "Burger Madness"