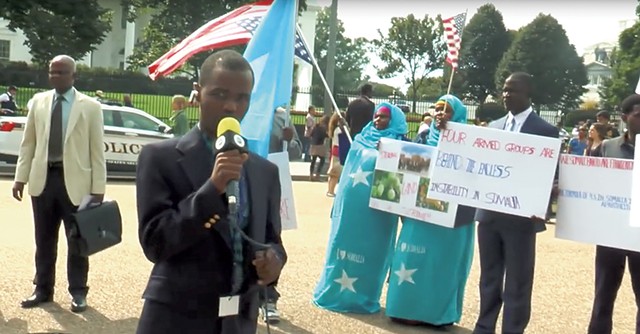 On a Saturday morning in early December, Mohamed Muktar scribbled furiously on his legal pad, oblivious to the flurry of activity in the studio of Vermont Community Access Media (VCAM) in Burlington. Filming for Muktar's weekly news program, "Somali Bantu TV," was about to start, and he was finalizing the list of issues he'd be presenting. Occasionally, Muktar did a microphone test and shifted his chair toward the cameras, as instructed by his cohost, Muktar Ali.

Muktar and Ali started "Somali Bantu TV" in late 2013; their show — usually an hour long — runs on Burlington's community-access Channel 15 four times a week and is posted on YouTube. The show is a rarity — in the U.S and worldwide — because it's delivered in Maay Maay, a language mainly spoken by the Bantu people, a persecuted minority in Somalia.

The first time Muktar, 27, saw himself on television, he felt "very proud." These days, Muktar and Ali have reason to be even prouder. Last month, they were awarded the top prize at the Alliance for Community Media — Northeast Region's 17th annual video festival in the nonprofessional issues and political process category (PDF).

When a civil war broke out in Somalia in 1991, the Bantus bore the brunt of the violence and fled to refugee camps in Kenya. Vermont received its first Bantu families in 2003. Today, about 1,500 Bantu individuals live in the state, according to the Somali Bantu Community Association of Vermont.

The ACM-NE award helps establish Muktar and Ali as public faces of that community — and raises their profile outside it. "Last time, we were thinking it's only for our community. But now, we noticed that even other communities are noticing what we are doing," said Muktar, who works as a multilingual liaison for the Burlington School District during the day and a cleaner at the University of Vermont Medical Center at night.

Though the ACM-NE received no other entries in the category, the lack of competition doesn't diminish the work of "Somali Bantu TV," said Camille Bartlett of Peabody Access Telecommunications, who coordinated the festival. Indeed, the open field demonstrates the team's dedication. "It is a time-consuming effort to produce any kind of programming, more so if you are doing it on the side," she explained in an email. Last year the nonprofessional category only had three entries, reflecting the inherent difficulty of producing such a program, she pointed out. By contrast, the professional side of the category had 18 entries.

Muktar came to the U.S. in 2005, Ali in 2004. They met in 2009, two years after the latter's move to Vermont. Before the two men created their TV show, they and their friends wrote, performed and shot comedy skits based on their experience as refugees in Kenya, which they posted on the internet. In one such skit, Ali plays the role of an interpreter for Kenyan police officers who use force to extract a confession from a Bantu suspect.

Between 2009 and 2015, the pair also made four feature films — including one in the horror genre — and distributed them through their own production company, Banllywood Entertainment. They said making films was cathartic. "When we shoot a movie about a challenge or experience, we feel like, Now the story or challenge is not inside my heart or my brain," explained Muktar.

Of the pair, Ali, 30, who also works at the UVM Medical Center, has a bigger passion for filmmaking. He's an avid fan of Bollywood films and counts Shah Rukh Khan as one of his favorite actors. A self-taught producer and video editor, he's made a Bollywood-themed music video that's available on VCAM's website.

One of the challenges Ali said he faces is hiring actresses. Bantu families discourage their daughters from acting because they fear it would ruin their marriage prospects, the father of two said. "Or [they worry] she's going to be a player," added Muktar. Thus far, Ali has managed to cast four women in his films — though some are his relatives, he admitted, and none lives in Vermont.

After dabbling in acting and filmmaking for four years, Muktar and Ali decided to create a news show. "Our goal is to make our people understand what's going on around the world. This is the only news [program] that speaks their language. Most of them are not educated. They don't read the newspapers," explained Muktar.

For news junkie Muktar, this was a dream come true. While he participated willingly in skits and films as a supporting cast member, he said his real passion lies in broadcasting. "I want to be the first guy to start Maay Maay media," he said.

Back at the VCAM studio, Muktar and Ali conferred one last time before they started filming. Their set design is simple: a small, round table and two deep-red cushioned chairs.

Muktar clipped a microphone on his brown leather jacket and, a couple of seconds later, Ali signaled the start of the show by staring straight into the middle camera and saying, "Assalamualaykum," the Arabic greeting often used by Muslims. While one presented the news, the other listened intently or jotted notes. The transitions between the two hosts were seamless, no doubt from practice. Throughout the filming, their colleague, Muhidin Abdi, manned the control room in silence.

Somali politics and the situation in Kenyan refugee camps feature prominently on "Somali Bantu TV." Both Muktar and Ali see it as their duty to educate the younger generation about their history. "They have no idea. Most of their parents are not giving them the information," Muktar lamented.

The pair receives news videos and audio clips from volunteer correspondents based in Somalia and refugee camps in Kenya, and Ali edits them into the program. It usually takes him an hour to edit an episode, he said. Bantu communities across the U.S. also send news tips to the team — which sometimes reports live, as well. In October, Muktar went to Washington, D.C., to cover a protest rally against the treatment of the Bantu people by the Somali government.

For now, the program appears without English subtitles, which Muktar and Ali said they lack the resources to provide. While acknowledging the potential of subtitling to reach a larger viewership, they stressed that the program's main target audience is Bantu people.

Muktar and Ali aren't the only Vermonters who see the value of starting their own community media outlet, but they're certainly the most active, said Bill Simmon, director of media services at VCAM. "We were thrilled to support their efforts. I don't know of any group from anywhere who has both a news arm and an entertainment arm," he added. "That's definitely unique to them as far as Channel 15 is concerned."

In fact, Simmon wishes "there were more non-English content on the channel" and encourages non-English speakers in Burlington to "come in and use our facilities."

Before filming, a VCAM employee typically helps Ali set up the microphones and lighting. But Simmon observed that Muktar and Ali "like to get to a place where they don't really need the staff to help them at all."

Self-sufficiency is just the beginning of the duo's aspirations. Down the road, they said, they would like to make a film about the Bantu people in Africa, as well as to open their own studio in Kenya.

Muktar reckoned they would need about $20,000 to start their own facility in Nairobi, where they could film interviews with newsmakers in Africa such as politicians, actors and actresses, thus improving their coverage as an international media presence. Such a facility would also create jobs for producers, editors and reporters in Kenya who speak Maay Maay and Af-Maxaa, the official language of Somalia, Muktar pointed out. To make that vision of a cross-continental Maay Maay media company a reality, he said, he'll need to "work hard" by applying for grants and fundraising in several states.

Though Muktar has no plans to leave the U.S. and head that team in Nairobi, he dreams of presenting the news full time. "That's my goal, my hope," he said.

The original print version of this article was headlined "Making News"