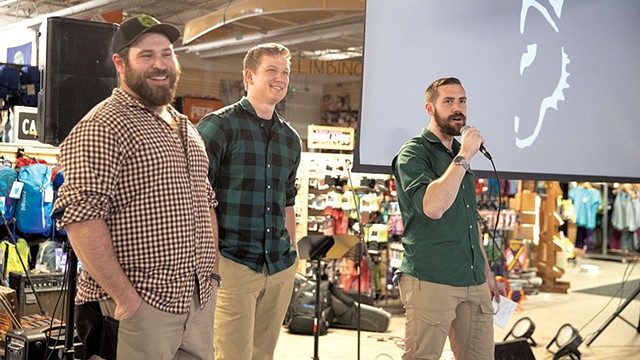 The product launch party for Lykos Designs, a new Shelburne-based menswear brand, was no fashion industry gala. The event, held in early May at Outdoor Gear Exchange in Burlington, didn't feature metrosexual runway models with steely stares and $1,000 haircuts. Modeling Lykos' cargo pants was Matt Looft, who helped the company's founders design them. His were grass-stained from months of product testing on his family farm in Charlotte.

As local bluegrass band the Tenderbellies played and a bartender poured pints of Zero Gravity beer, guests examined samples of Lykos' products. These included beige cargo pants with black, nylon-reinforced knees, heels and seat; and green technical shirts with reinforced shoulders for carrying a pack, as well as zippered sleeve pockets big enough to hold a folded USGS topographic map. Free for the taking were chunks of resin-soaked fatwood, a handy wilderness tool for starting fires.

"Welcome to the official launch of the Lykos brand!" announced company cofounder Trevor Marcy to a crowd of about 50 people. What followed was a short promotional video featuring Marcy in the backcountry — building a fire, forging a river, hiking in a thunderstorm — all while sporting a Tymber Top technical shirt and technical trousers, or the Dyre Pant, the latter of which is Lykos' flagship product.

Branding a line of menswear with the aesthetic of the rugged American outdoorsman might seem cliché, except that these designers are cut from a different cloth than most. Marcy is a former Navy sailor and U.S. Army Special Forces combat medic; he left the military in 2014 to pursue a civilian career in emergency medicine.

Cofounder Zach Johnson is a former Green Beret engineer and demolitions expert. Looft, their third partner, is a former wilderness instructor at the National Outdoor Leadership School in Lander, Wyo. He spent 16 years working in outdoor retail before becoming an emergency room charge nurse at the University of Vermont Medical Center.

What motivated two special-forces veterans and an ER nurse to start their own line of men's clothing as a side project? Necessity.

"My entire life, I'd had pants that were either too short for me or too big for me," explained Johnson, who's six foot five and now works as a corporate headhunter in Washington, D.C. "Even when I was deployed in the Sahara desert, I was wearing shorts" cut from Army-issued fatigues.

Johnson's garment woes weren't unique. It was almost comical, he recalled, seeing his fellow Green Berets, guys six foot two and taller, lining up to check a building for enemy combatants. "It looked like they were all wearing capris, because their pants went halfway up their calves," he said.

Indeed, one lesson that Marcy took from his six years in the service was how not to design clothing.

"The military has some good concepts [for its uniforms] but shitty executions," he said. "That you can make something to be worn every day is a great idea, but made out of thin fabric? Not a good choice."

Actually, the whole notion of Lykos Designs began as a lark. In August 2017, shortly after Johnson's honorable discharge, he visited Marcy at his cabin in the Northeast Kingdom. Over beers one night, they started talking about what the ideal outdoor clothing would look like. The next day, Marcy drew up some sketches.

He was no neophyte to tailoring. At 20, Marcy became fascinated with the idea of self-sufficiency, which included knowing how to make his own clothing. He spent the next eight years teaching himself to sew and tailor.

"The first shirt I ever made was a complete disaster," recalled Marcy, now 29. "I put the arms on backwards and the collar upside down. It was a horror show."

Still, he kept at it. In his down time, Marcy studied an old German method of tailoring called the Rundschau System for cutting, then bought a pattern book that high-end tailors still use today.

"It used to be the case that if a man bought a suit, it was expected to last him for the rest of his life," he explained. To that end, tailors would sew inlays of extra fabric into the suit, allowing it to be altered as the wearer aged, stooped in posture, and gained or lost weight.

"That idea, for me, was really inspirational," added Marcy, who's since incorporated the concept into Lykos' products. "It got me away from viewing clothing as this disposable commodity and started me thinking about it as another tool that you could have for the rest of your life."

After leaving the military in 2014, Marcy enrolled at UVM to complete his bachelor's degree in psychology. He graduates this month and will take his MCATs this summer, with plans to attend medical school in 2019.

During his time at UVM, Marcy met Martin Thaler, professor and resident costume designer in the Department of Theatre. For an independent study project, Marcy designed and made a custom-fitted suit jacket from scratch.

"That was the first time I said to myself, Maybe I can do this," he said.

After last summer's productive conversation with Johnson, Marcy had dinner with Looft, whom he'd befriended while they worked together in the UVM Medical Center's emergency department. Marcy shared their ideas about the clothing, and Looft, a self-described gear head who gives his dimensions as "six-two and eighth of a ton," offered his own suggestions. From there, Marcy immediately got to work making patterns.

Then, with help from Johnson's father-in-law, who owns a clothing factory in the Dominican Republic, the Lykos team had its first prototypes in hand. The clothes went from initial concept to fall-delivery preorders in eight months.

"What started as a joke," Johnson said, "isn't a joke anymore."

The name Lykos, from the Greek word for wolf, was chosen to reflect both the company's marketing slogan and its founders' credo: "Find your inner wolf."

"If we're in a city or urban environment," Marcy explained, "we're only comfortable there for a very short amount of time, and then we feel this pull to get outside. We call that our inner wolf."

The goal of the Lykos team sounds as hard-core as their backgrounds: to market menswear that's durable, multifunctional and hand-tailored to each customer's measurements, yet affordable.

"Other people do this, but they charge $600 for a complete, customized pair of outdoor pants that'll survive a large variety of environments," Johnson explained. "There's no need for that. We make clothes for ourselves that we want to sell to other people. That's what this is all about."

The Dyre Pant technical trousers, which start at $80, encapsulate the philosophy of clothing as wilderness tool. The cargo pockets are designed to transfer their contents' weight backward and off the thighs for more comfortable walking. They include an internal cellphone pouch and nylon reinforcements to minimize wear from carrying a knife clip or other tools.

As Marcy explained to the launch-party attendees, most men's clothes are designed for someone standing perfectly straight, not for a body in motion. He incorporated shaped pant legs and an articulated seat. Why? "Because your ass bends," he said.

Another structural deficiency with many men's pants: stress points at the crotch — what Marcy called "the dreaded four-way seam of failure." His solution was a gusseted, or diamond-shaped, crotch, which offers greater freedom of movement while minimizing the likelihood of seam failures.

Lykos also sells an interesting accessory inspired by the founders' military careers: the Tagelmagh ($20), a 40-by-40-inch piece of linen/cotton fabric with multiple uses, including sling, scarf or tote. The name, Marcy explained, is a contraction of shemagh (aka keffiyeh), the checkered scarf worn by "serious operators" in the military, and tagelmust, the headscarf worn by Bedouins in sub-Saharan Africa.

"They dye it with indigo," Marcy said of the latter scarf, "and we dyed it the same color, to honor that [tradition]."

Lykos products won't be sold in stores but are tailored for each order. Accordingly, company creators take a unique approach to building community: Each week they release podcasts, posted on iTunes and lykosdesigns.com, derived from conversations Marcy and Looft have while hiking with their dogs.

The podcasts aren't infomercials. As Looft put it, they're "a place to start a conversation" about how one moves deftly through the outdoors with the right tools, skills and mind-set.

For example, the episode "To Build a Fire" is based on the Jack London short story of the same name and covers fire-building techniques and backcountry anecdotes. A forthcoming episode features an interview with Mike Lauria, a former Air Force pararescueman who's now a flight paramedic with the Dartmouth-Hitchcock Advanced Response Team in Lebanon, N.H. Lauria spoke to Looft and Marcy for nearly an hour about how to perform well in acutely stressful situations.

As the Lykos launch party wound down, several guests expressed interest in placing orders. Among them was Tyler Stinson, an emergency medical technician in Burlington. Standing six foot eight, with a 38-inch waist and 38-inch inseam, he exemplified the anecdote Johnson told earlier: Stinson was wearing his own military pants cut off at the knees. Why was he interested in Lykos' clothing?

"Look at me," he said. "I have to custom order everything online."

But it wasn't just big and tall men lining up to place orders. Bryan Willette, a smaller, leaner man clad in a Green Mountain Rock Climbing Club jacket, said he was "definitely getting something." Willette noted that he'd seen Marcy wearing his technical pants around OGE and had assumed they were a Fjällräven product.

Some female attendees expressed disappointment that Lykos doesn't plan to sell women's garments, at least for now. But, as Marcy explained, he lacks that expertise. And, like a true special-forces operator, his attitude is: Do it right or not at all.

The original print version of this article was headlined "Wear Wolves"