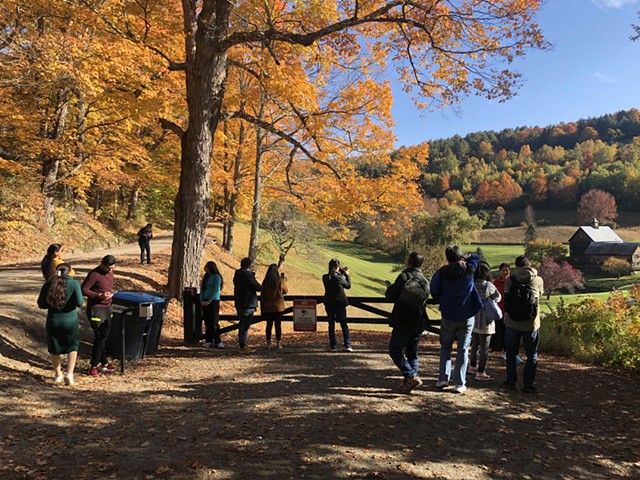 “I’m literally going to Vermont because of a picture i [sic] saw on social media!”
So said “lissette” in a 2019 comment on a Yankee magazine story about Pomfret’s Sleepy Hollow Farm, one of the most photographed places in the state.

Judging by the dozens of people who were streaming up Cloudland Road at 9 a.m. on a recent Wednesday to see Sleepy Hollow for themselves, lissette’s path to this wrinkle in the hills north of Woodstock has become well worn. Instagram has more than 4,000 posts tagged #sleepyhollowfarm, and TikTok is awash in videos by influencers strutting and posing in front of the painfully quaint homestead, typically presented with a soundtrack of warm, acoustic café rock.

When I visited, cars with license plates from near and far lined the road. People were using smartphones and expensive-looking cameras to shoot the scene: a long, curvaceous driveway leading down to a pond, a Cape-style house and two barns, all situated among green pastures beneath a ridge on which hardwoods glowed orange and red.

A couple from Miami were snapping pictures. They said they came because they found Sleepy Hollow while researching things to see in Vermont.

An older man from New Jersey was there with his wife for the second time. “If you came at seven this morning, you would have seen a lot more people, and it would have been hard to find a place to park,” he said.

A family of five, including three young children, had come from Delaware. The father is a pilot with Southwest Airlines, and they’d gotten a free flight to Albany and driven the rest of the way. They learned about Sleepy Hollow on Pinterest.

“We’re going to do some maple stuff later,” the pilot said enthusiastically.
Texans, Californians, Pennsylvanians, New Yorkers — they’d all convened to grab a bucket-list shot of a property so famous it has become almost a cliché of Vermontyness. 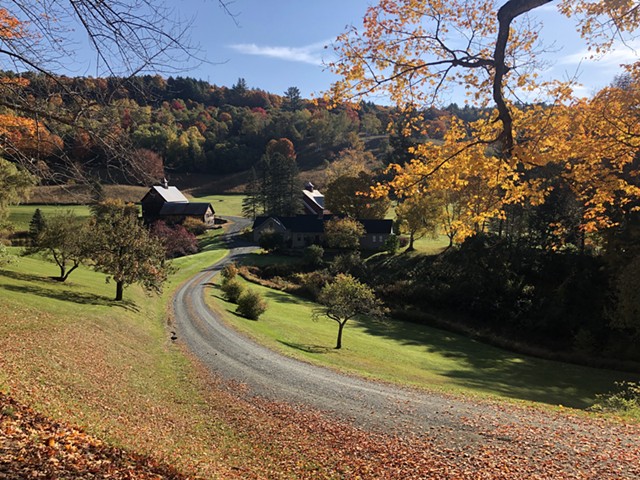 Two middle-aged women from Plympton, Mass., voiced reservations about joining the scrum of shutterbugs pointing their cameras right at a private home. But they snapped their shots anyway. “I just think you gotta do it with respect,” one said.

Not everyone was following that dictum. As I watched, a man from Connecticut flew a drone over the property and lost control of it. The drone landed on the other side of the road, where he retrieved it after climbing over a stone wall and a fence.

A woman walked around the gate at the top of the driveway and smiled for a shot with the property behind her. The “Private Property, Keep Out” signs along the edge of the road appeared to be just suggestions to her.

Mike Doten grew up as Sleepy Hollow’s neighbor and now lives across the street at Elm Grove Farm. He said he’s collected two bags of trash along the road in the past two weeks.

“It’s a little disappointing,” he said. “They’re out in a beautiful spot because it’s beautiful, and then they throw trash. I don’t get it.”

Still, Doten didn’t seem too bothered by the crowds, which he said show up only during the few weeks before and after Indigenous Peoples’ Day — peak foliage season. “Most people are considerate,” he said.

Doten isn’t certain how Sleepy Hollow Farm became such an icon of Vermont, but he knows it’s not a new development. He remembers visiting EPCOT at Walt Disney World Resort more than 30 years ago and seeing a picture of the property at one of the exhibits.

For a long time, Doten said, Sleepy Hollow was famous only among hard-core photographers, who would show up before dawn to set up tripods and wait for the sun to rise over the hill behind the house. With the advent of digital photography and social media, however, the property’s popularity has grown.
And “in the last four to five years, it’s mushroomed,” Doten said.

This year, the Pomfret Selectboard decided to manage the crowds a little more proactively than in the past. The town’s highway department put up signs along the road indicating that traffic could only travel one way (uphill) and routing people down another road to get back to Woodstock. On recent weekends, the town paid the Windsor County Sheriff’s Department to enforce the rule, according to selectboard vice-chair John Peters Jr.

“We toyed with the idea of closing the road except for local traffic,” Peters said, “but we figured it would exacerbate the problem and cause people to park at either end and try to walk in.”

One-way traffic at the height of foliage season helped alleviate congestion and make Cloudland Road more accessible to emergency vehicles, Peters said. The road has since returned to its normal two-way flow.

For about 15 years, the visual allure of Sleepy Hollow Farm was enhanced by the public knowledge that it had a celebrity owner: Joe Perry of Aerosmith.

Perry sold Sleepy Hollow in 2020 for $2.2 million, and the 115-acre property changed hands again in August, at a selling price of $4.25 million. The current owner is listed in the Pomfret land records as LaChopera, LLC, a corporation registered in Vermont.

What’s it like to own a piece of property identified as a tourist destination on Google Maps? I put that question to the owner’s attorney, Brooke Hague Trottier of Norwich, who responded that her clients “are very private folks and have declined” to be interviewed.

Perhaps the throngs of visitors during foliage season are a mere temporary inconvenience that comes with the privilege of possessing such a picture-perfect estate. Plenty of people might take that deal if they could.

A young woman walking with her dad on Cloudland Road put it another way: “I’d be OK if you bought that property,” she said. “I think Mom would be, too.”