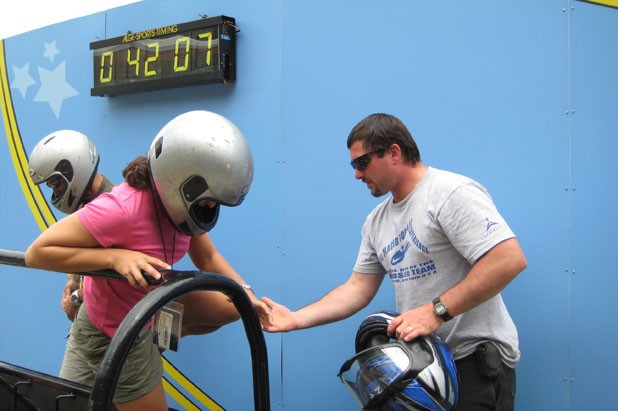 Joe Allen drives a bobsled. For a living. All year long. Allen, of Clintonville, N.Y., knows he has an unconventional job. Five days a week in the summer, the 29-year-old takes tourists and thrill seekers on bobsled rides down Lake Placid’s 1980 Olympic track at Mt. Van Hoevenberg. In the winter, Allen pilots the sled down the new World Cup track, built in 1999. While that may sound exciting, after years driving bobsleds full of screaming passengers down the mountain dozens of times a day, Allen says to him it’s just a job.

Shortly after the 1980 Winter Games ended, the Olympic Regional Development Authority was formed to make use of all the venues that had been purpose-built for the event. The bobsled run got a new lease on life when ORDA began offering rides to the general public. At first, the rides followed the bottom half of the original concrete track, which was also used for the 1932 Winter Olympics. When a new track was built 10 years ago, the winter rides were moved there to give passengers a better sense of what bobsledding is all about.

Allen is one of three professional drivers who guide these 2000-pound sleds down the track. Five brakemen get the sled going at the top of the half-mile run and stop it after it crosses the finish line.

A ride on the summer track costs $65 and starts off gently enough with an easy dog-leg turn. Then the sled picks up speed and flies into the first of three monster corners that may make passengers feel like they’re about to become airborne. In less than a minute, it’s finished.

Seven Days caught up with Allen between runs to ask him about his life on the skids.

Seven Days: How did you get into driving the bobsled at Lake Placid?

Joe Allen: I worked at Whiteface for six years, and you got laid off twice a year over there ... One of my friends at the time worked over here and told me about the brakeman’s position. I didn’t even know what it consisted of. I came out and applied, took a ride in the bobsled, and that’s how it started. I was a brakeman for a couple of years, and then I started training to drive.

SD: When you started as a brakeman, what was the training process like?

JA: What it is, is you take a ride in the bobsled and you get the feel of that. Then they let you sit in the sled and kind of go through the motions of what you’re going to be doing when you’re braking ... Somebody sits in front of you who’s already a brakeman, and they tell you with hand signals when to brake and when to let go ... After a few times of that, you’re on your own. After 25 trips of doing it correctly, you’re licensed.

SD: What is the brakeman’s role in the sled, besides making sure it doesn’t crash?

JA: He has to help instruct the people, get them buckled in, get the pads ready ... Then from there he has to push the sled off and hop in. If we have kids who are bobbling around in front of him, he has to steady them so they don’t get hurt on the ride ... If someone’s trying to snap a picture, you have to make them put their hands down.

SD: Wait, so people actually try to take pictures when they’re in the bobsled?

SD: Is it hard to stop the sled?

JA: Yeah, very. You have to stop a 2000-pound sled going almost 60 miles per hour with your hands.

SD: So you can’t have a weakling in the back there.

JA: No, usually people who are real weak don’t end up making it.

SD: How did you transition to being a driver?

JA: A couple of drivers were getting out and they were looking for new drivers, and I was next on the list.

SD: What does the training for the driver position entail?

JA: I started in the winter, so it’s different. There are no training ropes like there are in the summer. Basically, they just push you off and say good luck. After you’ve been a brakeman for a while, you know where you’re supposed to be and where you’re not.

SD: Was it nerve-wracking to drive that first time?

JA: Yes, very. I almost threw up, actually. I was pretty nervous.

SD: Obviously, you had ridden this track hundreds of times, so you knew the course.

JA: It’s not about knowing the course. This is a whole different thing. The responsibility is totally on you. If I put the sled over, I’ve still got my friends and crew in there, and I don’t want to hurt them.

SD: What’s more challenging, driving the bobsled in the summer or the winter?

JA: As a driver, the winter, just because you’re on ice. In the summertime I have total control. I can put the sled anywhere any time I want it to be there. It’s rubber wheels on concrete.

SD: What are some of the crazier experiences you’ve had as a bobsled driver?

JA: I’ve had people cover my face; I’ve had people grab my arms. Sometimes I’ve had rides where the G-forces suck people down into the sled and they head-butt my spine. I’ve had all kinds of experiences, some probably not fit to talk about.

SD: What, like people throwing up in the sled?

SD: What are the top speeds of the bobsleds you drive?

SD: Have you ever crashed the bobsled?

JA: Not with the public in. I did crash once when I was learning how to drive. I took, like, 35 trips, and the very next trip I went too low and went up on the outlet and flipped it. None of us got hurt, but it was pretty wild.