Lucid, Home Is Where We Wanna Grow 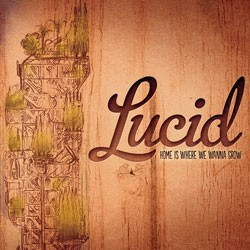 Given that the musical character of the North Country is inextricably linked to the jam band, Plattsburgh’s Lucid are traditionalists with their feet firmly planted in the garden the Grateful Dead planted and Phish cultivated. Outside the Lake Champlain region, the idea that a “traditional” sound could include all sounds — or at least so many genres that it feels like the musicians are working out of a catalog — seems ludicrous. Not so for the boys in Lucid: James Armstrong on sax and vocals, Andrew Deller on keyboards and vocals, Kevin Sabourin on guitar and vocals, Chris Shacklett on bass and vocals, Kyle Murray on drums and vocals, and Lowell Wurster on percussion, harp and vocals. The band’s latest record, Home Is Where We Wanna Grow, is a musical hodgepodge, presenting everything from a French-inflected ballad (“Parisian Melancholy”) to a pseudo-1950s pop song (“Highest Vibration”).

Lucid’s sampling of sounds is technically difficult and might seem daunting to lesser bands. Luckily for the kids from the Lake City, they’ve got the chops to make Home Is Where We Wanna Grow a listenable smorgasbord rather than a tasteless garbage plate. Further examples of Lucid’s diverse approach are “Green Money,” a soft-rock track that includes a little R&B “Boats,” which recalls Paul Simon’s Graceland; and “Despots,” which tackles its tough subject matter with breezy, bossa nova-influenced tropical pop.

Still, the best tracks on Home Is Where We Wanna Grow are those with a more recognizable formula. This is why the white-boy ska of “Whiskey Dreams” is so infectious. It’s also why “Highest Vibration” shines as the album’s brightest light.

At times, Lucid are guilty of showing off. And when it comes to lyrics, the band could step back from its overused “green and sustainable” platform. Still, the album is well produced and precisely executed. There’s no doubt Lucid are at home on Home Is Where We Wanna Grow, and their third studio release is as North Country as lake monsters, the Allen family and French Canadian tourists.

Home Is Where We Wanna Grow is currently available on Amazon, iTunes and Spotify. Catch Lucid live at Nectar’s on Wednesday, July 24, and Wednesday, July 31. For more info, visit rulucid.com.