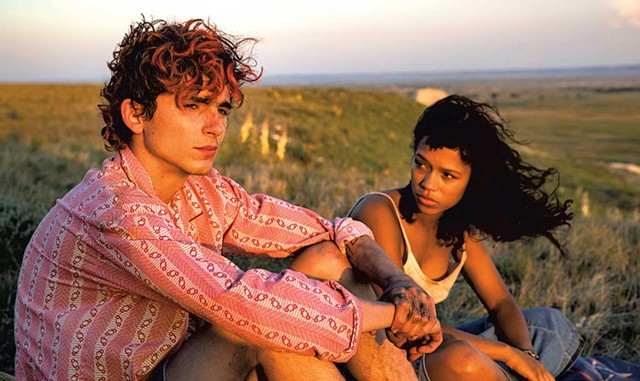 Just in time for Thanksgiving, acclaimed director Luca Guadagnino (Call Me by Your Name, I Am Love) has brought us a touching story about another kind of gluttony. Based on a 2015 young adult novel by avowed vegan Camille DeAngelis, Bones and All premiered at the Venice International Film Festival, where it won multiple awards and reportedly received an eight-and-a-half-minute standing ovation.

In the 1980s, quiet high schooler Maren (Taylor Russell) lives alone with her dad (André Holland), who forbids her to socialize with her peers. We learn why when Maren sneaks out to a sleepover, where she puts a friend's finger in her mouth and chomps down.

Maren is a cannibal, born with a hunger for human flesh. She doesn't remember eating her babysitter when she was 3, or that kid at summer camp. But her father hasn't forgotten, and he puts his daughter's whole sad history on a cassette tape for her before taking off and leaving her to fend for herself.

Maren hits the road in search of the mother she never knew, from whom she suspects she inherited her proclivities. Along the way, she meets creepy Sully (Mark Rylance), a fellow "eater" who educates her about their kind, and dreamy drifter Lee (Timothée Chalamet), who's also one of them. But how close can a girl get to anyone when she harbors an insatiable hunger?

My description might make Bones and All sound like a horror comedy, but it's actually a stranger mashup than that: an earnest indie drama spattered with blood. The screenplay, by David Kajganich, offers no witty banter; don't expect to be reminded of "Buffy the Vampire Slayer" or Zombieland. Guadagnino's teen lovers are more prone to solemn exchanges like this one: "You don't think I'm a bad person?" "All I think is that I love you."

The movie offers minimal plot and dialogue and maximal vibes. As Maren and Lee travel across the Midwest, Guadagnino lingers on vintage roadside color — diners, markets, a carnival, humble dwellings full of immaculately chosen ephemera. Bones and All reminds us how rarely and selectively American directors depict poverty in the heartland, whereas European filmmakers, such as Guadagnino and Andrea Arnold in American Honey, practically revel in it.

Like its production design, the film's casting is a tour de force; even the walk-on characters look like they stepped straight out of their place and era. Arseni Khachaturan's cinematography gives everything a subtly gauzy, dreamlike quality, especially when Maren and Lee reach the wide open spaces of the Great Plains.

Even when the film gets gory — and it does! — the blood splashed across the gorgeous sets has a pictorial quality. We seldom feel genuine horror, except in a few scenes that showcase grotesque supporting characters. (Rylance, Chloë Sevigny, Michael Stuhlbarg and David Gordon Green do superlative work in these roles.) When it focuses on its young protagonists, by contrast, Bones and All rides on a mournful sense of innocence lost.

For many viewers, that moodiness may be enough to make the film a cult classic in the vein of Kathryn Bigelow's 1987 vampire film Near Dark. Other viewers, however, may be frustrated by the broad strokes with which the main characters are drawn.

Russell suffuses Maren with such believable adolescent fear and ambivalence that the fine-tuned performance almost makes up for her underwritten character. In the source novel, Maren is especially compelled to eat people for whom she feels affection, but that intriguing paradox didn't make it into the screenplay. Here, while she expresses frequent remorse and empathy for her potential victims, we never really see her grow. We're told that she simply forgot about her childhood cannibal episodes, which seems like a convenient way to dodge thorny questions about her degree of guilt and capacity for change.

The way Guadagnino portrays the cannibal urge, it could be a metaphor for all sorts of real alienating conditions — and none of them. Ultimately, it feels less like a meaningful motif than a pretext to inflict angst on the central couple. A core tension is never resolved: Lee and Maren are so sweet and winsome that we don't want to judge them for eating people, yet how can we not judge them? All such questions end up subsumed by the swoony atmosphere of doom.

Like Call Me by Your Name, Bones and All stands or falls on its romanticism — on the web of sumptuous visuals, pulsing new-wave songs and attractive stars that Guadagnino spins to enchant us. It's an alluring spread indeed, but I can't help feeling like he never gets to the meat of the matter.

Suspiria (2018; Amazon Prime Video, rentable): Guadagnino first ventured into the horror realm with this reimagining of Dario Argento's 1977 classic about a spooky ballet school. Jessica Harper, star of the original film, appears both in the remake and in Bones and All.

Only Lovers Left Alive (2013; HBO Max, Kanopy, rentable): Only Jim Jarmusch could make a vampire movie as jaded and moody as this one, in which Tilda Swinton and Tom Hiddleston play monsters in love.

Ginger Snaps (2000; AMC+, Crackle, fubo, Peacock, the Roku Channel, Pluto TV, Redbox, Shudder, tubi, Vudu, rentable): For a film that fully leans into the metaphor of a teen coming of age by eating people, you can't do better than this Canadian cult movie about two sisters, one of whom becomes a werewolf.