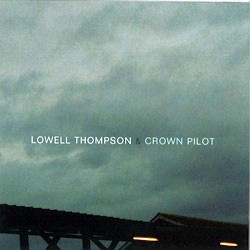 Where we last left off (OK, where I last left off, more than two years ago), Lowell Thompson was a budding country-rocker — the workingman’s answer to Whiskeytown-era Ryan Adams, a young journeyman with a Heart of Gold and paint-spackled pants (Thompson’s pre-musical trade was as a housepainter). Back then, our troubadour was among those lucky performers seemingly destined for fame beyond Burlington’s drinking holes. But we all know how that story goes…

Lowell Thompson & Crown Pilot should be the record that breaks him nationally, but do bands even “break nationally” anymore? Noted alt-country rag No Depression is no more, and radio is a centralized jukebox of Disney pop and manufactured buttrock. Where does an earnest, twang-caked gem like Thompson’s latest fit in? It fits in your iPod, or CD player (if you still have one), that’s where.

To be honest, Lowell and his band — which includes drummer Steve Hadeka, bassist Kirk Flanagan and Vermont axe legend Bill Mullins — aren’t as sloppy and/or stoned as vintage Parsons or Peckinpah, and that has its positives and negatives. Yet they’re certainly edgier than the vast majority of modern Americana acts. LT & CP is loaded with Stones-y swagger and Telecaster-fueled self-assertion. In other words, it rocks.

Take, for instance, “The Love You Had,” a scruffy-sad anthem that has everything a proper country-rock ditty needs: dejection, rebellion, hooks, slice o’ life lyrics and a kickass guitar solo. “Because the years run by / So slow behind your eyes / But you age so goddamn fast,” Thompson sings in his forthright but unfussy style. His work is clearly bearing the fruit of maturity and perhaps some frustration, which means his songs now sting a little. This is a good thing.

“Pauses” displays the most growth in Thompson’s songwriting. It’s a stuttering, minor-key tune that fuses Tom Petty’s more accusatory numbers with something out of the pre-“Emotional Rescue” Stones catalog. Oh, and this is one of two songs to feature Grace Potter — a bona fide Vermont singin’ star!

Bottom line: The mainstream music world badly needs records like this to bubble up from “Real America” — aka, Vermont. Ask yourself, do you really want the future of pop/rock/country music to be decided by Billy Ray and Miley Cyrus? So snap out of that “American Idol”- and corn-syrup-induced stupor, America, and buy Lowell Thompson & Crown Pilot.