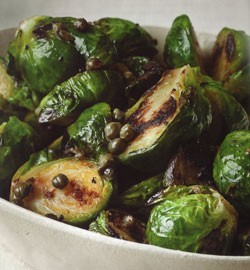 I have made many a dinner from Molly Stevens’ 2004 cookbook All About Braising: The recipes are delicious, the directions clear. Besides, one of the best things about winter is the aroma of a slow-cooked meal in the oven, not to mention sharing the one-pot wonders with friends. That book wasn’t a hit only with home cooks; it won awards from the James Beard Foundation and the International Association of Culinary Professionals. So when Stevens’ long-anticipated new volume arrived recently, I was eager to give it a try.

The Williston-based author and cooking teacher is serious about the “all” in All About Roasting: A New Approach to a Classic Art. Like the braising book, this one includes a generous compendium of information in the first section, from measurement conversions to the history of roasting to a lexicon of pan drippings. For rank beginners, this is invaluable, but even experienced cooks are likely to learn something new. What cuts of meat require a lower cooking temperature? What is the Maillard reaction? What exactly is happening when you let a cooked roast “rest”?

Stevens is a personable teacher with an intimate writing style and encouraging tone. She is firm on the science behind roasting, but lets you know when there’s wiggle room. “I’m not terribly strict about basting,” she confides. Elsewhere she observes that in researching the book, “I came across a technique I’d never heard of.” Hers is the voice of authority without being authoritarian.

At first I thought I’d just choose a dish in All About Roasting, make it and critique it for this article. But then I hit on the idea of inviting other cooks to contribute to a collective dinner. So I scanned the book, created a menu and invited six fellow foodies to join in the fun — and the review. I photocopied their recipe assignments and put them in the mail. On Saturday night, everyone showed up at my house with their respective dishes. What ensued was a leisurely and thoroughly enjoyable “potluck” with a little critique after each individually served course. I asked the cooks to comment on the recipe and preparation, and we all chimed in on the finished dish. The results? Read on.

This dish was our starter (though we also nibbled on cheese, crackers, olives and maple-candied nuts). Stevens notes in the book that she was on a beach vacation when she got the idea to swaddle shrimp in pancetta and roast it atop a bed of herbs. Any herbs will do, she says; their purpose is to keep the shrimp off the bottom of the pan, and their aromas infuse the seafood while also wafting pleasantly through your house. A little white wine (or dry vermouth) is poured over the dish before roasting, and the strained liquid is used to dress it before serving, as well.

Stevens claims the dish is simple, and on the surface, it is — not to mention a great way to use up some of those end-of-season herbs from your garden. However, my friend H. said wrapping the shrimp was a bit labor-intensive, and he wouldn’t make this if he had to prepare an entire meal by himself. Stevens does note that the shrimp can be wrapped and refrigerated up to six hours ahead of time.

We all agreed this recipe is a winner, but J. said it was a bit salty for her taste. Whereupon H. admitted he’d brined the shrimp beforehand in salt and sugar. (In our circle of friends, his brined holiday turkey is famous.) Being a salt freak myself, I didn’t mind the extra salinity; no doubt the pancetta was responsible for most of it. H. also said he used vermouth for the liquid; tarragon dominated the herb mixture, and its unique sweet-savory essence permeated, but did not overpower, the dish.

Even some devoted foodies cannot abide Brussels sprouts — particularly their vaguely sulphurous smell. But Stevens insists that aversion is probably due to growing up with a cook who did not know how to “splash the mini-cabbagey vegetables with olive oil and roast them in a hot oven until they were utterly tender and sweet.” That was certainly true in my family; my mother either boiled vegetables to death or fried them in Crisco. In adulthood I learned to like Brussels sprouts, even just steamed and dabbed with a little butter. But dressing them up like this elevates the lowly little side dish to center stage.

Brussels sprouts and capers may seem like strange bedfellows, so to speak, but the combination is totally inspired. “The capers and Brussels sprouts stand up to each other,” said one diner at my table. “Nice mouthfeel,” observed another. The little flecks of mustard seed were a nice touch. F. said the small amount of olive oil in the recipe was “a revelation” — she’d worried the sprouts would be too dry. On the contrary, they were soft but not mushy, the browned edges offering a bit of crunch. The lemony sauce brought out the vegetable’s inherent sweetness.

It was also a great suggestion, F. said, to line the baking sheet with parchment paper. The sprouts don’t end up sticking to the pan, and any excess oil is absorbed. However, she said she would decrease the 20- to 25-minute roasting time a bit.

There are few things my friend C. likes better than cooking, and he tested this Spanish-influenced recipe before making it a second time for our dinner — with more olives. For her part, Stevens writes that she gets “raves every time I make this.” Most likely it’s because of the compelling combo of dried apricots, olives — mixed green and black — and orange. And the pimentón, which adds a subtle smokiness.

Stevens recommends marinating the chicken, fruit and other ingredients overnight, which leaves the meat tender and allows the flavors to marry. Despite that wedding in the fridge, though, each party retains its individuality. C. said he used more than twice the teaspoon of orange zest called for in the recipe. He also noted he’d like to experiment with different kinds of vinegar in future iterations — the recipe specifies red-wine vinegar.

Most of us found the meat quite moist, but F. said her chicken breast was a tad dry. Possibly it was a smaller piece and hence cooked faster; Stevens advises removing small pieces of meat and keeping them warm while the larger ones finish cooking. In my own ongoing education about cooking meat (after being a vegetarian for half my life), I’ve found you really need to keep an eye on the stuff. Hello, meat thermometer!

As for this yummy dish, I look forward to making it myself. Although I love dried apricots, I think it would still be good without them if you have none on hand. Or experiment with other tart-sweet dried fruits, such as cherries or cranberries. To borrow a cliché, it’s all good.

Oh, and I almost forgot to mention that C. served this dish on a little mound of couscous.

My mouth began to salivate when I read this recipe, which is why I chose it for my contribution to the roasting dinner. I’m sorry to say it was somewhat disappointing. I think it was not the fault of the recipe, however, but of my bad timing.

Because two of the other cooks wanted to finish their dishes in my kitchen, I thought I should make my pork loin before they arrived and stick it in the warming oven until I could serve it. Unfortunately, the waiting process — and the additional heat — dried out the meat. In retrospect, I should have prepared it and stashed it in the fridge, then put it in the oven once we started on our first course. After all, it took us more than an hour to reach this point in the meal. Lesson learned. I also learned how to butterfly a pork loin without sacrificing any fingers.

I did wait to make the sauce at serving time. I used a good French brandy and crème fraiche (the recipe says that or heavy cream), and stirred a teaspoon of currant jelly in at the end. That may sound rich, but it was surprisingly light. For the stuffing, I used a Vermont-made sweet Italian sausage; I don’t think I’d want anything spicier for this dish. The dried prunes were a brilliant counterpoint to the savory sausage, little pillowy treats in the mouth.

(An aside: The next morning, determined not to waste what remained of the pork loin, I minced a slice of it into tiny cubes and sautéed them in a bit of butter. I threw in a handful of plump golden raisins, a cup of leftover fusilli, and a little salt and pepper, and produced a very tasty breakfast. With the extra fruit and fat, the meat no longer felt dry.)

On Saturday night, my companions kindly praised the pork, and I noticed most of them actually cleaned their plates. I think, however, that it was one savory dish too many; at my next roasting dinner, I’ll stick with a single meat entrée. For sure, we were all ready for dessert.

I gave B. two options for dessert; the other featured roasted apples and was certainly more seasonal. But she located some fat California plums and opted for this more unusual dish. Neither of us had ever roasted plums. And plums with ginger? Who knew that would be so good? B. said she shredded fresh ginger with a Microplane and used more than the half teaspoon called for.

In her intro to the recipe, Stevens notes that she once purchased a lot of plums over the summer at a farmers market and then sought ways to use them. Roasting them is quick and easy, and the addition of rum makes this “an elegant grown-up dessert,” she says (but you can skip the booze if you’re feeding children). Of course, butter, sugar and a vanilla bean work plenty of sweet alchemy on the fruit, as well.

B. noted that the roasted plums might have been better fresh from the oven; indeed, Stevens cautions that the fruit begins to sag if it sits for more than an hour. We also thought a bit more liquid would have been nice to spoon over the fruit before serving.

Still, quickly rewarmed and served with a dollop of vanilla ice cream, this lovely dessert earned kudos from all at my dinner table. I also passed around little glasses of Sapling, a maple liqueur made in Saxtons River, Vt.

I’m a big fan of roasted pears and think they would hold up to this preparation, too — perhaps served with a dash of mascarpone or crème fraiche instead of ice cream.

All of us thought of ways to alter our recipes, and that’s one of the reasons why cooking is fun. It also speaks well of All About Roasting: With her sound foundation and culinary creativity, Stevens inspires us to play with our food.