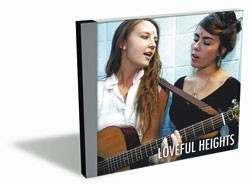 In a town like Burlington, a fine line often separates the crew occupying and staffing the hip local coffee joint — take a guess — and a hushed small-city “supergroup.” Such is the case with Loveful Heights.

While at its core Loveful Heights is a stripped-down acoustic duo consisting of Maggie Clifford and Kat Wright (of Kat Wright & the Indomitable Soul Band), the list of Burlington heavy hitters contributing their talents to the pair’s self-titled, debut full-length album is impressive.

Instruments like the tabla (an Indian percussion instrument similar to the bongo) and the occasional sorta-droning euphonium (a somewhat lesser-known brass instrument) introduce more than a hint of the bazaar into the clearly travel-inspired songs that inhabit Loveful Heights’ debut.

The production, credited to one Lee Anderson — Wright’s husband and the proprietor of the previously insinuated café, Radio Bean — is sparse and airy and gives all 12 tracks on Loveful Heights a consistent, breathy quality. The room in which these songs will forever exist deserves as much credit as does any of the players. It’s an undeniable presence.

The songs themselves range from adaptations of poetry classics (Robert Louis Stevenson’s “Land of Nod”) to traditionals (“Gamblin’”) to lonesome, worldly originals (“Freedom”). Vocal harmonies, which are no doubt the focal point of this record, are somewhat reminiscent of Feist’s softer excursions — songs like “The Park” and “Lonely Lonely.” But where Feist overdubs her vocals, Clifford and Wright have each other’s same-room voices to bounce off of. This small but noteworthy difference gives their work a much more organic feel than Feist, with all of her talent, can achieve. That’s right, organic.

The ease with which Loveful Heights is performed, recorded — by Burlington’s unstoppable Ryan Power — and delivered is truly a marvel.