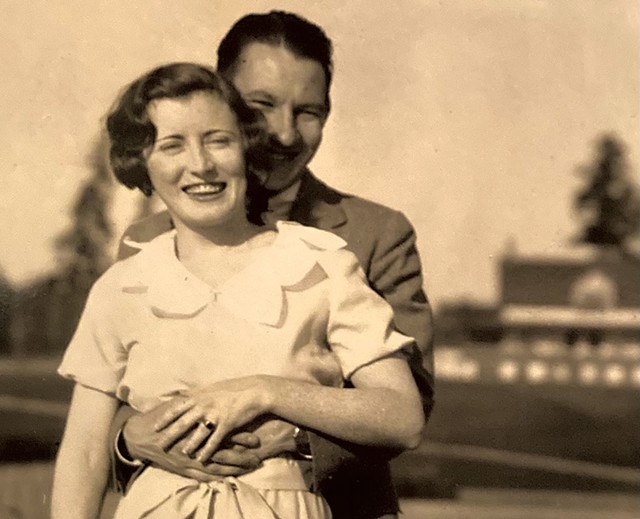 To-day my thoughts wandered back to our evening together out on Smith's road on Saturday and I thought of holding you close to me and I could actually hear and feel you breathing. But I don't know what comes of all this thinking except pleasant memories of the past and a grim realization of the circumstances of the present.

Ali Waltien didn't expect much when she read the email's subject line: "Grandparent Letters." A child life specialist at the University of Vermont Medical Center, she routinely coached her clients and their families through end-of-life work, including helping terminally ill patients write letters to loved ones.

"It didn't really register that it was anything unusual," Ali said of the January email. "But then I read it."

The message was from a stranger to Ali named Peggy Kelehan. In 2014, Kelehan was helping clean out the Saranac Lake, N.Y., home of a recently deceased friend when she discovered a box hidden deep behind a stairwell. The box was stuffed with dozens of yellowing letters postmarked in the early 1930s. Her late friend's sons had never seen the box before, nor did they recognize the names on the envelopes: Stevenson Waltien and Frances O'Brien.

"She thought the letters might be from the sons' grandparents, but they weren't — they were from ours," Ali explained, referring to herself and her brother. "They were love letters. It was our grandparents' house, the house our dad grew up in."

Last month, Kelehan, a retired nurse in Connecticut, sent the box to the Waltien family in Vermont, roughly 90 years after it had been tucked away in a crawl space and forgotten. The letters it contained, about 140 in all, were written between 1930 and 1932, when Steve and Frances were patients at the Trudeau Sanitorium in Saranac Lake, now called the Trudeau Institute. Back then, the facility was regarded as one of the premier "curing centers" for the treatment of tuberculosis. To this day it remains a hub for the study of infectious diseases.

Steve and Frances met and fell in love at Trudeau, which at the time included a cluster of cottages where TB patients convalesced, often sitting outside on porches. The prevailing theory, fostered by institute founder Dr. Edward Livingston Trudeau, was that the brisk and invigorating North Country climate was key to tamping down the effects of the "wasting disease."

But cold, it seems, wasn't the only thing in the air at Trudeau during Steve and Frances' stay.

Trudeau patients tended to be in their early twenties, and recovery from TB wasn't always linear. During stretches of relatively good health, the residents apparently behaved the way twentysomethings always have, which accounts for the sometimes-soapy quality of Steve and Frances' letters.

"It seems kind of like a summer camp vibe," Ali said, "but with the backdrop of this serious illness."

"They can toggle between feeling so light ... gossipy and fun," Steve III, Ali's older brother, said of the letters. "But then there will be a line that drives home how grave the situation is."

"If all the girls in Trudeau were to be mixed together and the finest qualities taken from each one and these qualities put together to form a composite girl, she could not hold a candle to my sweetheart," Steve wrote on August 24, 1930.

In his next paragraph, the mood changed: "And still more seriously — please take it very easy, honey and get well as quickly as possible and we will have better times than ever. I know that you don't like to stay in bed and I don't like to have you find it necessary to be there but I do want you to get back to good health..."

Steve and Frances' correspondence during their time at Trudeau offers snapshots of their blossoming relationship interspersed with day-to-day minutiae, gossip and updates on their health — weight and temperature check-ins were particularly important. At times, the letters read like the pages of an old-fashioned romance novel, progressing from cautious courtship to giddy proclamations of love.

"In 333 hours we'll be in each others arms again and then the world will begin moving again for us," reads an October 10, 1930, missive from Steve. "Good-bye until to-morrow," he continued before signing off. "All my love (which is more than I ever knew I had), Steve."

While the rediscovered letters are charming and touching, the Waltien family sees them as more than just slightly voyeuristic heirlooms.

Ali, 37, and Steve III, 42, grew up in Shelburne and never knew their grandparents. Frances died of cancer in 1963. Grandfather Steve followed in 1973 — almost a month to the day after the couple's only child, Steve Jr., married his wife, Lynda.

Steve Jr. died suddenly in 2010, and with him went the family's last link to his parents. Ali and Steve III said they hear echoes of their father in his parents' letters.

"Our grandfather's letters almost always have detailed plans for how and when they'd meet," Steve III explained, "which makes sense because that was really the only way they could correspond — it's not like they had cellphones.

"But our dad was like that, too," he continued. "If you were coming home, he'd call you, like, three times to make sure you knew what flight you were on."

After discovering the letters, Kelehan held on to them for six years; Steve Jr.'s obituary finally gave her the clues she needed to find the surviving Waltiens and return the correspondence. Meantime, she pored obsessively over Steve and Frances' writings, fascinated by the love story of a young couple to whom she had no connection beyond a fluke of real estate.

"I just thought they were so beautiful," Kelehan said.

For a time, she envisioned writing a book about the letters, which she planned to call Love Letters From the Cure. Through the blooming romance of Steve and Frances, she felt a strong connection to her own past. Kelehan's husband died of a brain aneurysm 21 years ago at age 48.

Most of the letters are from Steve to Frances; only 15 or so are from her to him. That's likely because Frances tended to be sicker than Steve. He was able to come and go from Trudeau, while she mostly remained there until the couple married in 1932.

"You've gotta have hope, because that's what love is about." Peggy Kelehan tweet this

Where Steve's professions of love can border on the maudlin, Frances' writings tend to be more reserved, though no less tender. "We have been having funny weather — snowing on and off," she wrote on March 25, 1932. "The sun hasn't been shining since you left (and it won't shine again for me until you return)."

"I felt like she wasn't sure she was going to survive. And a lot of people did not survive tuberculosis back then, so she was less open, more cautious," Kelehan said. "But you've gotta have hope, because that's what love is about.

"So that's what Steve was doing: He was keeping the hope alive in her," she went on. "He felt like, You are gonna survive this. And we're gonna make plans and have a life together."

He was right. But even though the couple's grandchildren know the outcome of the correspondence, the letters still hold suspense for them, they said.

"I'll find myself reading the letters and [be] genuinely concerned about what's going to happen," Steve III said. "But of course I know everything worked out, because I'm here now reading them."

Among the many remarkable aspects of the letters is the timing of when they reached the Waltiens. Ali left her job at UVM Medical Center only a week after Kelehan initially contacted her through her work email address. Had Kelehan not sent that email when she did, she might never have reached Ali.

Then there's the context of the current global health scourge.

"If we had read these letters two years ago, I'm sure they would have been impactful and every bit as interesting," Steve III said. "But [the letters are] all about being in quarantine and being sick and, for them, the world stopping. And that's exactly what we're living through right now."

The pandemic has drawn the Waltien family into closer proximity. Ali lives in Ferrisburgh with her husband and their young daughter. Steve III, a staff writer on "The Late Show With Stephen Colbert," normally lives in Brooklyn with his wife and their young son. But he and his family have spent the bulk of the pandemic living in Shelburne with his mother and her partner.

"It's this crazy time when the world is standing still; we're in a quarantine, the people writing the letters are in quarantine, and we're able to be together and read them," Steve III said. "I'm sure it's lost on the kids, but I can point to [my son] and say, 'Buddy, that box of letters right there, that's the reason you exist.'"

It wasn't a given for Steve and Frances that there would be grandchildren to read their letters, let alone great-grandchildren.

"To have survived through that sickness, the two of them, and then to go on to have a family, it's just a fabulous, fabulous love story," Kelehan said. "It just swells my heart with joy that the letters are where they need to be."

Perhaps after all these years, they just needed the right postage. As Steve wrote to Frances on August 24, 1930, "I'm afraid that if I close this with all the love I want to send you I'll have to put on an extra stamp."

Disclosure: The author is a longtime friend of the Waltien family.