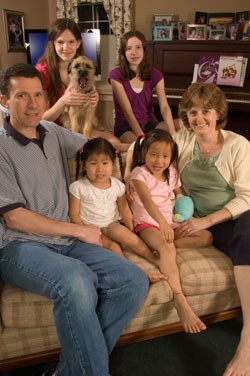 Five years ago, Jacci and Mark Winchester came to a crossroads. The couple had two healthy children, good jobs, a nice house and financial stability. But they wanted something more.

They could have bought a bigger house or a fancier car or taken longer vacations. Instead, the Colchester couple decided to expand their family — by adopting.

But it wasn’t an average adoption.

“We said, ‘Let’s extend ourselves and help a child out. Let’s adopt a child who would be hard to place,’” Jacci Winchester says.

After exploring and rejecting the domestic adoption options and getting input from their two biological daughters, the couple chose to adopt a little girl from China who has special needs.

Leanne, now 5 years old, came to the Winchesters with a hole in her heart, for which she may need minor surgery in the future. She was diagnosed with infantile scoliosis and has required intensive physical therapy to help her with strength and balance.

The Winchesters are among a small but growing number of families choosing to adopt children with special needs from outside the United States. While there are no solid data on the number of international special-needs adoptions in this country, agencies say this is an increasingly attractive option for parents who want to adopt.

One reason, says Ann Clark, who runs Adoption Advocates in Shelburne, is that the number of “healthy” babies available for adoption in other countries has dwindled. In 2004, the peak year for international adoption, 22,884 adopted children entered the U.S. By 2009, the number had dropped to 12,753. The decline is due in part to the decisions of nations such as Vietnam and Guatemala to close their borders to international adoption over ethical concerns.

Another explanation for the drop is that some “sending” countries, such as China and South Korea, are seeing more healthy children adopted domestically. Clark views this as a “wonderful” sign for those nations, indicating an increased willingness and capacity to care for their own. But it also means the pool of children who have traditionally been adopted by Americans, Canadians and Western Europeans is becoming ever shallower.

In years past, domestic adoption was a viable alternative for families that, for various reasons, would or could not give birth to their own children. Now, that’s barely an option. Because of the wide availability of birth control, the lessening stigma of bearing a child out of wedlock, and efforts to keep children in their birth families, domestic infant adoptions in the U.S. are rare.

While there are older children in state custody waiting to be adopted, many people don’t want the stress of knowing a child’s birth family is out there, says Mike Joyce, a post-adoption social worker with Casey Family Services. But, he asserts, adoptive families all have to deal with birth-parent or country issues, regardless of whether they adopt in the U.S. or abroad.

American families who choose the second option can wait years to get referrals, because the demand for healthy children is greater than the supply. Sick children who cannot be treated in their own countries are often at the top of the waiting list, says Barbara Davis, who runs the Vermont office of the Angels’ Haven Outreach adoption agency. For people who choose to take on a child with special needs, which can range from albinism to HIV, the wait can be considerably shorter.

Clark, who has worked in international adoption for 29 years, is quick to point out that most adopted children coming from other countries have special needs of some kind, but not necessarily illnesses or physical impairments. Years spent living in an orphanage can cause significant emotional trauma, she says. Many children need special attention and one-on-one care regardless of their physical state.

Adopting a child with special needs isn’t for everyone. It takes a special kind of person or family to take on a child with full knowledge of their serious problems and love them just the same, Davis says. She looks for prospective parents who are flexible, mature and selfless, and have a sense of humor and parenting experience, especially if they’re adopting an older child. Because adoptive parents are often already dealing with intercultural or interracial questions, the ability to juggle multiple issues is a must.

When the Winchesters decided to adopt, they entertained the domestic foster-to-adopt route, but after a trial period with a foster child, they decided against it. The child behaved threateningly toward the couple’s other two children, and Jacci Winchester says she couldn’t take the risk. Plus, she was concerned about potential contact with a foster child’s biological parents.

China, which has an extensive special-needs adoption program, seemed to fit what the Winchesters were looking for. Early in the process, prospective parents are given a list of issues and asked to check which ones they would feel comfortable handling. The most common include cleft lip and palate, fetal alcohol syndrome, tuberculosis, hepatitis B and C, missing digits and extremities, and kidney problems.

Because one of their biological daughters had a heart defect, the couple figured they could reasonably care for a child with a similar ailment, and checked the corresponding box. It took just seven months for the Winchesters to get a referral. In 2005, Leanne joined their family from an orphanage in Yunnan Province in southwestern China.

Though Leanne’s heart problem turned out to be minor, surgery may still be in her future, and she wears a brace for her infantile scoliosis.

The Winchesters are a family that’s all about kids. Mark, a fifth-grade teacher, and Jacci, a software engineer, believe in “the more the merrier.” “Some people have that in their heads — that two kids are enough. I don’t have that,” Jacci Winchester says. “I would keep going if I could.”

Unlike the Winchesters, Dina Wolkoff and her husband, Tal Birdsey, never intended to adopt a child with special needs. When the Ripton couple decided to adopt five years ago, they considered that option, but fear of the unknown made it too hard to say yes.

What they did know was that they wanted a child from China. Both had lived and worked there years ago and had a special attachment to the country. “The child wouldn’t be foreign to me,” says Wolkoff, who speaks fluent Mandarin.

After waiting years for a healthy Chinese girl, Wolkoff, an advancement officer at Middlebury College, and Birdsey, the headmaster of independent North Branch School, had a change of heart. They began to think seriously about which special needs they might be able to handle. “Our hearts opened and our minds opened,” Wolkoff says.

Like many parents who adopt children with health issues, Wolkoff felt comfortable taking on a problem that was fixable, such as a cleft lip and palate. In China, most orphans don’t have access to surgical solutions to these conditions, but here in the U.S. they are common and can generally be repaired. Wolkoff says the family knew its limits.

In March, the couple flew to Gansu Province in northwest China to pick up then 20-month-old Dalia. Waiting in the U.S. consulate to get Dalia’s paperwork, Wolkoff says she was amazed at the breadth of some of the children’s needs. While Dalia will need several operations to fix her palate and years of occupational and speech therapy, there are plenty of adopted children whose medical problems cannot be remedied.

The Winchesters faced that reality when they adopted a second Chinese child with special needs. The couple wanted Leanne to have someone in the family who looked like her, they say. But this time, after their experience with Leanne’s scoliosis, they decided they could handle more. Mei, a toddler with spina bifida in Jiangsu Province on China’s east coast, was referred to them — and, says Jacci Winchester, they couldn’t say no.

But before they committed to the adoption, the couple had to ask themselves some hard questions. Were they capable of taking care of Mei over the years as her disease progressed? Could they deal with knowing she might not be able to walk?

The Winchesters took what adoption expert Davis calls “an incredible leap of faith.” Not only did Mei have spina bifida, an incomplete development of the spinal cord or the vertebrae that cover it, but she also suffered from obstetrical brachial plexus, an impairment of her left arm incurred during childbirth. Her condition worsened during the adoption process.

When now 4-year-old Mei arrived, the Winchesters took her to the specialty clinic at Children’s Hospital Boston, where she now returns every six months for treatment. Jacci Winchester acknowledges that they’ve made sacrifices — in time, money and expectations — but insists the benefit to her adoptive children and her family is worth it. Regarding Mei in particular, Winchester says, her chances of survival as an orphan with a serious illness in China would have been low.

“For the kids, it’s a rags-to-riches story. You’re truly helping a child and allowing [her] to have an equitable chance at life,” Winchester says.

Winchester knows her children will most likely have to deal with their respective medical issues for a long time, if not all their lives. Spina bifida does not go away, though difficulties caused by the defect can be treated. She views her role as helping set up her kids for success, whatever that may be.

“As a parent, you want your children to be happy and independent,” Winchester says. “You want them to fly away.”