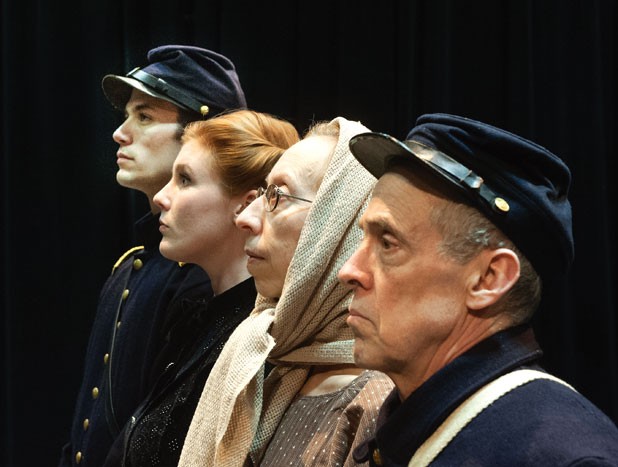 2011 marked the 150th anniversary of the start of the Civil War. Still commemorating this event two years later, PBS recently rebroadcast Ken Burns’ epic 1990 documentary The Civil War. Steven Spielberg’s 2012 film Lincoln recounted the president’s efforts to obtain passage of the 13th Amendment to formally abolish slavery. And now we have Ransom: A Musical Play of Vermont’s History in the Civil War at Lost Nation Theater in Montpelier, opening this Friday, April 26.

The word “musical” may conjure a lighthearted romp through one of America’s darkest chapters, or perhaps a satire along the lines of “Springtime for Hitler” in Mel Brooks’ The Producers. But no. Ransom is a drama inspired by actual letters written on the battlefield by a Vermont soldier, Lt. Ransom W. Towle.

Towle, a 25-year-old medical student and farmer when he went to war, became a Civil War hero. He sent his letters home to family, friends and neighbors in Rochester. Ransom’s script incorporates these letters and the recipients’ responses, as well as others from Vermont wives to their husbands detailing the hardship of managing the farm, animals and children without their men.

When Rochester historian Joe Schenkman was researching the town of West Rochester at the Vermont Historical Society in 2010, he came across a box containing Towle’s diary and 31 letters. In the diary were day-to-day notes and a record of the soldier’s letters sent and received. Towle also wrote “Narrative of an escape from rebel captivity,” which recounted his capture by the Rebels, his escape and journey back to Union lines. The Vermont Historical Society published it in the early 20th century. Mortally wounded at the Battle of Winchester, Towle died on September 20, 1864.

Lost Nation’s real-life drama was written by Richard Robson in collaboration with Schenkman, intern April Dodd and director Ethan Bowen. It was originally developed by Rochester’s White River Valley Players, which Robson founded with his wife, Dorothy Robson, in 1979.

Dorothy Robson and songwriter/instrumentalist Jake Wildwood composed Ransom’s original music. Traditional period music is also woven through the play, and a quartet that functions as a Greek chorus comments on the action. Musical director Rip Keller and choreographer Taryn Noelle are working with a multigenerational cast of 20 actor-singers and a four-piece band.

Director and LNT cofounder Kim Bent, a seventh-generation Vermonter, is passionate about bringing this production to life. “Much of the script is verbatim,” he says. “Ransom’s letters and others during that time give us a wonderfully immediate sense of the hardships endured on both the battlefront and the home front.”

“I find this show incredibly moving, because it humanizes the statistics and ideals,” adds Kathleen Keenan, producing artistic director of Lost Nation. “Even the women and children left behind had their own war with survival. This play honors the sacrifices all people make during war.”

Chicago actor Aaron Aubrey plays the title role — his seventh appearance at LNT. “I’m usually playing idealized characters,” he notes. “Ransom is a real person, and all the events really happened. It is a joy and challenge acting in an older time period.”

A refrain in Ransom is the question, “Remember? Will we remember?” Bent’s response: “I think plays like Ransom … help us to understand how polarized we are as a nation today. Hopefully, they can inspire us with renewed energy to continue the fight toward consensus and unification.”

"Ransom," produced by Lost Nation Theater in Montpelier City Hall Auditorium. Preview on Thursday, April 25, at 7 p.m. $15. Gala Opening on Friday, April 26, at 6:45 p.m., with Civil War historian Howard Coffin and music by Cold Country BlueGrass Band. $60/30. Performances Thursdays and Sundays at 7 p.m., Fridays and Saturdays at 8 p.m., and Saturdays also at 2 p.m. through May 12. $10-30. lostnationtheater.org