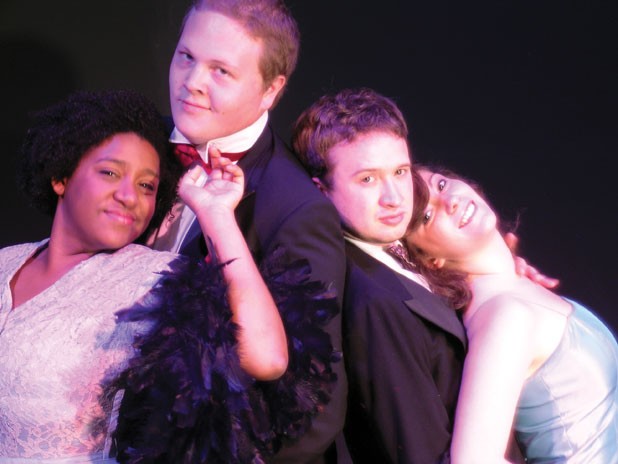 What kind of show lacks dialogue, plot and characters, but still makes for an engaging evening of theater? The answer is the revue, a music-driven genre that features songs — connected by composer, theme or period — and usually lots of dancing. Fran Charnas’ The All Night Strut (1975) opens Thursday at Montpelier’s Lost Nation Theater. It covers “an arc of music from the early ’30s to the early ’50s,” says Tim Tavcar, who directs and choreographs the production. “In a revue, particularly one like this, each song is its own little universe,” he explains. “It has its own story to tell.”

Strut mixes well-known tunes, such as Cab Calloway’s “Minnie the Moocher” and Jerome Kern’s “A Fine Romance,” with perhaps less-familiar ones, such as Glenn Miller’s “Jukebox Saturday Night” and Frank Loesser’s “Praise the Lord and Pass the Ammunition.” Besides making each number “pizzazzy and jazzy when necessary,” Tavcar says, “I’m trying to give a sense of a little journey in each and every song that’s different.”

The vintage tunes appeal to a wider demographic than just “old gray-hairs like me,” Tavcar emphasizes. “Now there’s this relatively significant rediscovery by the younger generation of the swing era,” with dance clubs dedicated to the music. “It’s very sexual and sensual,” he continues. “You’re actually relating on a bunch of different levels, including the physical, when you perform this stuff.”

Tavcar enthuses about his ensemble’s energy. And he hopes theatergoers also get into the spirit, because he has special plans for drawing them into the fun. He has reconceived City Hall Auditorium as a nightclub. “We’re actually tearing out the first row of seats on the floor and putting in cabaret tables,” he reveals. The tux-clad pianist will play while the audience walks in. “We’re trying to make it as atmospheric as we can.”

Audience members can sit at the small round tables. During the show, singers will snake around them as if crooning “in an old-fashioned supper club,” Tavcar says.

He encourages attendees to don dressy threads and, in particular, to wear their dancing shoes. Act I ends with “In the Mood,” during which the cast invites plucky patrons to prance onstage alongside them. If they’re in the mood, that is; audience participation is not mandatory.

But no one can resist connecting with this music, he believes. “These are some of the most enduring songs in the Great American Songbook,” he says. “It’ll be a wonderful trip down memory lane for some of the audience.” For others, “it will be a fabulous discovery.”

For the director, Strut has a personal, hometown connection. “I know this play very well, because I was there at its inception,” Cleveland native Tavcar recalls. “It actually premiered at a seedy, smoky nightclub called Pickle Bill’s, on the banks of the Cuyahoga River.”

Strut then became the third revue staged in the dilapidated lobby of a 1920s movie theater, as artists tried to prevent historic structures from being razed. The rehabbed buildings eventually became the vibrant Playhouse Square and kicked off artistic and architectural renewal throughout Cleveland’s downtown.

Who knew that “just” singing and dancing could accomplish so much?