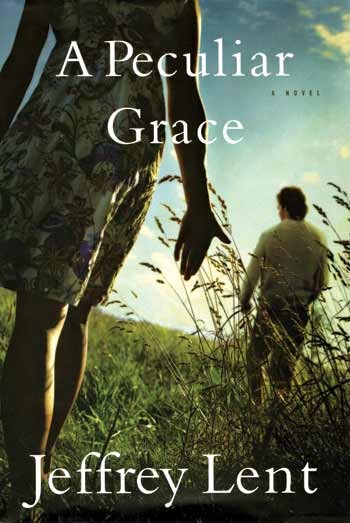 Even the most eloquent drunk is still a drunk. To apply that statement a bit more broadly, sometimes there's great poetry in obsession and addiction - in the determination with which people repeat the same failing strategies over and over, as if this time they might work. Burlington author Jeffrey Lent taps that vein in his third novel, A Peculiar Grace. Once you've caught the almost hypnotic rhythms of the author's language, it's hard not to hum along. But over the long haul, Lent's protagonist wears out his welcome, like the lyrical tippler who's so busy telling you his life story that he doesn't hear last call.

Lent's focal character, 43-year-old Hewitt Pearce, is an obsessive, slow-to-change man. Those qualities mirror the world he lives in, which is still driven by the seasonal ebb and flow of Vermont farm life. Hewitt's mobility is limited - decades ago, he lost his license after one too many DUIs. When it comes to change, he's as obdurate as the iron that he pounds into gates and hitching posts on commission, always more to his own specifications than the client's. He's one of those ornery Vermont craftsmen who impresses city folk with his insistence that the work will be done when it's done.

But outside Hewitt's world is another world, one that sometimes changes at lightning speed. It's the world of Emily, the girl he met in the Finger Lakes region when he was a teenage apprentice blacksmith and hasn't stopped loving in the ensuing 23 years - keeping tabs on her from afar as she started a career and a family with someone else. It's also the turbulent world that one day spits out a vagrant - a young woman named Jessica, driving a crazily painted VW Bug and spouting paranoia. She claims to have landed on Hewitt's property on her way to Austin, Texas - from Mississippi.

Cherishing his solitude, but wanting to "offer kindness in a world that was largely shorn of kindness," Hewitt takes the girl in. Jessica is bright, mordantly witty and unpredictably violent, and she makes his life interesting. But not so interesting that he doesn't take notice of a radical change in Emily's life, one that just might give him an opening to walk back into it.

A love that endures 23 years of separation? For many readers, this may seem like Wuthering Heights territory - and indeed, when Hewitt declares his feelings, his language recalls that of Emily Brontë. ("You've never left me . . . I'm a middle-aged man who knows better but still believe you're my twin, my missing half.") As Lent is narrator puts it, "Passion has no degrees. It's either the wildfire burning in your heart or it's nothing."

Anyone can write a love story, but it takes a real artist to bring us inside this sort of romantic madness. Lent pulls it off by using extended flashbacks to show us Hewitt and Emily's relationship as it progressed from idyllic meeting to last farewell. Their story starts in the summer of '76, and its course resembles that of the nation's: a last gasp of dope-fueled, '60s-style bacchanalia, followed by the setting in of harsh realities. Extreme as it is, Hewitt's refusal to live in the present resonates with anyone who's ever regretted the passing of a time when everything seemed possible.

Lent's prose has two registers. One is solemn, third-person narrative with long sentences and sparse punctuation - a self-consciously modernist style that can dip close to stream of consciousness. The other is dialogue that's rich, colorful, colloquial and often funny, whether Lent is conveying Jessica's Southernisms, the Irish-tinged speech of Hewitt's mother or the laconic, lock-jawed talk of his farmer neighbors. Though the narrative passages are highly mannered, somehow the combination works. Lent can rise to Joycean heights, as when he evokes the power of memory in Hewitt's inner life: "It was no mystery that those long days of young adulthood would stand in vivid contrast to the otherwise downpouring of the years - not only moments but entire days etched forever vivid as if that very morning."

More than a love story, A Peculiar Grace is an old-fashioned Künstlerroman, or tale of an artist - one whose sense of loss drives him first to despair and drink, then to his art, then back to despair, in a seemingly unbreakable cycle. (To increase the sense of repetition, we learn that Hewitt's deceased father was a reclusive painter whose early life was also shaped by traumatic loss.) Time and time again, Hewitt retires from the chaos of life to his forge, "where things could be reshaped. Or find the shape they sought. Or his shape found within them."

And perhaps that's where Lent should have left it. Instead, he struggles to give Hewitt's story a conventional dramatic resolution by piling on family soap operas, emotional blowups and an ending that reads way too much like self-indulgence, with none of the flintiness of the novel's opening pages.

There are the makings of a shorter, better book here, one that would evoke but never embrace Hewitt's self-absorption. Lent can't always resist the temptation to make his characters iconic, larger than life, which doesn't serve them well. Still, for some passages alone - ones where Lent deftly interweaves landscape and feeling and the stark material details of life on a dirt-road farm - A Peculiar Grace should be considered a great Vermont novel. It captures the cast of the light, the bite of the wind and the conflict between old ways and new. And for that, we can forgive the author for rambling past closing time.