Nora Ganley-Roper was a wine expert at the storied Astor Wines & Spirits in New York City when she fell in love with whiskey. She had grown up under the tutelage of her wine-appreciating family in Weybridge and honed her expertise in grapes and regions by reading wine textbooks while commuting by bus to a job in the financial world.

As sales manager for the large specialty wine and spirits company, Ganley-Roper discovered in whiskey a new world of tasting, science and history. She absorbed as much as she could about the distilled beverage, which is made from grain, because she needed that knowledge to serve her customers. She enjoyed discovering the business of American whiskey, in which — as with wine — terroir plays a major role in the taste and feel of the beverage. She was also intrigued by the potential for learning more.

"Even working in one of the best spirits stores in the country, it was hard for me to know what was out there, because a lot of things didn't make it to New York," Ganley-Roper said. "And if they did, you couldn't tell from the packaging if it was good."

Now Ganley-Roper — with her husband, Adam Polonski, who is also steeped in the world of spirits — is back in Vermont. The two founders recently raised $1 million from investors and are searching for warehouse space. The goal: to build Lost Lantern, a business that shines light on little-known whiskeys from around the country by bottling and blending them.

Over the last few decades, whiskey making has undergone a transformation similar to that of beer brewing. Small, local operations continue to spring up as alternatives to mass-produced brands. Twenty years ago, Polonski said, there were only about 25 distilleries in the U.S.; now there are more than 2,000. Ninety percent of the country's distilleries have opened in the last 10 or 12 years, he noted.

Some of these distillers are in Vermont, including Smugglers' Notch Distillery in Jeffersonville, Mad River Distillers in Warren and Hooker Mountain Farm Distillery in Cabot. One of the best known is Shoreham-based WhistlePig, a blender and distiller that has won several top awards and, in July, acquired Otter Creek Brewing and the Shed Brewery in Middlebury. 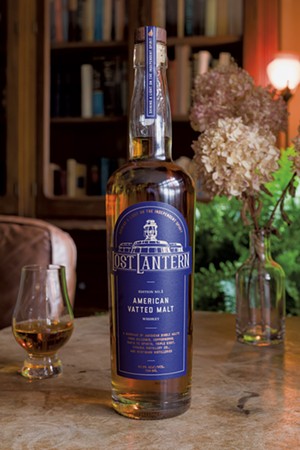 Lost Lantern doesn't make whiskeys but rather procures them to bottle as they are or blends them to create unique, high-end products. Most of the whiskeys found on store shelves are blends, unless they're marked as single-cask or single-barrel.

"Single malt whisky can have a lovely individual flavour, but it's one dimensional and doesn't have many facets. You can produce something far more complex with blended whisky," Chivas Regal's master blender, Sandy Hyslop, writes on the Scottish company's website, using British spellings.

Lost Lantern prioritizes creating a taste that reflects the region where the whiskey was made.

"We find that whiskeys in cooler climates, like New York or Washington, often are creamier — both in flavor and in the mouthfeel — and will often have more floral or herbal notes to them," Roper-Ganley said. "On the other hand, whiskey from places like Texas and Arizona is dense [and] baking spice-driven and tends to have a heavier palate."

The couple has put out 24 single-cask whiskeys since they started in 2020 and now has 10 available for sale.

In describing rye whiskey 2022 Single Cask #8: Dad's Hat from Pennsylvania's Mountain Laurel Spirits, 20 miles northeast of Philadelphia, the Lost Lantern website offers a brief sketch of the area's distilling history, which dates back to the colonial era but had disappeared by the 1990s. Of the whiskey itself, the site reads, "It is fresh and grassy, with spearmint on the nose and candied orange, chocolate, and clove on the palate."

Capturing every region is more complex with Lost Lantern's American Vatted Malt Edition No. 1, the only blend the company has released so far. It combines the single-malt whiskeys of six distilleries, from Nantucket, Mass., to Santa Fe, N.M.

"Chocolate-covered orange peel and fire-roasted fruits lead on the nose," reads Lost Lantern's tasting notes. "The palate is complex and balanced, with rich baking spice, salted pretzel and hints of roasted barley surrounded by a savory smokiness. The long, warm finish has notes of milk chocolate and sea salt."

Although it only uses one Vermont whiskey — the one produced by Village Garage — Ganley-Roper and Polonski want Lost Lantern to become a well-known luxury whiskey brand rooted in the Green Mountain State. Through its website and in stores, the company sells a 750-milliliter bottle of its single-malt, bourbon and rye whiskeys for between $70 and $160.

Like Ganley-Roper, Polonski brings stellar credentials to Lost Lantern, including more than a year as senior whiskey specialist at the influential Whisky Advocate magazine. In keeping with the preferences of today's high-end whiskey consumers, he'd like Lost Lantern to release one blend at a time, offering a variety of flavor profiles. On the website, Lost Lantern promises its customers transparency about where its whiskey was blended and how it was made.

"It's never going to be a million-case brand like the giant bourbons, and we don't want it to be," Polonski said. "We want it to be a whiskey that people can get their hands on and use to discover flavors that aren't seen elsewhere." 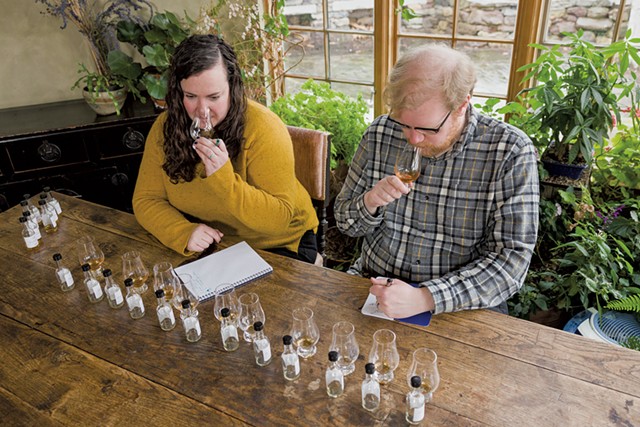 Polonski said many of the small distillers he visits around the country focus on serving their local market. He relies on word of mouth to find them and spends time with them sampling their wares.

"They may make amazing whiskey, and you can't get it beyond that area," Polonski said. "We find the ones that we think, based on our professional background, are the most exciting and interesting."

Lost Lantern got its start after Ganley-Roper and Polonski met online in 2014 and discovered a mutual appreciation for wine and spirits.

"It was nice, early on in dating life, to fall back on nerding out on whiskey and wine," Ganley-Roper said. The company released its first whiskey in 2020, the year the two, now both 36, were married at the home of Ganley-Roper's parents.

In preparation for starting the company, the pair used savings and family loans to tour the country and sample whiskey for eight months in 2018 and 2019.

"All told, we have visited well over 100 distilleries at this point," Polonski said.

Their business model is complex. Though they taste their own blends at home in Ferrisburgh and do their blending and bottling in Bennington, they sell through two distributors: one in Washington, D.C., and one in California.

It's unusual for a Vermont food and beverage startup to raise $1 million in traditional venture capital. A key Lost Lantern investor is FreshTracks Capital in Shelburne, which also backed Caledonia Spirits, the maker of the popular Barr Hill Gin.

"That has gone well," FreshTracks partner and managing director T.J. Whalen said of the Caledonia investment. "That company is much larger now, and successful." Caledonia invested $10 million in a stylish distillery and tasting room complex that opened in Montpelier in 2019.

"That gave us some confidence that we can and should do more," Whalen said.

The Dudley Fund and Vermont Center for Emerging Technologies — where Ganley-Roper and Polonski often use coworking space — are also among the many investors.

Most of the couple's customers are from out of state. Lost Lantern sold 2,300 bottles of whiskey in 2021 and expects to sell 5,000 to 6,000 by the end of this year. Its whiskey isn't yet sold in Vermont stores, but Roper-Ganley said customers can special-order it through stores, and Lost Lantern plans to get limited placements in Vermont liquor stores after it has its warehouse space in order. The owners also plan to open a tasting room.

Ganley-Roper, who worked in the financial industry for five years, said traditional investors have started looking more closely at small food and beverage startups in the last five years; more of them have been acquired by larger companies, sometimes for very large sums. The rise in activity has helped those investors home in on a value for small, sometimes quirky companies.

"That's why we're able to get investors who historically haven't been interested in food and beverage," she said.

"His job was to literally scour the country for the best whiskeys and establish relationships with those distilleries and provide a score," Whalen said of Polonski's charge at Whisky Advocate. "He has a really sophisticated approach to blending and an incredible network of relationships."

Meanwhile, he said, Ganley-Roper was choosing whiskeys that Astor would carry on its shelves.

"I bet there probably aren't too many other two-person teams out there that have better relationships with craft whiskey distillers in the U.S.," Whalen said.

The original print version of this article was headlined "Independent Spirits"