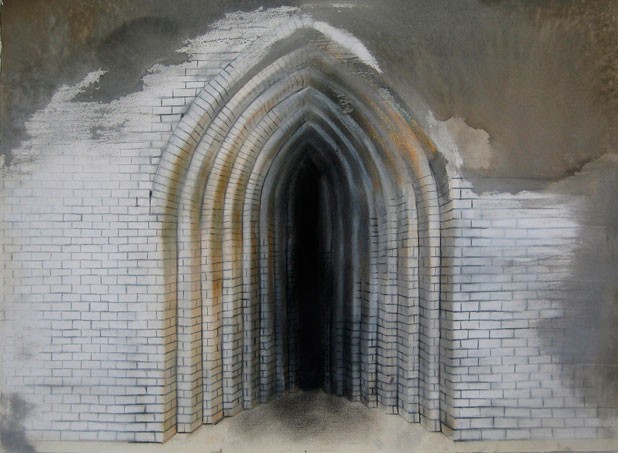 Visitors to the “Adam Putnam: Magic Lanterns” exhibition now at the BCA Center will no doubt be drawn to the show’s eponymous “lanterns” installed in the front and back rooms of the gallery — “Untitled (Red Hallway)” and “Untitled (Green Hallway),” respectively. The devices, which date to the 17th century and much later figured in early motion-picture development, here project unpeopled architectural interiors upon the walls. But while the murky, seemingly endless rooms are intriguing, viewers should not dismiss Putnam’s one small, black-and-white photograph and five modest drawings in the BCA’s front room: Despite the show’s title, these works represent the heart of the exhibition.

Putnam’s compelling mixed-media works on paper are deft renderings of imaginary structures — architectural fragments with undefined interior and exterior spaces, like the ruins of a past civilization. He describes these works as “fragments of spaces.” In “Untitled (Entry)” and “Untitled (Slit),” these spaces appear infinite and not confined to the paper, frame or wall.

In “Untitled (Entry),” Putnam has filled the entire drawing surface with a red-brick wall interrupted by a crenulated passageway. One side of the wall remains unfinished, perhaps suggesting an infinite, or impermanent, edifice. In a subtle illusion of a reflective surface, the passage leading toward a darkened, rectangular entryway is mirrored on the floor. “Untitled,” a mixed-media work on paper depicts a squat, red-brick building fixed in a greasy, sooty, charcoal void. With no visible doors or windows, it’s a suffocating image, bringing to mind a mausoleum or crematorium.

“Untitled (Steeple)” depicts the exterior of a fortress-like structure. The impenetrable mass of white bricks recalls British artist Rachel Whiteread’s sculpture “Ghost,” a full-scale cast of the interior of an entire living space in plaster. Similarly, Putnam’s drawing suggests the presence of something not seen, just as it defies the logic of habitable space.

In the helpful cellphone audio tour of the exhibition, Putnam acknowledges that small photograph as the “keystone for the rest of the show.” The silver-gelatin self-portrait depicts the bare-chested, 6-foot-8 artist improbably folded behind the glass vitrine of a small cabinet. His face obscured by a corona of glare, Putnam takes his own picture via a cable connected to the unseen camera. A viewer can’t help but wonder how he can extricate himself without breaking the glass. It’s an uncanny image, like an anonymous traffic accident that simultaneously repels and attracts us.

In this enigmatic photograph and Putnam’s drawings, physical and psychological spaces intersect. Real or imagined architectural spaces function as allegorical sites in which the artist, or the viewer, can imagine a self. Putnam’s architectural constructions seem to be inviting habitation, provoking both desire and uncertainty.

His lanterns, however, fall short of such intriguing realms. Putnam says he first conceived of the idea for his lanterns after seeing a film by experimental filmmaker and author of Hollywood Babylon, Kenneth Anger, who utilized the device to project a fantasy scene. Belying the artist’s intention that his lanterns look “like they could fall apart any minute,” they are decidedly not fragile constructions. They are humble and rather coarsely made; illuminated via dim electric light rather than flickering candle, the lanterns are set on sturdy pedestals several feet from the gallery walls.

The lantern’s Plexiglas sides are smudged with fingerprints; the exposed interiors (is the floor really an industrial carpet remnant?) and single bare bulb reveal the inner workings — the artifice of the enterprise. The viewer might be momentarily captivated by the hazy, “magical” projections, yet may leave wondering, Is that all there is?

Ultimately, Putnam’s lanterns are unconvincing; they are a limited illustration of a concept, not an expansive engagement with one. In his works on paper and his photography, Putnam constructs fantastic realities, narrating a fiction worth believing.