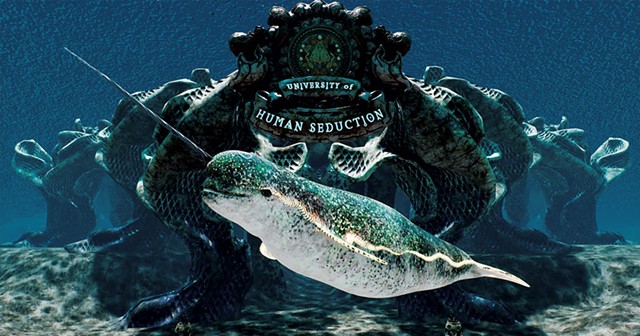 Mermaids are unlikely agents in the climate action movement. But in Liz Canner's new virtual reality video game, Lost City of Mer, they might be the key to galvanizing people to give a shit.

"As I started doing research into what moves people in games, I learned that if you make games that are about imaginary creatures, people are actually more moved to save them and take action," the Vermont-based filmmaker said, demonstrating the game at the White River Indie Festival in White River Junction two weekends ago. Lost City has traveled far and wide to other festivals and exhibitions over the past year; it will be released to the public in November.

I had been looking forward to trying the game (and losing my VR-ginity) since I read about the project. While some VR takes players to landscapes they can only imagine, Canner's game immerses users in a fantastical adaptation of her own experiences. Canner, 51, who lives in Norwich, Vt., and New York State, snorkels for fun; that's how she learned coral reefs are deteriorating as the climate crisis worsens.

Horrified by the denial of the problem in Washington, D.C., the activist and artist set out to create something that would evoke the same visceral reaction in others. Lost City allows users to swim through an underwater world ravaged by pollution and witness the impacts of human actions, both positive and negative, with Canner's own mythical, technological twist.

Before it was my turn to take Lost City for a spin, I watched two other users try it at one of two stations in the lobby of Barrette Center for the Arts, where the demo was held during WRIF. The second station had been set up to accommodate walk-ins after most of the 15-minute time slots filled up in advance.

The first player, Ivy Schweitzer of Norwich, has been diving IRL in Bonaire with her husband, Tom Luxon, for more than 10 years. She loved being able to look around in the game without the constraint of heavy diving equipment and audibly "oohed" and "aahed" throughout her trial. "I'm a little dizzy, 'cause I just really got into it," she said when she finished.

Luxon, who'd already done the demo, was equally excited about his dive. "But I would do it with my contact lenses next time," he noted, touching his glasses' frames.

Heartened by my predecessors' rave reviews, I had Canner fit me with the headset and handheld controllers as she gave me an instructional spiel. Talking slowly and holding the controllers above her head, she looked like a flight attendant explaining emergency protocol. I learned to bring the controllers down to swim up, up to swim down. Pull the trigger to pick something up, and swivel your head to look around. Reach out your hand to give the narwhal a snack.

Though I had watched the others play — through a small monitor that showed what they saw in their goggles, like a movie — no amount of 2D diving could prepare me for the sensation of the real thing. With the VR gear on, I was so transported that I bumped into the wall once or twice as I breaststroked forward.

I began to understand why Canner, who grew up on Pac-Man,* chose virtual reality as the platform for her project: The experiential technology is uniquely evocative in a way that fosters empathy for the game's world and characters.

Lost City opens in a cave, where a small seal named Athina informs the user that she is the sole survivor of Mer; the rest of the population has died from ocean acidification and rising temperatures. As users get their bearings and learn to swim around, they begin to piece together the background of this world.

They navigate through the Metamorphosis Lab, where the arrow on a large CO2 meter shows that the ocean is oversaturated with carbon dioxide; the empty University of Human Seduction, where the mermaids once practiced singing to lure humans into loving and saving the environment; and, finally, the secret coral gardens.

There, players are instructed to plant coral to revive the ecosystem (analogous to the robotic planting of coral that scientists are doing today). And voilà! The mermaids begin to return to life. At this point, the screen darkens, and users are encouraged to go to the game's website to see how they can reduce their damage to the real environment.

Lost City, which was made using the same program as the popular game Fortnite, is visually stunning, with a glow-in-the-dark color palette. The VR technology is thrilling, too; though the game is animated, the swimming movements and slooshy white noise of the ocean are surprisingly lifelike.


In an interview, Canner said she hopes the game's vividness and optimism will help users combat feelings of paralysis as they confront the climate crisis. While the dead coral in the game visually represents climate destruction, the act of replanting is meant to be empowering, even creative. In the complete version of the game (this one was tailor-made for the festival circuit), users will have even more chances to interact with the forces wreaking havoc on Earth's oceans.

"Part of the problem is, we don't feel a sense of agency because [the climate crisis] feels so huge," Canner said. "But, actually, we're a piece of the whole thing. So we do have agency."

Rutland's Pat Hunter found that aspect of the game powerful. Like Schweitzer and Luxon, she falls outside the typical gamer demographic, but she quickly picked up the movements she needed to propel her virtual self through the water and pick up coral stalks. "To make something grow and create, as opposed to watching it die off, was part of the impact," she said. "Being a creator rather than a destroyer, as the human being."

Research supports the logic behind Canner's creation. The Stanford Ocean Acidification Experience showed that a VR simulation illuminating the causal relationship between human action and environmental degradation was likely to make participants feel more ownership of the environment and encourage them to change their behavior. Participant Media's This Is Climate Change also uses VR technology to yank viewers out of denial by showing them scenes of deforestation in the Amazon and climate-caused famine in Africa.

"We know that when people are perceiving risk, two main things are important," said D.G. Webster, an associate professor of environmental science at Dartmouth College and one of Lost City's scientific advisers. "One is called availability, which basically means that it is both vivid and salient to the individual. The other is affect, which is essentially your gut response to the risk."

Through its amalgamation of the natural and supernatural, Lost City tackles both.

To bring the game even further into the real world, Canner and her developers have created an app of the same name, currently available for beta testing. It functions like a nautically themed pedometer, meant to influence users' everyday habits by highlighting how many pounds of carbon dioxide they can save by walking instead of driving. Their actions are linked to prizes they can receive in the VR version.

Although I didn't connect the app to the game to reap its virtual rewards, I did try it and found it sneakily satisfying. It was gratifying to see my step count climb in tandem with the "CO2 saved" meter. At the very least, it was a departure from my usual gloom-and-doom thoughts about the climate crisis.

The game is packed with artistic influences, from Georgia O'Keeffe and Antoni Gaudí to Claude Monet's gardens at Giverny. Canner, the daughter of two anti-nuke activists from Groton, Mass., has practiced artistic activism since her teens. For years, her chosen medium has been documentaries; her best known is Orgasm Inc. (2009), which traces the pharmaceutical industry's quest for a "female Viagra."

While Lost City is Canner's first foray into both VR and climate activism, it doesn't come out of nowhere. She's been pushing the envelope for years, looking at social issues through the lens of new technologies even in her earliest documentaries. A WearCam-based doc chronicled the lives of nine people in Arlington, Va., after the 9/11 attacks. A 2006 project for iPhone Video allowed viewers to interact with the erased history of Native Americans in Canner's hometown based on their geolocation.

Canner has been eyeing VR for a while, she said, but only recently decided the technology was up to snuff. To gamify her artistic vision, she enlisted a large team of experts, programmers, designers and interns. Among them are Gregory Bennett, the game's animator, codirector and coproducer; and 17-year-old Eli Marcoux, a competitive gamer who will help Canner market Lost City to a more serious gaming audience.

As she's devised and molded the 3D world of Mer, Canner has enjoyed coloring outside the lines. In the creative details of the game, her sense of play is palpable.

"That's the nice thing about doing something fantastical," she said, laughing. "I felt very liberated after doing documentaries for so long."

The full version of Lost City will be available for headset-owning audiences in November wherever VR games are sold. They'll be able to find a free updated version of the companion app in app stores.

Given adequate funding, Canner said, the game will have another chapter. She's not one to rest on her corals — er, laurels.

* Correction June 14, 2019: An earlier version of the story incorrectly said that Canner had no previous gaming experience. While she grew up on Pac-Man, she has also played and tested other video games and taken game design classes.

The original print version of this article was headlined "Sea Change | Trying out Lost City of Mer, a game that uses virtual reality to address the climate crisis