Fat in Franklin County? Vermonters start their own version of "The Biggest Loser" 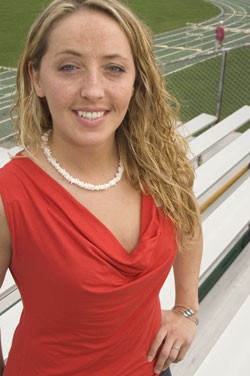 Wendy Vranjes didn’t want to know her weight. She stepped on the scale and asked that the number not be revealed to her. Vranjes doesn’t even own a scale. “I just have to get healthy again,” she said. To do that, she’ll have to become a loser. A big loser. Vranjes is among the 76 people who recently registered for a 12-week weight-loss challenge in Franklin County that borrows its name from NBC’s popular reality show, “The Biggest Loser.”

Franklin County’s Biggest Loser program is co-coordinated by Amanda Burby, 31, of St. Albans, and Earleen Bosley, 52, of Enosburg. “This is about helping people feel better physically and mentally about themselves,” said Bosley, a once-heavy school food service director who recently lost 75 pounds over a year. “I know what that means. I’ve been there.”

As with the TV series of the same name, the basic premise of Franklin County’s challenge is that overweight participants compete to win money by losing the highest percentage of their body weight. The TV show offers $250,000 to the winner. Participants in St. Albans each paid $29 to join; $25 from each fee goes in the pot. The winner takes home half the prize money — about $1500 — and second- and third-place winners, er, losers earn 30 and 20 percent of it, respectively.

But for Vranjes, 41, this isn’t about earning money. She wants to reduce her size 12 by half.

Burby and Bosley are fans of “The Biggest Loser,” despite the reaction to the show’s first season from critics who alleged reality TV had hit a disgusting and privacy-invading new low. But five seasons later, “Loser” is a blubber-busting bonanza that has sparked copycat challenges nationwide.

Yet the NBC and Franklin County versions have little in common other than their name. On the reality show, 18 contestants are secluded in a compound and faced with challenges, temptations, weigh-ins and elimination. Dieticians and doctors are on hand 24/7. No work. No kids. No stress. Other than, of course, America watching them.

“It’s almost abuse,” Bosley declared. She and Burby were each conducting smaller weight-loss programs before they brainstormed and jumped to their current big one. They held the first of their biweekly Biggest Loser meetings on April 21. Word of mouth, and a shot of publicity, produced a group of 60 people. “It was like — boom!” said Burby, a self-employed personal trainer and wellness coach. “My phone has been ringing constantly.”

Some potential participants called Burby to ask if she had a scale that met or exceeded 350 pounds. She found one that went up to 400. The total weight of the group is 16,034 pounds — about 8 tons.

“Tears were in my eyes after those calls,” Burby said. They confirmed the need for a weight-loss challenge in this corner of Vermont, which has one of the highest obesity rates in the state. She and Bosley have a theory as to why: Franklin County offers few gyms and even fewer health-food stores. But it’s teeming with unhealthy and/or high-calorie dining conveniences — pizza, Chinese, subs, greasy spoons. For two-job, too-busy families, it’s all too easy to head for the Golden Arches. “I’ve been guilty of it,” Vranjes admits.

A stay-at-home mom with three daughters ages 3 to 16, Vranjes is not exactly a candidate for gastric bypass surgery. Actually, she looks great. But tell her that, and she blushes. After the birth of her first child, Vranjes dropped 35 post-pregnancy pounds, and her weight dropped to 115. On the cusp of age 30, she wore a size 2. That’s teeny. In fact, Vranjes admitted she was too small and felt unhealthy. After delivering her second child, she kept the pregnancy-induced padding, and has added to it over the past six to eight years. “Now,” she said, “I want to lose the baby weight.”

Typically, Vranjes’ family eats seafood, steak, pasta and sometimes pizza. Her contractor husband, Keith, downs a bowl of ice cream almost nightly, she said. Her own vices are Mountain Dew, dark chocolate and wine cut with Diet 7-Up, which makes her feel like she’s consuming less alcohol and fewer calories. “At least that’s what I tell myself,” she joked.

For the next 12 weeks — and beyond — Vranjes will switch to whole-wheat pasta and ground turkey. Steak will be a treat. Chocolate cake was her former fave indulgence. Now, it’s Diet Mountain Dew.

Vranjes’ prescribed plan includes supplementary shakes and vitamins, salad and lots of lean meat. She’ll incorporate 30 to 60 minutes of exercise five days a week into her regimen — but working out is voluntary for all participants.

“This is not a workout class,” Burby clarified. “We’ll teach them about different things they can do, but not require it. When some [potential participants] called, one of the first questions they asked was, ‘Do I have to exercise?’ It was hard enough for some of them to sign up. We can’t push exercise.”

Vranjes noted that some people cringed when Burby mentioned the initial weigh-in at the first meeting, but they were even more nervous about the “before” and “after” photos. “They were more afraid of having their picture taken than stepping on the scale,” she said.

Burby and Bosley were reticent to provide the week-by-week details and plans for each individual, because they vary greatly depending on weight, age and gender. However, each 45-minute session will include lessons on lifestyle changes, nutrition and exercise. There will be much ado about fruits, vegetables, lean meats and protein.

“We want each week to be a surprise for everyone,” Burby said. “We want everyone to keep coming back, so we don’t want anyone to know ahead of time what to expect. We’re keeping some secrets.”

Participant Mark Pfenning, 45, of Highgate Center joined Biggest Loser because he wants to shed 20 to 25 pounds. The sales engineer said he “felt outnumbered” by women during the first meeting. People looked at him and wondered, “What are you doing here?” he believed.

As with Vranjes, Pfenning’s health is not at risk because of his size. He walks, bikes, hikes, plays golf and coaches ice hockey. But he was shocked when his daughter informed him, while she was surfing the Web one night, that, at his height and weight — 245 pounds at 6-foot-2 — he’s considered obese. Medical science puts his ideal weight at 180 to 200 pounds.

“That’s way below where I want to be,” Pfenning said. “For me, this challenge is more about changing my eating habits and getting back to my old activity level. I’ve let it slip.”

That means eating more fruits and vegetables and fewer carbohydrates. Pfenning’s first priority? Make time for himself. “You have to be selfish,” he said, opining on successful weight loss. “You have to put yourself first. I haven’t done that for the past five years. You can talk about it, but that’s not going to get the job done.”

Pfenning applauds everyone who signed on to Franklin County’s Biggest Loser. “Anybody who’s willing to go to a class like that? It shows a lot about their determination,” he said.

According to Vranjes, Biggest Loser coordinators Burby and Bosley have the right chemistry to generate weight-loss success. Burby has the knowledge; Bosley has the story — and she cries when she tells it.

Eighteen months ago, Bosley weighed 245 pounds. On October 11, 2006, she saw an acquaintance who had lost 50 pounds. She also realized that playing on the floor with her grandchildren was a challenge. So — trite as it sounds — Bosley changed her life. She sought a wellness coach, changed her diet, took nutritional supplements, drank more water, and lost about 30 percent of her total body weight. She didn’t exercise at first, but she does now.

“I had to go one step at a time,” Bosley said. “It was a struggle to lose weight. It’s like being an alcoholic. Once I started eating things, I couldn’t stop.”

Bosley grew up on an Enosburg dairy farm, where meat, potatoes and gravy were nightly staples. Hot dogs and French fries were Saturday night treats.

Burby studiously avoided the fat trap. Growing up in Bellows Falls, she saw rampant obesity in her family. “I remember being little and watching people be so unhealthy,” she recalled. “I just knew . . . that I was not going to be like that. For me, it was knowing the lifestyle that I didn’t want to live and knowing the lifestyle that I wanted to live.”

She immersed herself in sports and was a standout basketball and softball player at Bellows Falls Union High School. She earned a Bachelor’s degree in health science and corporate fitness in 1999, and discovered bodybuilding. Burby has entered four competitions in five years, overcoming stage fright to do so.

At one point, she bulked up to compete as a heavyweight. Biggest Loser participants might wonder, “Why would anyone want to gain weight?”

“I needed to, to reach my goal,” Burby explained. “To me, it was realistic.”

Realistic goals are key in Franklin County’s Biggest Loser. If someone wants to lose 100 pounds, but Burby and Bosley judge that to be unhealthy or unfeasible, they’ll encourage a smaller number.

Another important facet to the program, of course, is keeping the weight off. Burby and Bosley will recommend that everyone stick with their coaches when the 12 weeks are over, but ultimately, maintaining the goal is up to each individual.

“You’ve got to be emotionally set to do this,” Bosley said. “I can coach you and help you. But I can’t do it for you.”

The Burlington YMCA and Kool 105 are looking for participants in their own version of “Biggest Loser,” the Road to Fitness Challenge. Stop by the Y’s new Winooski facility on Malletts Bay Avenue for a 3-minute assessment. Deadline: May 2.

* For the third consecutive year, Mississippi topped the fattest-state list with 30.6 percent of adults weighing in as obese. Ten of the 15 states with the highest rates of adult obesity are in the South.

* National obesity rates have more than doubled in the past two decades.

* 18.4 percent of Vermont adults reported in 2007 that they did not engage in physical activity. The national average was 22 percent.

* From 2001 to 2003, Franklin, Addison and Rutland counties posted the highest rates of adult obesity, at 21 percent. Essex and Windham counties had the lowest, at 14 percent. Chittenden County recorded 16 percent.

* Governor Jim Douglas' 2010 goal for Vermont is to reduce the percentage of obese adults over age 20 from 20 percent to 15 percent.

* Vermonters who are less educated and/or make less money are more likely to be either overweight or obese.