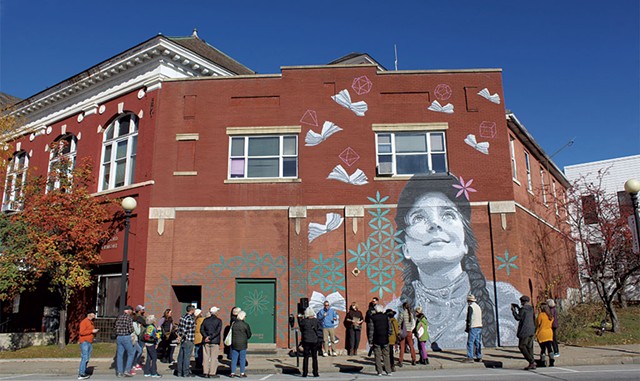 "If people can see art on their way to the grocery store or work, it adds a deeper dimension to living," said Rutland artist Lopi LaRoe. "Public art impacts people's daily life in a really positive way." Those who live, work and shop in Rutland now have a new daily dose of art in their lives.

On Saturday, a small but cheerful crowd gathered for the official unveiling of Rutland's latest public art installation, LaRoe's "Beginner's Mind." The mural is located in a can't-miss spot on the exterior of city hall at 1 Strongs Avenue, across from Rutland Plaza.

Rutland Mayor David Allaire said at the unveiling that, although he was unsure about the prominent location when first asked for permission, he was very glad he'd agreed.

"Since the community has had a chance to look at it, I've heard nothing but positive reactions," Allaire said.

LaRoe, also known as LMNOPI, has painted more than 20 murals, from New York City to California, and several in Vermont, where she has lived since 2018. She began painting murals and other street art to rebel against elitist gallery spaces. "It's a way to reclaim the commons for the people," LaRoe told Seven Days.

"Beginner's Mind" features a simple but stunning image of a young girl looking skyward toward numerous flying books and geometric shapes. "This mural is designed to uplift," LaRoe explained. "It has the message of 'Read more books' and 'Geometry is cool,' but it is also just an infusion of hope into the community."

LaRoe enjoys asking others what they think her art represents. "Someone told me it made them feel like it was freeing their inner child," she recalled. "I was, like, 'Wow that's beautiful. Mission accomplished.'"

Edie Place, 9, of Proctor is the subject of the mural and the daughter of one of LaRoe's friends. "When I paint people that I love, I feel the emotions of that come through really strongly," LaRoe said. "I think that people feel that when they see the portrait. They feel the love."

LaRoe chose this design because she was looking for something that everyone could enjoy. There's no inherently political message. The flying books don't have titles, which LaRoe said was intentional. "People have been arguing way too much," she noted. "Right now, we need something unifying."

The Chaffee Art Center partnered with LaRoe to locate the mural in Rutland. "It's wonderful for us to be able to be a part of projects like this that are bringing art to the public," Chaffee executive director Sherri Birkheimer Rooker said. "It's accessible to everyone, all the time."

"Beginner's Mind" also aligns with work the Chaffee does with youth in the community. Art can provide respite for kids who are having a hard time, Birkheimer Rooker said. "You can escape into art. With Lopi's mural, you escape right into it."

The mural was sponsored by the Vermont Department of Housing and Community Development's Better Places grant program. Born during the pandemic, the program provides coaching, local fundraising support and matching grants to communities that crowdfund projects aimed at revitalizing their downtowns and village centers.

The program's goal is to "foster social connection, economic opportunities and bring energy, excitement and enthusiasm to our main street after a couple years of disruption from the pandemic," the department's planning and outreach manager, Richard Amore, said. There's no better marketing or tourism draw than investing in vibrant places, he said: "Artists can be a key to revitalizing main streets. They can be the first ones to revitalize and bring that resurgency and resilience."

After the unveiling, the crowd lingered to enjoy the warm, sunny day and gaze at the mural. Daylin, 7, and Grady, 10, of Rutland came to the event with their parents. Both kids said they love drawing, and Grady said LaRoe had inspired him to become an artist one day.