Thunder Road's Dylan Smith is on a Fast Track to NASCAR 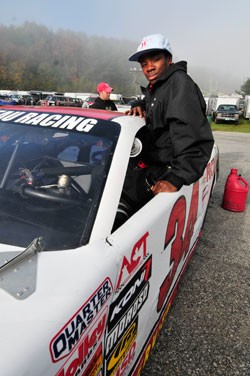 Racecar driver Dylan Smith is screaming around “Turn Two” at Thunder Road Speedbowl in Barre when his rear end skids, sending him into a wild tailspin.

While the pack of cars behind him swerves to avoid a pile-up, Smith careens into the center of the oval. Then he manages to straighten out his late-model Pontiac and zooms back onto the straightaway. If he fails to qualify for the next day’s Milk Bowl race, it sure won’t be for lack of trying.

Like other drivers at the central Vermont speedway, Smith’s a monster behind the wheel. He flies at 80 mph down the quarter-mile loop, employing nail-biter maneuvers to squeeze past competitors.

Off the track, though, Smith is a mild-mannered senior at Randolph Union High School. At just 17 years old, he’s on the young side for stock-car racing. More notable, though, is the fact that Smith, who was born to a Haitian mother, is one of only two black drivers at Thunder Road. In a sport dominated by rural white folk, in one of the country’s least diverse states, Smith stands out.

But unlike some NASCAR drivers who downplay their race — like Bill Lester, the first black driver to compete in a Busch Series race — Smith wears his skin color loud and proud. He even adopted the number “34” in tribute to Wendell Scott, the racing legend known as NASCAR’s “first black driver.”

“I want to be known for being black and being a racer and showing that there is a way you can make it,” a poised Smith says during a break last weekend at Thunder Road.

“Like Tiger Woods,” he adds. “Tiger Woods is a black guy in a predominantly white sport, and he’s the best out there. I’m making my drive toward that. I want to be the best and I’ll do whatever I can to make it.”

This should help: Smith recently learned he’s in the running for a slot in NASCAR’s Drive for Diversity Driver Development Program, designed to attract more women and minorities to one of America’s whitest and most male-dominated sports. Smith was one of 29 selected from approximately 200 applicants to participate in the testing and evaluation program in North Carolina and Virginia. For four days in October, he’ll be bumper-to-bumper with other young drivers who don’t look anything like Richard Petty.

From that group, 10 will be selected to compete in a 2010 NASCAR racing series.

“A lot of people don’t understand racing,” Smith says. “They think it’s a bunch of rednecks driving around in circles. You can say that from afar, but you have to get to the track and see the cars and hear the engines. It’s a rush.”

Smith might be young, but he’s already spent more time behind the wheel than some drivers twice his age. He was 4 when he started racing go-karts at Thunder Road.

“His lap times were within hundredths of a second of each other — he was that consistent,” says his adoptive father, Ken Smith of Randolph.

Smith competed for 11 seasons with the Northeastern Kart Company, winning multiple championships. When he was 12, he won two of three races in the youth division at Riverside Speedway in Groveton, N.H., lapping the field in every race. He raced a three-quarter-size car in the Allison Legacy series to a first-place championship in the north division.

He debuted this season at Thunder Road in the #34 Pontiac owned by driver Pete Fecteau of Morrisville.

Today, Smith drives his snarling late model into the speedbowl for a long-shot run at qualifying for the 2009 Vermont Milk Bowl, Thunder Road’s culminating event.

Heat one sees him advance from 16th place to finish 12th, picking up four places. Heat two looks even more promising, but after a few laps, it more resembles a demolition derby.

One car careens over the edge of the bowl, slamming into a Jersey barrier. Another peels out from “Turn Three,” kicking up a plume of dirt.

Smith spins out twice, but avoids the worst wrecks and pile-ups, whizzing past crushed cars to a respectable, but nonqualifying, 20th-place finish.

“Boy, his tenacity is terrific,” says Ken Squier, co-owner of Thunder Road. “He gives it everything he’s got.”

Squier has seen a lot of young, skilled drivers come through Thunder Road, and says it’s too early to tell if Smith will be great or just good. But he notes that Smith leapfrogged two lower racing classes to land a spot in the elite American-Canadian Tour late-model championship class, an unusual feat for a driver his age.

When Ken Smith talks about his son’s talent, it’s clear he believes the boy is destined for greatness. The proud dad and his wife, Nancy, had spent all their savings on unsuccessful fertility treatments when members of their church connected them with an expectant Haitian immigrant who was seeking parents for her baby boy.

The Smiths adopted Dylan on the day of his birth. Ken calls his son a “little miracle baby.”

Or maybe to NASCAR. When Smith graduates in nine months, he plans to pursue a full-time career in racing. School is “not my strong suit,” Smith concedes, so college is not in the plans for now. Getting picked for the Drive for Diversity program would give him a huge head start in pursuit of his greater goal: racing on the biggest stage in the world.

“I hate to lose,” he says. “We haven’t gotten the finishes I was hoping for, but we got a 12th spot the other week, after starting from about 25th. We’re working our way up.”

The journey hasn’t been easy — or cheap. Smith’s parents have invested significant time and money into their son’s passion.

Racing this year cost Smith upwards of $20,000 when you include the car, entry fees, tires, fuel and pit passes. Sponsorships covered about $3000 of that, but the rest came from Smith’s parents, who work multiple jobs to support his racing. Ken works days selling used cars and paints houses on the side. Nancy works three jobs: at the post office, cleaning carpets and caring for an elderly woman.

“It’s been a huge family commitment,” the elder Smith says in a short pit-stop interview. “Hopefully it takes him where he wants to go. The last thing I want is him sitting in a recliner when he’s 65 saying, ‘I wish I’d tried this.’ He’s going out and taking a risk.”

The original print version of this article was headlined "Loop Dreams"