Looking for a Hero: A Champlain Islands Institution Is for Sale

Dan Williams could not find a gravy separator.

He'd searched all over Hero's Welcome, one of the wackiest general stores in Vermont, on a recent Sunday morning before he went straight to the guy in charge. Bob Camp can locate every eccentric item, from live bait to prank hand buzzers, in the North Hero emporium he and his wife, Beverley, created in 1993.

This time, though, he came up empty-handed. "I hate saying no," he confessed.

Even harder: saying "no more." After decades in the biz, the Camps and their partners, Carlene and Paul Letourneau, are selling the Route 2 institution. Over the years, it's become a tourist destination and a local meeting place at the north end of the Champlain Islands, serving up sandwiches, sundries and kitsch every day of the year — except Christmas.

"The store is crazy. It's sort of my personality, leaking out all over the place," Camp said with a laugh. He carries practical items but also buys from some 800 vendors who sell things customers can't find anywhere else: dish towels emblazoned with sayings such as "Remember ... we are a nice & normal family"; socks that warn, "I'm cute — but a psycho"; and a breath spray that'll make you "look and feel Canadian instantly."

"I love retailing," said Camp, who noted that the decision to put his singular store up for sale was a hard one. "But I agree with those — principally, my wife — who say, 'You're 74, Bob. You're not going to live forever' ... So it's best, probably, to find great owners and step aside and help them if they need help."

The white clapboard building that houses Hero's Welcome is part of a three-acre parcel that straddles the road along the east shore of the island. Two old-fashioned analog pumps dispense gas out front while patrons rest on benches — one painted red for Republicans, one blue for Democrats. Camp doesn't shy away from potentially divisive products; he embraces them with good humor. 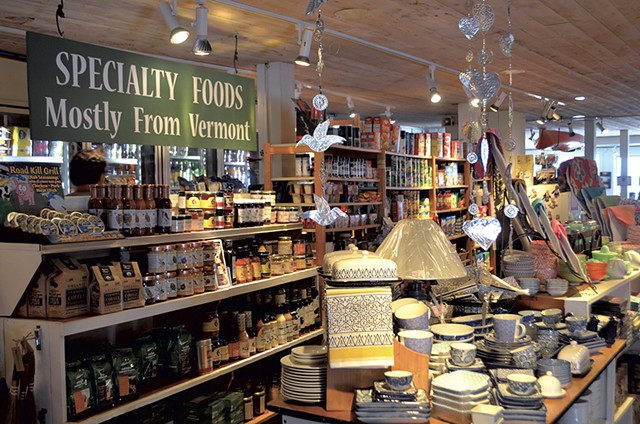 "We keep it loose and change it up," Camp said of his guiding philosophy. "Generally, I think people love the experience. When they bring their friends back and sort of start showing them around, pointing out the landmarks of the store — that's a real compliment to me."

Camp rents space to the U.S. Post Office, which operates out of an annex attached to the store. The Lake Champlain Islander newspaper occupies an office on the second floor.

Across Route 7 is the 160-foot dock, complete with boat moorings, a gas pump and a picnic area that affords stunning views of Knight Island and Lake Champlain's City Bay.

Camp hopes to get somewhere "in the modest seven figures" for his island empire. But this transaction is about more than money.

"It seems to us that the buyers are not going to be solely looking for a financial return," Camp said. "Of course, they'll want to make a profitable investment. But we think it's something deeper than that, too."

Hero's Welcome has been a general store since around 1900, when John Tudhope built it. He ran the business for decades until his nephew, Ira, took over. Ira and son Doug eventually shifted from sundries to watercraft and renamed the place Tudhope Marine in the 1950s, according to Doug Tudhope, now 90. He sold the operation in 1988.

Two subsequent owners had trouble keeping it afloat; the second went bankrupt and lost the business. The place had been vacant for a couple of years, its windows boarded up, when it caught Camp's eye one day in 1993.

At the time, Camp was between jobs. The Seattle native had gone into retail right out of college and made a name for himself in the late 1960s, when he took a job managing a Pier 1 Imports in Dallas, Texas. His store performed so well that Camp earned praise — and many bonuses — from corporate. At one point, he even served as Pier 1's CEO.

While in Texas, he hired Frank Bouchett — now owner of Homeport on Burlington's Church Street — and "we became friends instantly," recalled Camp. The two decided to go into business together and saw Canada as fertile ground. They moved to Montréal and opened Import Bazaar, a venture similar to Pier 1. The company succeeded, but Camp went back to Dallas, and Bouchett wound up in downtown Burlington.

Through it all, the Camps maintained a vacation home on Grand Isle. Over time, the couple decided they wanted to live in Vermont permanently.

"We made a big decision and said, 'What can we do?'" Camp said. The North Hero compound looked like an opportunity. "So we cut a deal with the bank, we bought it out of bankruptcy, and the following Christmas we opened," Camp explained.

"We had the first espresso machine in the islands, and we were offering free espresso on our opening day. These Vermonters were coming in and looking at it and saying, 'What the hell? Where's my coffee?'" Camp recalled with a laugh. "We got what I call the 'widow's handshake,' where they come shake your hand, but they're really saying goodbye because they know you're gonna fail!"

Camp used his past retail experience and good judgment to assemble a loyal team of employees, beginning with Carlene Letorneau, whom he hired as the store's manager a year after opening.

"I walked in, no résumé, no nothing," said Letorneau, a native of the islands. "Bob was sitting in the office upstairs and talked to me for about an hour and said, 'If you want the job, it's yours.'"

Camp calls Letorneau "the hardest-working human being I've ever met." During a recent busy day at the store, she buzzed around, delegating duties to staff while she ran the deli counter. Some days, she said, she and her staff will make 400 sandwiches with names such as the Bernie, tagline "Feel the Bun," or the Benedict Arnold: "When it's Time to Switch!"

Five years after she started, her husband, Paul, came aboard, helping with the outdoor gear rentals and doing maintenance. Camp asked the couple to become partners, and they bought in. The Letorneaus are now 20 percent owners.

The team "really made it a destination store — and they still do a big deli business," said Tudhope, who still lives in North Hero. 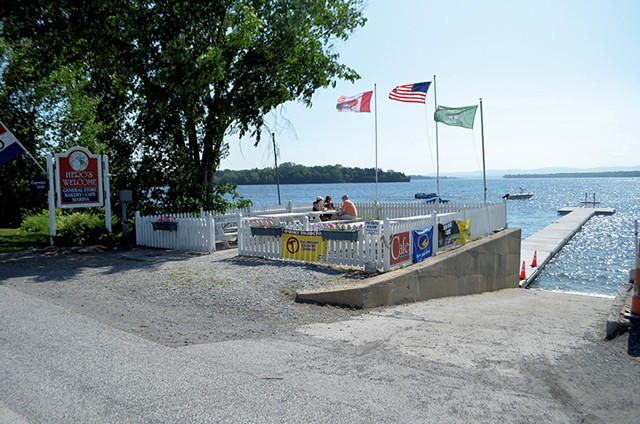 Business has been good, Camp said, especially in warmer months. About 75 percent of sales happen from May through October, when patrons arrive by bicycle, motorcycle, seaplane, kayak, sailboat, foot and RV. Camp estimates the cash register rings 2,000 times a day on a July Saturday, when the place hums with a staff of about a dozen.

Bouchett said stores like his and Camp's succeed because they sell "fun." Hero's Welcome stocks "stool softener" — actually a small wooden mallet — and a rooster-topped alarm clock that bills itself as "possibly the world's most annoying."

"We can't draw them with the price of a widget, because Amazon is going to beat us every time," said Bouchett, who calls Camp a "great intuitive merchant." Instead, they sell an experience enhanced by clever inventory, good music and top-notch personal service.

"I think we were the first in the nation in saying we're in the entertainment business, we're not in the merchandising business," Bouchett said. "And that was in 1975 we started thinking about that — way before the internet came along!"

Town zoning administrator Bob Ayers stops in almost daily to pick up the mail and grab a coffee on his way to the office. He also meets there with people who have zoning queries.

Appropriately, Camp put up a small sign by the deli counter last fall announcing that Hero's Welcome was for sale. In recent months, he and his partners have gotten more serious about marketing the place and finding the right buyers.

"It can be a scary time for a community," said Paul Bruhn, who keeps an eye on statewide general-store sales as executive director of the Preservation Trust of Vermont. "But I hope that Bob and Beverley will be able to find some folks that are as enthusiastic and as passionate as they are about running a great business."

In the meantime, the summer season is upon them. On a gorgeous morning last week, Pierre Lafleur was at the deli counter. It wasn't quite noon, yet Lafleur — down from Montréal visiting his in-laws in North Hero — had already been to Hero's Welcome twice before that day.

"There's always something," said Lafleur, a customer since 1994. "I get coffee; we get lunch; my wife bought some things today...

"It's a good place," he concluded — one the owners hope will sell itself.