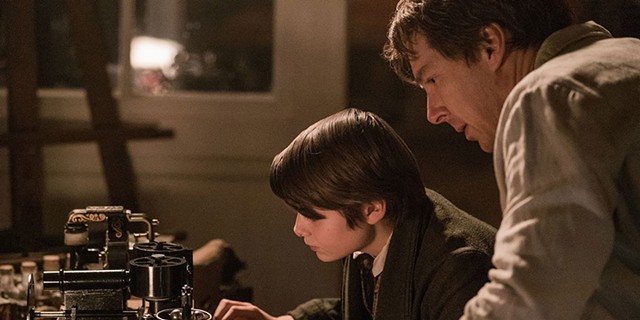 Failed Oscar bait is a genre unto itself — just ask the hosts of the podcast This Had Oscar Buzz. The Current War could be the quintessential example of a movie engineered for glories it probably won't obtain.

Helmed by a Sundance Film Festival darling (Alfonso Gomez-Rejon of Me and Earl and the Dying Girl), this triple biopic stars four actors who've appeared prominently in both prestige fare and superhero films. It was slated for 2017 award-season release by the Weinstein Company until the revelations surrounding Harvey Weinstein led to its ignominious shelving.

Now, at last, this chronicle of the battle to control the initial electrification of America reaches theaters — in Gomez-Rejon's preferred cut. While it may not light up audiences, The Current War is more fun than most films of its class, largely because of the chasm between its reach and its grasp. With every scene, the director seems to shoot for the relatability, artistic daring and historical gravitas that Steven Spielberg combined in Lincoln, yet the result is more like Bohemian Rhapsody without the music.

With his restless cross-cutting and constantly moving camera, Gomez-Rejon appears eager to give us a demystifying, boots-on-the-ground view of famous figures such as Thomas Edison (Benedict Cumberbatch). Yet almost every line of Michael Mitnick's screenplay is a sound bite unlikely ever to have been uttered by a human. Of Edison, we're told, "He engineers his own reality."

Cold and arrogant, the champion of direct current spends the whole movie grandstanding; the aggressively stylized script and direction give Cumberbatch no space to build a character. Tantalizing hints of doubt and moral ambiguity flit by, barely explored.

Playing Edison's alternating-current-promoting nemesis, industrialist George Westinghouse, Michael Shannon fares better. Perhaps because he's not a genius, Westinghouse gets moments of vulnerability and believable connection to others. To the film's credit, it gives both men laudable qualities, and it manages to convey worthwhile information — in particular, about how the prospect of execution by electrocution became a pawn in their rivalry.

Yet the whole production is so hyped up with Dutch angles, fish-eye lenses and musical crescendos that one keeps expecting the principals to burst into song. That's especially true of the film's third main subject, Nikola Tesla (Nicholas Hoult). The revered futurist doesn't do much in the story, but the movie nudges us to be awed by him even as Hoult's fake accent gives off Borat vibes. ("I will leave your slanted room," he snarls at a hotel owner.) The Current War reaches its wink-at-the-audience nadir when a disgruntled investor tells Tesla his name will never appear on anything again.

I prefer biopics that teach us something new rather than making us feel smug about what we already know. (Yes, "Bohemian Rhapsody" was a hit. Yes, Tesla is a car.) The Current War makes a fitful, valiant effort to get beyond middle school history and broach the murk of controversy. But its style, while undeniably entertaining, gets in the way of its substance, and it shies away from aspects of the story that might offend modern sensibilities. (Edison and his allies' penchant for zapping animals to demonstrate the dangers of AC gets very short shrift here.)

The Current War fails to overcome the core logistical challenge of dramatizing a "war" between two parties who hardly ever meet face-to-face. Yet it earns a special place in the annals of failed Oscar bait by dint of sheer chutzpah. And who knows? Worse films than this one have lit up an awards race.

The original print version of this article was headlined "The Current War: Director's Cut"