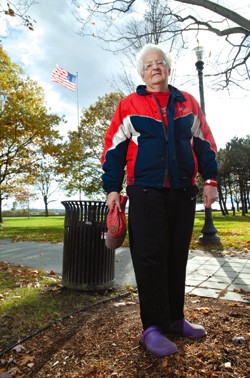 According to Old North End resident Lois Farnham, Battery Park has the finest vista in Burlington. On sunny autumn afternoons, it’s hard to disagree with that superlative. With neatly cut grass underfoot and red-and-gold foliage overhead, the park offers one stunning view of Lake Champlain.

But on Halloween morning, gale-force winds and a steady drizzle made it hard to see anything as I strolled through the park with Farnham. We passed the 34-foot-tall statue of the Abenaki Chief Greylock, then other memorials commemorating workers and the victims of 9/11. When we made it to the westernmost point of the five-acre green space, Farnham gestured down to a plaque that explains how American gunners used the embankment to repel British ships in the War of 1812.

“A lot of people don’t know that much about the park’s history, or even what the battery is,” Farnham said. She added, “I think Burlington does a great job keeping parks maintained.”

But the city doesn’t deserve all the credit for Battery Park’s pristine condition, and Farnham wasn’t just giving me a tour. Blustery weather or not, she walks through the park several times each day. Wearing gardening gloves and hauling a white bucket, Farnham collects any litter she finds. Last Thursday, she was sporting a windbreaker and a Red Sox sweater to celebrate the team’s successful World Series bid.

Farnham doesn’t call attention to her labors. Of the 10 passersby I later interviewed for this story, only half were aware of their park’s unofficial guardian. While Deryk Roach, the city’s superintendent of park operations and maintenance, expressed his appreciation when he learned of Farnham’s work, neither he nor some of his staff had previously known about her cleanup efforts.

Farnham may slip under the radar because her walks are short — in the rain, ours lasted no longer than 15 minutes. But ONE residents who do know her said they’re grateful for her service. Myra Timmins, who lives on Front Street and walks her Yorkie-Maltese through the park every day, said she routinely spots Farnham with her ever-present bucket. While taking their niece through the park, Intervale Avenue residents Rose and Michael Jerome mentioned that they’ve even seen Farnham dispose of syringes.

So what gets her out there every day? Until she retired from her career as a school nurse in 2007, Farnham lived with Holly Puterbaugh in the suburbs. When the couple moved into a duplex on the corner of Park and Sherman streets, Farnham said, she (often with Puterbaugh) began picking up trash as a way to keep serving the community.

In the warmer months, Farnham also began collecting bottles and cans from Beansie’s Bus, which parks beside the playground near the police station (and serves what she calls “the best French fries”). After redeeming the recyclables, she donated the proceeds to the Joint Urban Ministry Project (JUMP), an emergency-assistance service based in the First Congregational Church on South Winooski Avenue.

“I put a container out [by Beansie’s], and it’s just snowballed,” Farnham said of the enterprise. She estimates that she now donates $500 each year, requesting that JUMP use her contribution to defray the costs of recipients’ utilities. “Some people donate clothing; some donate food. I just thought they should be able to heat their homes in winter.”

Farnham grew up in the Northeast Kingdom town of Jay. She pointed to the number of veterans in her extended family as a reason for her special affinity for Battery Park, which once housed more than 1000 troops and still has cannons to show for it. Farnham speculates that when her father died from a heart attack in 1971, it was due in part to the stress he underwent while serving in the Korean War.

While Farnham never donned fatigues herself, she’s a veteran of a different fight. In 1997, she and Puterbaugh — who taught math at the University of Vermont — were one of three couples who initiated a lawsuit against the state that eventually led the Vermont Supreme Court to allow same-sex civil unions.

The battle didn’t end there. Not until a decade later were Farnham and Puterbaugh able to legally wed, and the federal government did not recognize their marriage until this past summer. When Farnham now discusses the ongoing campaign for marriage equality, she sounds a bittersweet note. Revealing a little attitude, she noted that only 14 states have provided same-sex-marriage rights. But she also expressed confidence in a younger generation of activists.

As we finished our walk around the park, attitude again came through when a car looked like it might run the red light and turn left onto Sherman Street. Farnham addressed the errant driver: “Oh, come on, you got a red light, what do you think you’re doing?”

So strong is Farnham’s footprint on the park that now, she says, her grandkids ask why other visitors haven’t obtained her permission to use it. But, according to one newly arrived Sherman Street resident, neither Farnham nor Puterbaugh has a territorial bone in her body.

Desiree De Luca-Johnson moved around the corner with her two daughters three months ago. She recalled Farnham and Puterbaugh stopping by to welcome her to the neighborhood and offer to look after her kids if she ever needed help. “And I just thought that was so nice,” De Luca-Johnson said. “They’re really sweet without being invasive, which is a hard combination.”

The original print version of this article was headlined "Park Protector"