Locked In: Contract Guarantees Inmates Get Sent Out of Vermont 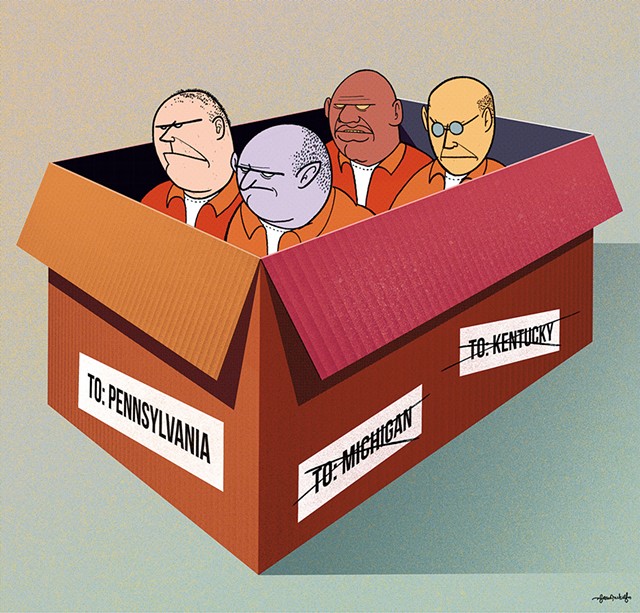 Vermont's long-standing goal to reduce its reliance on out-of-state prisons has never seemed more attainable. From 2014 to present, the number of inmates the state Department of Corrections houses outside Vermont has dropped from more than 500 to 270.

But a contract the DOC signed with its Pennsylvania counterpart last month has made that goal all but unreachable. Why? For the first time, Vermont is guaranteeing it will send a minimum number of inmates to an out-of-state prison.

Under the terms of the three-year, $21 million contract, Vermont taxpayers will be on the hook for 250 beds in Pennsylvania — even if the prison population falls and the state doesn't need all of them.

It's likely the DOC would send inmates to Pennsylvania even if Vermont facilities had room for them, critics say.

Next month, Vermont's two-year, $30 million deal to house inmates at a Baldwin, Mich., prison owned by the multinational firm the GEO Group expires. The contract includes options for extensions that the DOC was willing to pursue. But earlier this year, GEO declined, according to Vermont Commissioner of Corrections Lisa Menard. New demand for its cells could explain why.

The DOC suddenly found itself in a seller's market, according to Menard, and it had to strike a deal quickly. Vermont's relatively small number of prisoners makes it a bit player in the market, she added.

The DOC received eight bids, Menard said, but each required a minimum number of inmates. Pennsylvania's bid was lowest.

Vermont will pay that state $72 per inmate per day — up from $61.80 under the contract with GEO. The deal can be canceled with six months' notice, though neither the DOC nor its critics expect that it will be.

"We didn't have 270 beds in state to put these people [in]," Sears said. "We've made tremendous strides reducing the [inmate population], but we're not there yet."

During his run for statewide office last year, Vermont Attorney General T.J. Donovan pledged in many campaign speeches that he would fight to end the use of out-of-state prisons.

"Without the governmental and community oversight that exists in Vermont's prison system, we have less ability to ensure incarcerated persons are treated fairly and have access to meaningful programs that will fulfill our goal of successful rehabilitation and reintegration," Donovan wrote in an April 2016 op-ed.

These days, the AG says the Pennsylvania deal is the best Vermont could do, given GEO's late notice that it would not renew its contract with Vermont.

"Is this the perfect solution? No," Donovan said, adding that he remains committed to bringing Vermont's inmates home.

Critics say it would be easy enough to reduce the prison population and free up bed space in Vermont — if politicians had the will to do so.

About 150 inmates are being held past their release date because the DOC does not approve of their proposed living arrangements or they have no place to go. Another 350 awaiting trial are eligible for bail but can't come up with the money.

Other inmates are addicted to drugs or are mentally ill and would be better served in treatment than in prison, those same critics say. In March, Seven Days documented the story of a 91-year-old man with no criminal record who was jailed for months because he got kicked out of his retirement home after a fight and authorities couldn't find a place for him.

Last year, Valerio counted 275 inmates who were scheduled for release within six months, had finished all of their required counseling and programming, and were simply doing "dead time." Those people, he suggested, could be released early.

"It might be one of the easiest things you could possibly do," Valerio said. "But it's a matter of politics. When people who govern let people out of jail, there is a public backlash from law enforcement and victims' advocates groups and the like. It's not a politically palatable situation."

Menard said the DOC plans to eventually keep all inmates in Vermont. But for now, she said, there are a few benefits to moving Vermont's inmates to Pennsylvania, where they are slated to be held either in a prison outside of Harrisburg or one an hour north of Philadelphia.

By car, those facilities are about 10 hours closer to Vermont than the Michigan prison, which should make it easier for families and friends to visit. Menard said that visiting hours are more flexible in Pennsylvania than in Michigan.

And by leaving GEO, the DOC is — for the first time in a decade — not relying on a for-profit prison corporation. Those companies are often accused of slashing budgets for guards, recreation and medical care to boost their profit margins.

"I can't wait to see my family, and I hope that they will be able to visit often," he said.

But he and his fellow prisoners are frustrated at what they see as capricious decisions on the part of the state.

"I am upset over the move because I feel like I am just merchandise at this point," MacEwan wrote in an email to Seven Days. The 31-year-old inmate is serving 20 years to life on a second-degree murder conviction. "They just want to dump a bunch of angry Vermonters with no property onto [Pennsylvania's] lap and say, 'You deal with it.' This isn't right by any standards. It is all business and political instead of rehabilitative."

Other inmates who also communicated via email wrote that they are tired of being moved from place to place. Many of those heading to Pennsylvania were held in private prisons in Kentucky and Arizona before they were flown to Michigan in 2015.

"As a man who is trying to find his way into some type of redemption, it's really just another move that uproots and changes, on the whim of whomever may be pulling the strings," said Eric Marallo, who added that he has been sent to nine states while serving a 20-year minimum sentence for second-degree murder.

"I understand why I'm in prison, and I'm very consciously aware of the debt I owe to our society," Marallo added. "[But] every time they do this, it robs us of any identity and stunts any positive [progress] that a man has worked for in here. Our system breeds desperation and despair."

Inmates and their advocates say they are also unhappy that any grievances they file, or any disciplinary investigations initiated against them, will be handled by Pennsylvania authorities — not the Vermont DOC, which had more control in Michigan. (Vermont inmates can still file legal appeals in state courts and will still be represented by the Vermont Prisoners' Rights Office.)

They fear that Pennsylvania authorities will be more eager to initiate disciplinary proceedings, which can make it more difficult for inmates to win early release.

"They have a financial incentive," Wizowaty said. "It's in Pennsylvania's interest to keep them there."

Menard dismissed that concern and said she has faith in her Pennsylvania counterparts.

"I have no reason to believe that would be true or accurate," Menard said. "To my knowledge, this is not a department that is punitive."

Inmates also gripe about their limited property and what they might not be able to take to Pennsylvania. Inmates said they are being told that certain computer tablets and reading lamps that they have in Michigan are not allowed in Pennsylvania. They will have to buy different models once they are transferred.

Their complaints may seem trivial, Wizowaty said. But when one's life is confined to a cell, a few possessions and the daily routine take on an outsize importance.

"I realize many members of the public would say, 'So what?'" Wizowaty said. "But it is an affront to our personal dignity to say, 'So what?' to another human being."