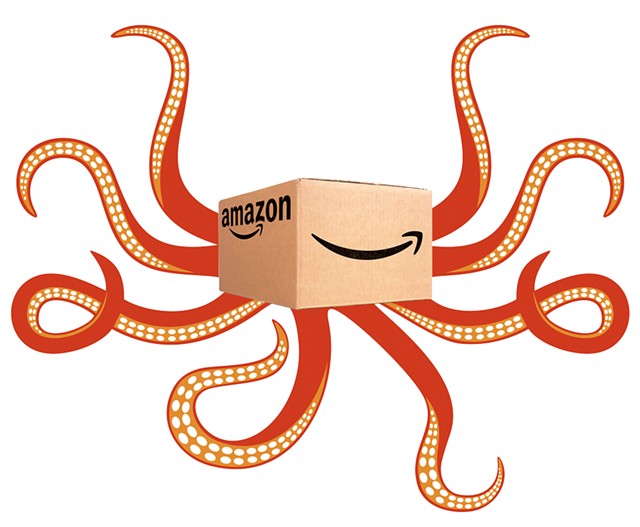 On Monday evening, dozens of people filed into Burlington's First Universalist Unitarian Society at the top of Church Street to discuss an old topic with new talking points.

The subject: Amazon. More specifically, how has the corporate giant infiltrated markets far beyond the online retail front for which it's known, and how can communities activate to counteract its negative impact on local retailers?

Phoenix Books, Northshire Bookstore and VTDigger.org organized the event, which featured Stacy Mitchell and Olivia LaVecchia of the national Institute of Local Self-Reliance. The two have received media attention recently for the publication of a 79-page report called "Amazon's Stranglehold: How the Company's Tightening Grip Is Stifling Competition, Eroding Jobs and Threatening Community."

That report provided the groundwork for the evening's discussion, which included an overview of the researchers' findings and a Q&A session moderated by freelance media producer and host Fran Stoddard.

Phoenix co-owner Michael DeSanto opened with brief remarks, noting a few questions he received when he posted the event on his store's Facebook page.

"One response asked us if we were just going to bash Amazon." The answer was no. One of the main purposes of the event was to discuss the company's business structure and how to support the vital local economies competing against it.

"One asked if we were going to be balanced," DeSanto continued. "We don't need to tell any lies," he responded with a smile, "but no."

Balance is not the name of the game, he said, because Amazon, a $500 billion company, already holds an excess of power.

Mitchell elaborated on that power in a summary of her report. "Amazon is, in many ways, very familiar," she began, citing the ubiquitous package bearing the Amazon "smile," as well as the company's reputation as a grocer, entertainment purveyor and merchandizer.

"But, in a lot of ways," Mitchell continued, "it's really invisible. It reaches into all these directions that we don't know about."

Amazon has established itself in the fields of movie and television production, book publishing and manufacturing, and it functions as a loan underwriter and even a contractor with the United States government. The Department of Defense has a $600 million contract with Amazon for cloud computing, analytics and storage services.

The picture Mitchell painted was bleak: a world in which Amazon controls every marketplace and the pipelines to them, eventually beating down competitors in both online and brick-and-mortar fronts. The result: less diverse and less economically stable local marketplaces.

A more comprehensive version of those findings and their causes can be found in Mitchell and LaVecchia's report.

Stoddard started off the Q&A session with a few queries of her own. First, she tackled one of the most common complaints against Amazon — its (previous) lack of compliance in collecting sales tax. As of April 2017, Amazon collects sales tax on direct sales from all 45 states that mandate a sales tax.

That practice, LaVecchia said, is "part of what's shaped the conditions under which Amazon has gained as much confidence as it has. And I think that there is this idea that Amazon has become as big as it has, as powerful as it has, kind of by outcompeting everyone else.

"[But if] we looked closely at the history of this company," LaVecchia continued, "a key part of its strategy was taking advantage of public handouts and benefits not available to its competitors."

She noted a recent South Carolina motion that claimed the state would lose $500 million in sales tax over the next five years if Amazon continued not to collect on third-party sales through its marketplace.

Audience members chimed in. One asked whether cities and states could operate their own grocery- and product-distribution services for local businesses the same way Amazon does. Another stressed the importance of early education in creating competent consumers.

One man brought up the prevalence of bookstores in Paris, perhaps referring to the 1981 Lang Law that disallowed selling books for more than 5 percent below the listed jacket price. The law has allowed independent bookstores to compete, and survive, in the age of Amazon.

Another audience member asked about the possibility of changing laws or regulations, to which Mitchell had a circuitous answer. To her, it seemed, optimism is embodied in conversation: that attendees would tell people what they had gleaned and engage in learning about and discussing Amazon. For the consumer, the takeaway seemed to be to put your money where your mouth is.

In an interview later, DeSanto suggested that actions need to extend beyond the "shop local" ideology. "We pretend that all is well with our capitalist world, and we don't have to nurture small businesses or the people that have invested in the downtown," he said. "There are [regulations] that governments at all levels could adopt that would help us keep afloat."

DeSanto stressed that his focus wasn't just on bookstores. "It's about bricks-and-mortar businesses in the cores of our downtowns that we say are really important to us," he said, "but still have a high rate of failure."