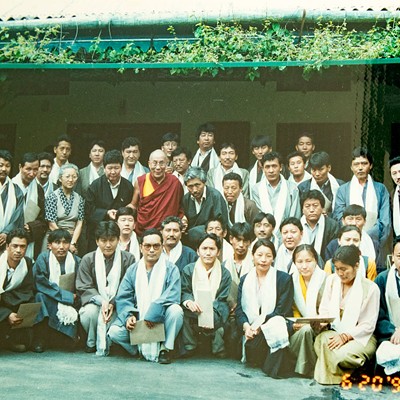 Multicolored Tibetan Buddhist tapestries hang on the walls of Pasang Thondup's living room in South Burlington, along with photos of his wife, Nyima Bhuti, and an illustrated map of Tibet.

Among these keepsakes are two archetypal symbols of Tibet: a framed photograph of the Dalai Lama — the spiritual leader of Tibetans — and a poster of Potala Palace, the Dalai Lama's former residence in Lhasa, capital of the Tibet Autonomous Region in China.

Formerly the political leader of the Tibetan exile movement, the Dalai Lama remains the spiritual guide of about six million Tibetans. Across the world, they typically hold celebrations on July 6 to mark the octogenarian's birthday and pray for his long life.

Few people have spoken with and worked for their god, but Thondup can claim that honor. An album containing photographs of him with the Dalai Lama reveals the unassuming man's illustrious former career as a settlement officer with the Central Tibetan Administration, whose seat of government is Dharamsala, India.

"We're happy to work for the government," Thondup said. "That is the most precious work."

Thondup is part of the 140-member-strong Tibetan community in Vermont, most of whom live in South Burlington. In 1998, at age 55, he moved to the Green Mountain State, where he worked in sales and manufacturing for a few years before retiring.

In his living room stands an altar holding 14 silver offering bowls full of water, two plates of mangos and a vase of flowers. An electric, multicolored prayer wheel is constantly in motion. Plush woolen Tibetan rugs and silky cushion covers made in India complete the décor.

"These are all my memories [from] where I worked and lived," said Thondup, referring to the rugs and cushion covers.

After Tibet came under Chinese rule in 1950, the Chinese government worked to eradicate Tibetan culture and language. It suppressed a Tibetan uprising in March 1959. Days later, the Dalai Lama fled Lhasa and sought refuge in Dharamsala. About 80,000 Tibetans eventually followed him to India, most of whom resettled there.

"Everyone was not happy with the Chinese control," Thondup said. "Everyone tried to escape from Tibet."

In December 1959, Thondup and his family, along with about 60 people from his village of Phari, escaped under cover of darkness over the border into Bhutan. They eventually made their way to India. Thondup, who was 15 at the time, left behind all his possessions save 14 offering bowls. His parents packed food for the journey.

Had he and his family stayed, Thondup believed, the Chinese military would have arrested his parents. "Maybe they [would have sent] us to Chinese schools in China," he added.

Thondup hasn't set foot in Tibet since he was a teen, but he remembers the last sight of his homeland clearly. "When we crossed the border and I looked back, I [felt] very sad," he said, his eyes growing misty. He recalled thinking, "We're leaving our country."

Thondup and his family resettled in Shimla in the northern Indian state of Himachal Pradesh. Like many Tibetans, he worked on road construction because no other jobs were available. Later, he attended school for a year before teaching the Tibetan language in locations across India.

In 1967, Thondup enrolled in the Tibetan school of public administration in Delhi because he "wanted to do something for our society." In 1969, he began working as an accountant at a handicraft center in Shimla. He worked his way up to the position of manager.

A decade later, Thondup was transferred to Arunachal Pradesh state to work as a settlement officer under the oversight of the Central Tibetan Administration. "It was a big responsibility," he said. He had to look after the economic and sociocultural welfare of about 2,000 people, most of whom worked in the agricultural sector.

"The main problem was huge elephants coming from the jungle, destroying the vegetables at night," Thondup said. The villagers chased the animals away with fire. They turned down the local authorities' offer to "send some forces," Thondup said, because they didn't want to hurt the animals.

When the Dalai Lama visited the settlement in 1983, Thondup told him about the problem. Days later, the spiritual leader sent electric fencing materials. But the settlement didn't need them because, "after [the Dalai Lama's] visit, the animals never [returned]," said Thondup, chuckling.

After 10 years in Arunachal Pradesh, Thondup was transferred in 1989 to the eastern state of Orissa. There he served as a settlement officer for a population of approximately 5,000 and had even more responsibilities, including addressing the shortage of drinking water, he said.

From 1992 to 1998, Thondup worked for the finance department at the government's headquarters in Dharamsala. He liked that posting the best, he noted, because the city was a "very peaceful place."

His wife moved to Vermont in 1993, one of 1,000 Tibetan exiles in Nepal, India and Bhutan to receive a U.S. visa under the Immigration Act of 1990 and a Tibetan lottery. Five years later, Thondup left the civil service to join her.

Unlike other immigrants who arrived in Vermont as refugees, the Tibetans were classified as "displaced people" and did not receive financial assistance from the U.S. government. The Burlington-based nonprofit Tibetan Resettlement Project — now defunct — was created in 1992 to help them get established.

Of his time in India, Thondup said the Dalai Lama told him, "You worked very, very hard during those periods. Now take care of yourself and do whatever you can for the people."

Thondup spoke little of the challenges he faced as a settlement officer. But Tsamchoe Namgyal Anak, a South Burlington resident who has known Thondup since their time in India, and whose husband was also a settlement officer, testified to the immense difficulties such civil servants weathered. "They worked so hard for the Tibetan people," she said, leading efforts to clear jungles so houses and schools could be built to preserve Tibetan language and culture.

Thondup hasn't returned to Tibet since 1959. The Chinese government rejected his application for a visa, and his employment with the Central Tibetan Administration will make a return to his homeland even more unlikely, he said.

In the 20 years since he moved to Vermont, Thondup has taken the Dalai Lama's advice to heart. He's still serving the community by teaching Tibetan at the Vermont Tibetan Community School.

That instruction is important, he noted, because parents commonly bring their children to India to visit relatives. "If they can't speak [Tibetan], then it's very shameful for them."

One day, Thondup hopes to share his story with his students in the language of their ancestors. "When [the] time comes, then I will tell them," he said. "When they pick up the language better — when I say something, they will understand."

The Tibetan Association of Vermont will hold celebrations to mark the Dalai Lama's 82nd birthday on Thursday, July 6, at 8 a.m. at Oakledge Park in Burlington. Learn more about the group at facebook.com/tibetanassociationvermont.

The original print version of this article was headlined "Living History"