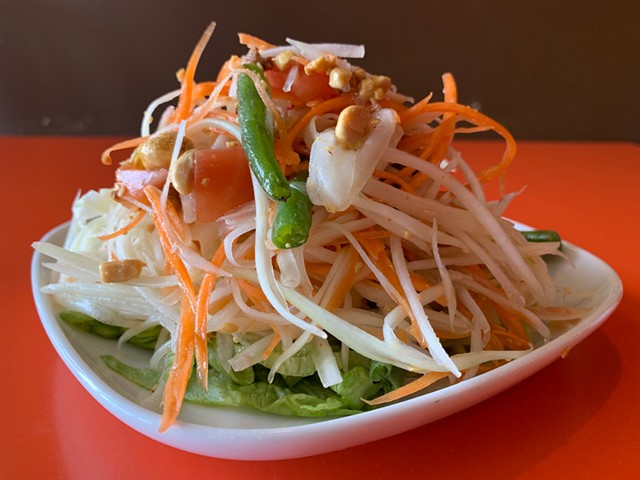 Suvi Yimnirun picked the auspicious date of February 22, 2022, to open Suvi's Kitchen at 370 Shelburne Road in Burlington. The new Thai restaurant realizes the longtime chef's dream of having her own place. "I can decide the flavors and the menu," she said.

That menu includes Thai classics, such as green and red curries mellowed with coconut milk, and Yimnirun's own inventions, such as pad Thai topped with fried chicken. "American people like fried chicken," she said.

Before Yimnirun, 44, moved to the U.S. in 2015 from her native Thailand, she cooked in a five-star restaurant in Bangkok, she said. For five years, she cooked at Royal Orchid Thai Restaurant in Montpelier and the now-shuttered Thai Dishes in Burlington.

The chef co-owns Suvi's Kitchen with her husband, Seth Quittner, 46, who also works in car sales. The two met when Yimnirun was looking for a car. "She invited me to Thai Dishes to try her food," Quittner said. "She kept bringing me food."

The couple started seriously seeking a location about a year ago. "We saw the pent-up demand" for dining out, Quittner said.

Suvi's Kitchen occupies what was the Vietnamese restaurant M-Saigon for more than a dozen years. M-Saigon announced on social media this week that it would reopen on March 11 in the space next door to Suvi's Kitchen as M-Saigon Bánh Mì & Boba Café with a focus on bánh mì sandwiches and bubble tea.