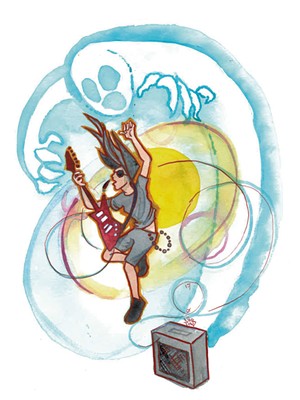 I am deathly afraid of spiders. I feel sick at the very presence of an eight-legged creep in my general vicinity, indoors or out. The fear stems from watching the film Arachnophobia when I was in second grade. My parents were overprotective and had only just started letting me watch PG-rated movies; PG-13 flicks would normally have been out of the question. But, one day, our neighbors had rented the spider-centric Jeff Daniels black comedy for their son, who was the same age as my older brother. My folks were distracted with a large home renovation project and uncharacteristically gave me the green light to watch the movie with the older boys.

A quick synopsis in case you haven't seen it: Some jacked-up spiders run amok in a small, northern California town and kill a bunch of people — but, like, in a funny way. It's definitely not a horror movie. However, being the sheltered 8-year-old that I was, it was the most terrifying thing I'd ever watched. I was utterly traumatized.

For months afterward, I couldn't sit on the couch because I knew that there were spiders hiding between the cushions. I couldn't drink opaque liquids because of a particular scene involving a glass of milk. Every itch, tickle or otherwise corporeal sensation sent me into a tailspin because I thought there were spiders crawling on me. All of this from a boy who used to pick up daddy longlegs and let them walk around on his arm.

My terror extended well into my late teens. Eventually I learned to manage the fear — and also finally understood that it was irrational. (To wit: Arachnids rarely attack people.) Spiders still wig me out, but I can function around them. I even re-watched Arachnophobia when I was in my early twenties. I laughed.

We all have plenty of rational fears, and rightly so. But it's our irrational frights that perhaps unnecessarily hold us back, whether they are common terrors like the dark, clowns and spiders or more unique aversions such as, say, shaving your beard. Side note: Irrational fears also tend to be more fun.

Having fear on the brain with Halloween just days away, Seven Days recently polled local musicians and scenesters about their most absurd anxieties. We found that they ran the gamut from the comparatively mundane to the, well, manscaping. The hope is that by reading about these folks' irrational fears, you might gain a little power over yours.

I am completely freaked out by uneven, asymmetrical circles. I have been reduced to tears looking at a sea sponge. I've thrown up out of a moving vehicle because other passengers were passing around photos of a beehive.

I recall lying on my front lawn as a child and suddenly feeling as though 1,000 grasshoppers had leapt on me at once. Their prickly legs dug into my skin, and I was overtaken with a paralysis that has yet to be matched. [Then] I came across deep-fried grasshoppers and figured if I can eat my fears, I have the ultimate power over them. I learned earlier this summer, while darting away from a hoppy visitor in the tall grass at Oakledge Park, that was not the case.

I have an irrational fear of sharks. They are remarkable and beautiful creatures, and, thanks to [Jaws author] Peter Benchley, I can't get into anything much larger than a well-chlorinated kiddie pool. But I still love Shark Week [on the Discovery Channel] ... from the safety of my couch.

I'm afraid to shave my beard. I'd have to remeet a lot of people and respond to reactions of shock and possibly anger if people don't like my chin — not to mention answering over and over the age-old question of, "Why?"

Peg Tassey and the Kissing Circle

I'm horrifyingly afraid of falling up. I don't really trust gravity. When I'm faced with a wide-open field or open-beach vista, I literally have an out-of-body experience that feels like I'm going to fall into the sky and have a heart attack.

I am occasionally overcome by the fear that I will be framed and convicted for a crime I did not commit. In my anxiety-fueled fear spiral, the crime is usually murder. I would credit the Serial podcast, but the fear started way before that.

I'm afraid of bugs. I once flung a butter knife at a woman because bees kept swarming around my waffles. The knife had fallen in my lap, and as I swatted an oncoming bee the knife flew and hit her. She swore at me. Then they moved me inside.

Elevators: Sure, they're convenient, but they are basically steel cages of death — or at least a forced panic room if they get stuck. I hate 'em, and I go out of my way to avoid them, even if I have gear to load in. To avoid the ride, I shove my DJ gear in the elevator, punch the floor button then race up the stairs. I always lose.

I'm a huge fan of standup comedy. But I'm absolutely terrified of being addressed by a comedian during a show. I go so far as to time my arrival at comedy venues so I won't be seated too close to the stage. There are times when the performer is someone I truly respect and admire, but the idea of interacting with them in front of an audience makes me feel like I am going to faint.

Hayley Jane and the Primates

I am terrified of sending the wrong email to the wrong person — whether it's inappropriate, containing confidential [information], etc. Then Gmail came out with the "undo" button for sending emails, which has lowered my anxiety greatly.

I grew up in the woods of Massachusetts, so naturally I'm terrified of the dark. The fear wasn't even so much from what could be there, but not knowing what was there.

I think squirrels are Satan's offspring. Every time a squirrel runs in front of me, a little piece of me dies. Squirrels are terrifying.

Sometimes, when taking a shower or going to the bathroom, I become afraid that someone is going to come into my house and murder me. I frequently leave the bathroom door open in order to quell this fear.

My biggest irrational fear: getting a letter in the mail that says, "Hey. We caught you. We know you're a fake. Everything you do is false, and you have no authentic talent. Please leave."

The original print version of this article was headlined "Scared Silly"