Ann Bedichek Braden, a Brattleboro-based grassroots organizer, was heartbroken by the result of November's presidential election. But she hasn't taken it lying down. In early December, Braden was among a group of 70 people who convened at the Bethany United Church of Christ in Montpelier to discuss the future of "Pantsuit Nation." The Vermont spinoff of that Facebook group had sought to share "the Hillary love in the Green Mountain State."

At the meeting, Braden met women who, like her, sought to craft an achievable and practical strategy to counter hate rhetoric. Together they created the Local Love Brigade — Vermont. The group's mission, according to its Facebook page, is to "band together when there is an incident of hate and respond with giant helpings of love."

How does that look in practice? Love Brigade members send postcards in support of individuals, religious institutions or businesses that have experienced a hate-based incident in the state or region. The Facebook group counts more than 1,000 members so far, most of them in Vermont.

These love notes are "an important piece of resistance against the current hate," Braden says. The mother of two is also the founder of Gun Sense Vermont, a gun control advocacy group.

"We have to strengthen the community so that fear does not win," Braden adds. "Love is the overarching fabric in our community to hold dear."

Kelly McCracken, a mental health counselor from Montpelier, is another founding Love Brigade member. Just weeks ago, she sent a postcard to then-president-elect Donald Trump as part of a wider "postcard avalanche" effort protesting the appointment of Steve Bannon as Trump's chief strategist and senior counselor.

Since the inception of Local Love Brigade — Vermont, eight other chapters have been established, according to Facebook, in Georgia, Massachusetts, New York, North Carolina, Oregon, Texas, Virginia and Washington.

Sending a love note is simple. LLB members usually learn about incidents of hate through news reports or personal contacts. They add the recipient's name and address to a Google document, which participants can access through the Facebook page. Then they fill a postcard or index card with hearts — sometimes accompanied by a message or drawing — sign their name and town, and send it to the hate victim. Some members post photos of their cards on the Facebook page to motivate others. 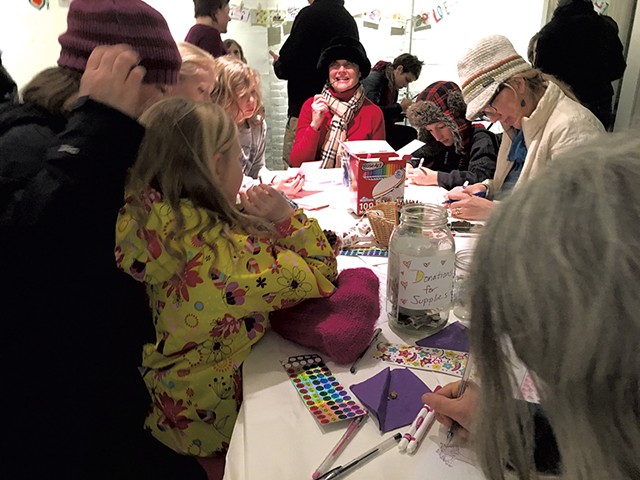 So far, most of the postcard recipients have been religious institutions across the country. The first to receive the group's messages of support was the Islamic Society of Vermont. The community mosque in Colchester had received anonymous hate mail in early December.

Other recipients include the Havurah House in Addison County, where vandals painted swastikas on the front door; Emanuel African Methodist Episcopal Church in Charleston, S.C., where nine people were killed in 2015 during a Bible study; and the Syrian refugee families who were recently settled in Rutland.

Jeb Bouchard of Moretown had sent messages of support to mosques even before she joined the Brigade. When she got a reply from a mosque in Morgantown, W.V., last November, Bouchard says, she "felt good."

"When I am stressing out about the new administration, I go to the [LLB Facebook page] and breathe in the love," Bouchard notes. "My heart sings when I see posts of children making postcards; their artwork fills me with joy and hope."

The Waitsfield and Champlain Valley Telecom system analyst admits she didn't "realize how much racism there is in this country." Although she's an atheist, Bouchard says she will register as a Muslim if the Trump administration imposes such a registry.

Sharon Panitch, a theater producer in Burlington, has made the postcards and received them. Soon after the ISVT received hate mail, she reached out to the community to say, "I support them." As a Jew, and at a time when "so much anti-Semitism [is] coming out," Panitch says, she felt "really obligated to speak out and make a connection."

When anti-Semitic flyers were distributed at Burlington City Hall Auditorium last December, Ohavi Zedek Synagogue, of which Panitch is a member, got postcards from the Brigade.

"It is heartening to see that people are paying attention and that hopefully it won't come to it, but if we need people to join us, stand up for us, there are people out there," she says.

In Montpelier, McCracken says creating the postcards has become a family activity. Her children and their friends often join in. If the card recipient is a child, she spends "extra time on details," McCracken says.

The counselor feels a "mixture of hope and sadness" when she makes a new card, but the activity helps her "stay more positive," she says.

Braden agrees with her friend. "It's also self-care. You feel better after doing it," she notes.

These days, Braden also organizes postcard-making parties in her area. Last Friday, she and a group of some 60 people gathered at the Catherine Dianich Gallery in Guilford to make cards that will be on display there through February. Postcard-making sessions will continue at the gallery on Fridays (as well as Valentine's Day) until all the cards are sent off at the end of the month.

So far, internet trolls haven't targeted the group, Braden reports. "It's been quiet. It's hard to disagree with love."

Local Love Brigade postcards, on view and for making, Fridays through February, 3 to 5 p.m.; and Tuesday, February 14, 11 a.m. to 1 p.m., at Catherine Dianich Gallery in Guilford.

The original print version of this article was headlined "Mail Model"