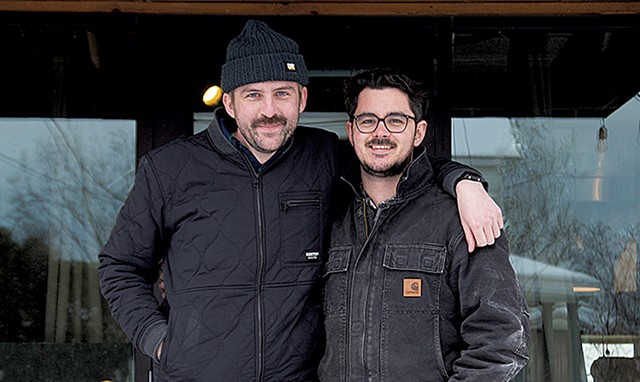 A new restaurant will spring up this spring at the former Butch + Babe's space at 258 North Winooski Avenue in Burlington. May Day will "celebrate all of our farmers, purveyors, orchards, winemakers and the lush bounty Vermont offers," co-owner and chef Mojo Hancy-Davis said.

Co-owner and general manager Matthew Peterson has a tradition of gathering friends for a river swim and feast on May 1 — hence the restaurant's name. "It captures the energy we want the restaurant to have," Peterson said.

Hancy-Davis, 29, and Peterson, 31, will preview their fare with a lunch pop-up at Burlington's Dedalus Wine Shop, Market & Wine Bar on Saturday, February 5. The menu features a bitter chicory salad and sandwiches with homemade porchetta and rare roast beef, all paired with "the most fun wine possible," Hancy-Davis said. A second pop-up at T. Rugg's Tavern is scheduled for Monday, February 21.

Once May Day opens, the restaurant will serve lunch and dinner Thursday through Monday, with the same menu all day.

"It's really important to me that we're as from-scratch as possible, using familiar things in new ways," Hancy-Davis said.

"Dress it up or dress it down," Peterson added.

For instance, the team might make bread and charcuterie in-house for deli-inspired sandwiches, as well as shareable small plates and rustic, deep-flavored dishes such as lamb meatballs with apricot ragout. The bar will serve natural wines from off-the-beaten-path producers, as well as classic and rotating seasonal cocktails.

The owners met eight years ago while working at Misery Loves Co. in Winooski before moving on to other Burlington-area food businesses. Peterson spent several years behind the bar at Hen of the Wood before working at Dedalus. Hancy-Davis ran the Carte Blanche food cart with Chris Donnelly, spending off-seasons at the Great Northern and Hen of the Wood.

They're currently painting the neighborhood spot and putting their stamp on it, with plans to add counter dining to the open kitchen and roll up the garage doors for patio seating.

"We want it to feel summery in here year-round," Peterson said.

The original print version of this article was headlined "Budding Biz"