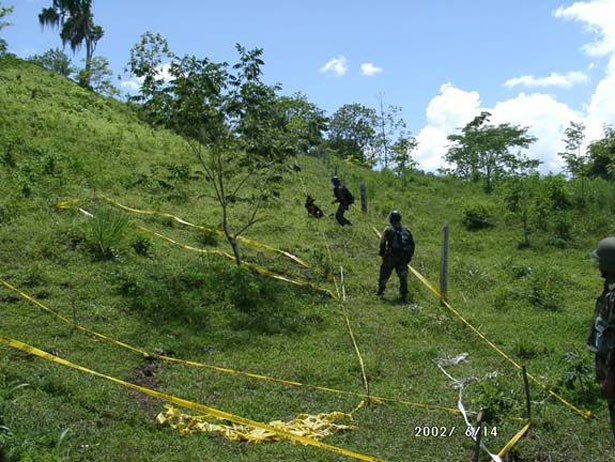 Not all Vermont's Girl Scouts are out selling Thin Mints. The 11- and 12-year-olds in troops 820 and 125 - in Williston and Essex Junction, respectively - wanted to know what life would be like for someone hurt by a landmine. Troop leaders Jennifer Mignano and Chandelle Trahan came up with a fitting assignment: Have them make fleece blankets for local emergency shelters with one arm strapped to their sides.

"At the end of our meeting, they were begging me for their arms back," Mignano recalls. "They were like, 'This is really, really hard!' And I said, 'But real landmine victims don't ever get their limbs back.'"

The girls' practical lesson in the harsh and indiscriminate tactics of modern warfare began in October 2006 as a seemingly fun project. Mignano's girls told her that they wanted to "do something with dogs." Coincidentally, just weeks earlier, Mignano had attended a potluck dinner at her church, where she met Kimberly McCasland, a dog handler who works with landmine-detection dogs on behalf of the Marshall Legacy Institute (MLI). The Virginia-based nonprofit was founded in 1997 by the children of Gen. George C. Marshall as a way to carry on the spirit of the World War II-era Marshall Plan.

Today, one of MLI's primary missions is landmine education. Each year, about 20,000 people in more than 60 countries are killed or maimed by landmines, most of them civilians and many of them children. So in April 2007, McCasland visited local schools to demonstrate how a de-mining dog works.

Unlike mechanical mine-detection equipment, which detects the metal in an antipersonnel device, mine-sniffing dogs smell the gases emitted by the explosives. As a result, mine-detection dogs are considered one of the most reliable methods for finding and removing landmines.

From that visit, the girl scouts of troops 820 and 125 decided they wanted to "adopt" a de-mining dog of their own, which was no easy task. Since mine-detection dogs are among the most highly trained working dogs in the world, the cost of acquiring, training and delivering one to a host country runs about $20,000. Moreover, due to the painstaking and extreme danger of the work - for handler and dog alike - nearly one-third of all canine candidates wash out of the academy.

But dogs that successfully complete the six-month course - either in Summerset, Texas or in Bosnia - are placed with a handler in one of 23 countries. There, the team undergoes an additional four to six months of training to learn how to work in the local terrain and recognize the landmines that are common to the region.

Undeterred by the price tag, the Girl Scouts spent most of last summer holding bake sales, car washes, dog baths and selling goods door-to-door. They also received generous support from groups such as the Green Mountain Kennel Club, the Lake Champlain Maritime Festival, the Rotary and Lions clubs and the Williston Historical Society. Last fall, the girls finally reached their goal when a woman in California heard about their campaign and mailed them a $5000 check.

When their dog, whom the girls have named "Champlain," is fully trained, it'll likely be placed in Lebanon, Mignano says. The girls don't know yet what kind of a dog Champlain will be, or what gender, since the dogs are sent to the academy in "six-packs" and the best ones are eventually placed. However, once Champlain is selected and placed in its host country, the girls will be able to follow its progress via the Internet and get regular updates on how many mines it's found.

Following on their recent success, the Girl Scouts decided this spring to take their fundraising efforts one step further, by sponsoring a 17-year-old landmine victim in Sarajevo.

Anita Vidovi was 11 years old in April 2001, when she stepped on a landmine near her neighbor's field and lost her right leg below the knee. Since her family can't afford to provide her with the prosthetic upgrades she'll need as she grows, troops 820 and 125 plan to raise $6000 on her behalf as part of MLI's Children Against Mines Program. On March 28, they'll advance that goal with a fundraiser featuring Sen. Patrick Leahy as well as a performance by the Bosnian Lilies, a local children's song and dance group.

Asked why they were willing to devote so much personal time to raising money for people thousands of miles away, the scouts give answers that range from the humorous to the poignant. Several express the view that, "Their stories are so sad," or "It makes you feel good to know you're helping somebody." Corinne Loiseau says that when she first saw a photo of a landmine victim, she found it "really shocking, because here, the worst thing we worry about stepping on is a spider."

Caty Mara summed up best the sentiments of several of her fellow scouts: "For them, that one step could be their last."