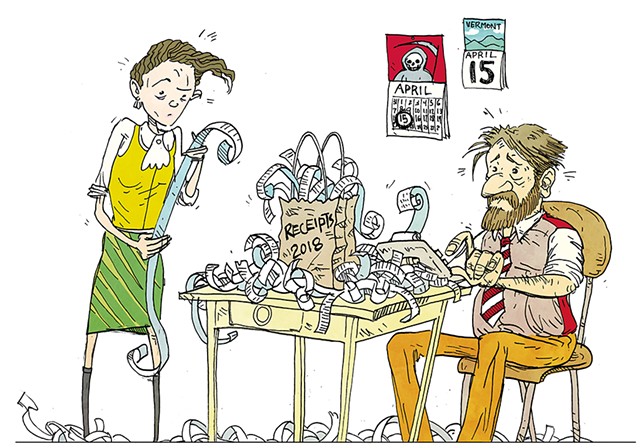 To paraphrase an old chestnut, nothing is certain in life except death and that doing your taxes will be a pain in the ass. That's doubly true this year, with numerous revisions to the federal and state tax codes in 2018. Thousands of Vermonters are scrambling to make sense of their finances before April 15, aka Tax Day. To get a feel for the questions locals might be struggling with, we polled Seven Days staff. They responded with queries about everything from the pros and cons of filing jointly to why we can't claim pets as dependents.

Next, we posed those questions to a pair of local tax experts: Burlington's Dakota Brizendine, a 28-year-old financial adviser and partner at Commonwealth Financial Group in Colchester; and Justin Wicks, a 37-year-old certified public accountant from Morrisville who co-owns Stowe CPAs.

Both of our experts stressed that everyone's financial situation is different and there are no one-size-fits-all answers when it comes to taxes. So, while you may glean useful insights here, don't take this article as actionable tax advice. If you've got questions, talk to your own accountant.

Why the hell is my refund so small? Or: How the hell do I owe taxes this year?

Millions of taxpaying Americans who typically expect money back on their taxes have been surprised and angered to find that their refunds are smaller this year — or, worse, that they actually owe the government. That's because marginal tax rates were lowered across the board in 2018, while the standard deduction nearly doubled.

"On the whole, that means people likely paid less in taxes," says Brizendine. Refunds were lower because less was withheld in the first place. At the same time, hiking the standard deduction makes it harder to itemize deductions.

Brizendine and Wicks both suggest checking to make sure the proper amount is being withheld from your paycheck — especially if you ended up owing this year. When everything works as it should, they say, you should never owe more money. However, in the ideal scenario, you should also never get money back.

"If you think about it, all a refund means is that you gave the IRS an interest-free loan," says Brizendine. Rather than counting on a refund to put toward a car repair or a vacation, she advises ensuring you have the correct amount withheld from your paycheck — the Internal Revenue Service website has calculators to help — and investing any leftover money in an interest-bearing account such as an IRA.

I got married last year, but filing jointly didn't seem to make much of a difference versus filing independently. What benefits should we have expected, and could we have done something to get them?

For many married couples, filing jointly is beneficial because it locks the spouses into a lower marginal tax bracket. But, as Brizendine notes, taxes are a "very personalized situation." They're a puzzle whose individual pieces — income, deductions, credits — vary enough to present a different picture each time they're assembled, as one newly married Seven Days staffer discovered.

"It may be that one spouse's income was already falling into a lower bracket, so they didn't see a difference when filing jointly," says Brizendine. "But it really depends on the situation."

"Ninety-five percent of the time, it's still more beneficial to file jointly," says Wicks. However, he adds that joint filers are prohibited from taking certain deductions, such as those for student loans, which may affect their overall tax picture.

Why wasn't the State of Vermont ready to accept my return when filing season opened on February 1?

One proactive Seven Days employee was miffed when she filed her return through an online tax-prep service well in advance of Tax Day and was informed that the state couldn't process it immediately. According to Wicks, that's not uncommon.

"This happens every year," he says. The reason is that software companies must approve federal and state tax forms and account for their various new features before the IRS or individual states release those forms to the public. The IRS has its forms approved well before tax season. But some states lag. "Vermont is notoriously behind in releasing the forms," says Wicks.

Why can't I claim my cat as a dependent?

You feed them; you provide for them; you pick up their poop. You love them like they're your children and, like kids, they depend on you for their survival. So, one feline-fancying Seven Days staffer wondered, Why can't you claim pets as dependents?

The "IRS rule just states that animals can't be considered dependents," says Brizendine. "Hopefully the cat's income can support its lifestyle," she jokes. "Maybe get some modeling gigs?"

However, Wicks points out that certain deductions may be made for other kinds of beasts.

"If you have a certified service animal, that's a medical expense, so you can write that off, with certain limitations," he says. Ditto the proverbial junkyard dog. "That's a security system. That's a write-off."

Why can't I get a tax break like the 1 percent?

"It's easy to say that the rich don't pay any taxes," says Brizendine, "but if you look at someone who makes $1 million a year, they're in the 37 percent tax bracket, so they're effectively paying almost 40 percent of their income in taxes."

She adds that wealthy people do get significant breaks, but "they are actually paying a lot in taxes."

"It doesn't feel right when someone's refund is $70,000 greater than it was the year before," says Wicks. "But the effective rate is 8 percent for the $75,000 couple and 37 percent for the millionaires."

At what point should I consider hiring a CPA?

My own tax situation is pretty simple: I'm single, I rent my home, and I have no dependents and just one source of income. I've been able to e-file my taxes annually in about 30 minutes. Clearly, I have no need for a CPA, right? Not so fast, says Brizendine.

"We joke in the industry that there are 'shoebox CPAs' and there are proactive tax planners," she says. The former gather your receipts — presumably stuffed in a shoebox — add everything up and tell you what you owe. Programs like TurboTax "are amazing" for that, she says.

By contrast, the proactive tax planner, Brizendine explains, can help filers figure out not only what happened last year but also how to minimize liability next year. "They can create strategies for how to utilize the tax code to your advantage," she says, adding that even people in straightforward situations can benefit from heightened attention.

Wicks notes that certain new circumstances might justify bringing in a pro, such as changes in income or marital status, ownership of rental property, or self-employed status. But he adds that he regularly declines customers whose tax situations wouldn't benefit from his expertise.

"Sometimes it's just not worth spending the money," he says.