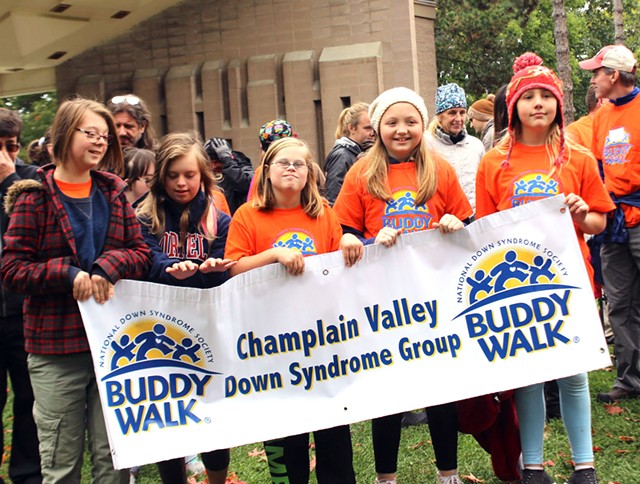 When Lisa DeNatale moved to Burlington from Portland, Oregon, with her husband, Steve Boutcher, and their two young children in 2000, she immediately felt that something was missing: a community of families whose children have Down Syndrome, like the tight-knit group she'd left behind on the West Coast. Her son, Harrison, was 6 at the time and the only person with Down Syndrome at Edmunds Elementary School. A decade later, DeNatale would recreate that network of support here, cofounding the Champlain Valley Down Syndrome Group in 2010. Since then, it's grown to include 80 Vermont families.

On September 26, more than 200 people are expected to attend the organization's 11th annual Champlain Valley Down Syndrome Group Buddy Walk which takes place from noon to 4 p.m., beginning and ending at Battery Park in Burlington. The Buddy Walk is one of 250 such events happening across the country this fall affiliated with the National Down Syndrome Society. The route will trace a one-mile loop through Waterfront Park and finish with Ben & Jerry’s ice cream and refreshments.

“The Buddy Walk is designed to raise awareness for people with Down Syndrome to celebrate their gifts, their talents and qualities in a way that the community can see. It's a way for us to demonstrate that publicly,” said DeNatale who is also the past president and CEO of Special Olympics Vermont.

Tim McQuiston, editor of Vermont Business Magazine, is one of the organizers and has been involved since the beginning. He said the walk helps connect new families to the group, especially parents with infants and toddlers, and expectant parents who have just received a Down Syndrome diagnosis.

“Maybe their kids aren’t in school or they’re prenatal and they don’t have that built-in community yet. They’re wondering where to turn. They can turn to us,” said McQuiston, whose youngest son, Justin, 23, has Down Syndrome.

In addition to its annual walk, the group holds quarterly family gatherings, a summer picnic and connects members through a list serve, where they can seek advice and share information. DeNatale said the group focuses on “empowering families to have the support to advocate for their child whether that’s in school, the medical community, employment or housing.” 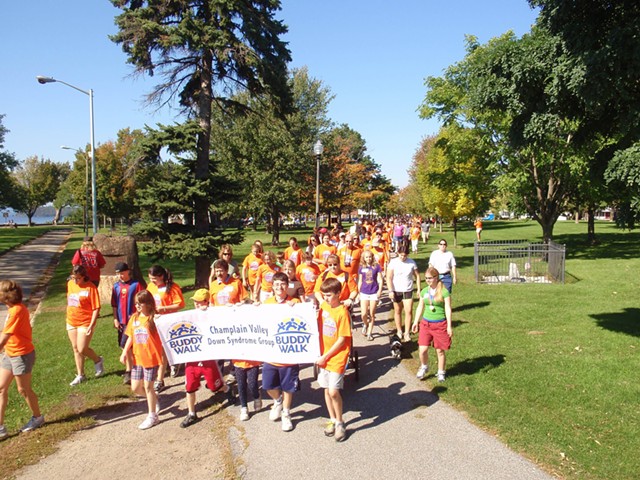 DeNatale’s son, Harrison, graduated with his class from Burlington High School where he ran on the cross-country team, was on the track team and was part of the school newspaper. Now 27, he lives independently with a roommate and works at Zero Gravity Craft Brewery as a production assistant, and at Pizzeria Verità as a host.*

“When Harrison was born, we didn’t imagine those things as being a possibility. We were hopeful, but it was unclear to us,” said DeNatale who praises the Howard Center and other local organizations that promote independence.

“I am always so happy to speak to families who are thinking about moving to Vermont, specifically to the Burlington area, because I feel like I can share with them a very hopeful outlook for their child,” said DeNatale.

Families, neighbors, friends or anyone who wants to support are welcome to join the Buddy Walk. Those ages 10 and older must register. Participants can sign up in advance here for $8 per person; the fee maxes out at $30 per family. On-site registration is also available at Battery Park on the day of the event; participants can pay with cash or check.