Local Community Takes on The Blues Brothers to Save a Barn 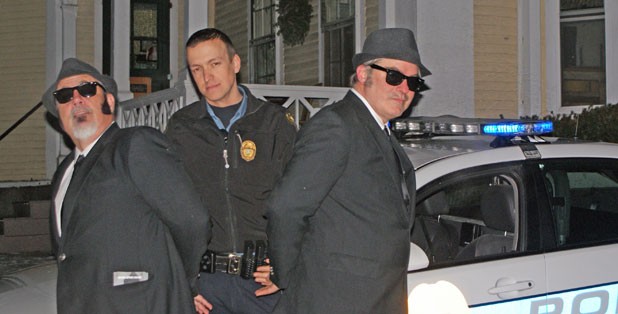 The 1980 movie The Blues Brothers, which starred John Belushi and Dan Aykroyd of “Saturday Night Live” fame, earned $115 million in its first year. With this weekend’s stage show The Blues Brothers, the Blue Barn Players of Maple Corner fame have far more modest ambitions. They’re hoping to raise $9000 to cover renovations on a historic landmark in their tiny town — a blue barn.

The three-story, 19th-century former dairy barn, now cooperatively owned by three families, is occasionally a venue for amateur theatrical productions for local kids, not to mention Motown dance parties and other events for the close-knit community. Friends and neighbors Chris Miller and Chris Colt are two of those barn owners, and they are the creators of an ingenious production that turns a 2-and-a-half-hour movie filled with car chases, explosions and other mayhem into an hour-and-45-minute stage adaptation that isn’t. What the latter keeps, of course, is the music. The Blues Brothers, Vermont style, hits the Barre Opera House stage this Saturday for two shows only.

How did the production come about? “We decided to put on an adult show — the kids have all the fun,” faux-complains Miller, a granite sculptor. Colt, a theater teacher and director at Johnson State College, wanted to do a musical. “I hate musicals,” Miller says. “I wanted a comedy. We compromised on The Blues Brothers — a comedy that has a lot of great music in it.”

Of course, there is that little matter of copyright. And it turned out to be almost no matter. Aykroyd and Belushi’s widow, Judy Belushi Pisano, gave the go-ahead. “She was incredibly warm and funny and gracious and said she loved community theater,” Miller states in the group’s press release. “She said she had always wanted to see The Blues Brothers done as a play, and even asked us to send her our adaptation.” Miller notes that he invited Pisano, who lives on Martha’s Vineyard, Mass., to the show, but she is unable to come.

Miller found the movie’s script online and proceeded to condense it with Colt — the two will play Jake and Elwood Blues, respectively. “We tried to stay true to the original dialogue, but had to speed up in some places because you can’t cut to another place like in film,” explains Miller. He says the movie, at its heart, is “an incredible story”: Ex-con Jake and his brother Elwood are “on a mission from God” to raise money for a Chicago orphanage. Their plan is to reunite their old band and perform one big benefit concert. “The whole story is really about putting these old blues musicians together,” says Miller. There is, however, a little trouble with the law along the way. That’s why the Vermont bros persuaded local police to “arrest” them, creating the perfect publicity photo.

In Miller and Colt’s revised script, “We decided that obscure Chicago references wouldn’t be nearly as funny as Vermont references,” Miller says. So the Cook County Prison becomes the St. Albans lock-up, and so on. “We definitely made it local,” he adds.

“I tell people, the story is fun, the dialogue is fun, but the whole thing is really about the music,” Miller continues. Of course, Aretha Franklin, Steve Cropper, Cab Calloway et al. weren’t available for the Barre production, but no worries: “We’ve got a killer band!” Miller declares. Lewis Franco, also a Maple Corner resident and lead singer for the Missing Cats, will play Cab Calloway. J.C. Myers will be the minister, played by James Brown in the movie. Nancy Toulis, wife of guitar player Artie Toulis, has the honor of filling Franklin’s shoes, and voice — her pivotal diner scene in the movie transplanted to a local eatery on stage.

Though the Barre Opera House — and this production’s budget — can’t accommodate high-speed car chases or pyrotechnics, Miller did find one pretty awesome prop: Jake and Elwood’s car. “At a junkyard, I bought a 1974 Dodge Monaco,” Miller reports gleefully. “They Sawzalled the front end. We couldn’t do this without the automobile!”

What is it about the men of Maple Corner? Some Vermonters will recall their “naked calendar” from a decade ago — a benefit for a local community center that scored national attention and inspired copycat fundraisers around the state. This time, Miller and Colt will be fully clothed in the Blues brothers’ signature black suits and white shirts — and, naturally, shades and fedoras. The show this Saturday is rated PG; the movie’s explosions didn’t transfer, but some profanity remains intact. Promises Miller: “It’s going to be really, really, really fun.”