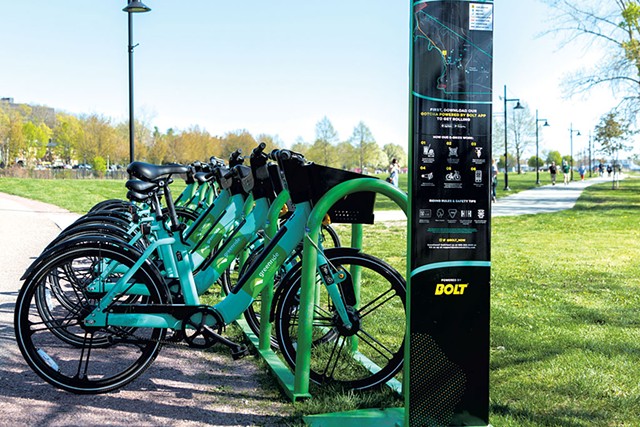 Big Tech. Big Pharma. Big E-bike? The relaunch of the Burlington area's pay-as-you-go bike rental program, Greenride Bikeshare, has reignited a debate over whether the city is placing the interests of a large out-of-state company ahead of local businesses. The dispute spans several years but has become sharper this spring after the bike-share's Miami-based vendor replaced its fleet of pedal bikes with electric-assisted ones. That's stirred fears that the program will cannibalize Burlington's already competitive e-bike rental market.

Some local pedal peddlers believe they are fighting a corporate Goliath, and they are urging the city to do more to protect their interests.

"The local people that have been doing this for all these years, they're the ones that deserve to benefit," said Rick Sharp, owner of Burlington Segways, which he says makes about 50 percent of its revenue from e-bike rentals. "Not some out-of-state company that's just going to come in here and skim the cream off the top."

The electrification of bike-share programs has accelerated in recent years as cities seek to attract more riders and further curb car traffic. The thinking is simple: Bike-shares need a healthy customer base to be sustainable, and the electric boost helps casual riders overcome frequently cited barriers to cycling, such as fatigue, sweating and hills.

A quarter of the 250 cities with bike-share programs in 2019 offered e-bikes, according to the North American Bikeshare Association, which found that the electric options were used almost twice as much as their pedal-only counterparts. Backers of the Burlington-area Greenride hope the transition to an electric fleet sparks increased interest here.

Launched in 2018, Greenride is a collaboration between the Chittenden County Regional Planning Commission, the Chittenden Area Transportation Management Association (CATMA), Champlain College, the University of Vermont and three cities: Burlington, South Burlington and Winooski. It was funded primarily through local corporate sponsorships, though Burlington contributed $40,000 in the first year.

Gotcha, a South Carolina firm, operated the system until earlier this year, when Bolt Mobility acquired the company. Bolt has since entered into a yearlong contract with CTMA and the three cities, granting the company exclusive rights to the local bike-share market. In exchange, Bolt followed through on its predecessor's promise to expand and electrify the Greenride fleet, recently replacing its 105 pedal bikes with 200 electric-assisted ones. It is also establishing a dozen more hubs — glorified racks from which riders pick up and drop off bikes using a mobile app — for an eventual total of 30.

Current pricing options include a pay-as-you-go feature — users pay $1 to unlock the bikes and then 35 cents for each minute thereafter, meaning the first hour costs $22. The company also offers a $99 annual plan that provides 30 minutes of daily ride time for no additional cost. None of the three cities receives a cut of the revenue; rather, they benefit from the system's existence, said Rob Goulding, public information manager at the Burlington Department of Public Works.

While some bike-share programs strive to attract recreational riders, Greenride is meant as an eco-friendly way to commute to work, run errands or visit friends — "essentially trying to replace car trips," Goulding said.

"The one thing we absolutely align with the local bike shops on is to avoid creating a joyride-based system," he said.

Bryan Davis, senior transportation planner at the regional planning commission, agreed. "We don't want people to take bikes out for two hours at a time and go exploring," he said. "That's what the bike shops are for."

None of the four businesses that spoke to Seven Days for this story had an issue with Greenride in theory; they noted that the bike-share system could serve as an important cog in the broader alternative transportation network. But they said it has so far failed to live up to its stated goal.

For example, roughly half the trips taken on Greenride bikes last October began and ended at a single hub near ECHO Leahy Center for Lake Champlain at the bottom of College Street. That suggests riders were simply using the bikes for breezy spins along the Burlington bike path or waterfront instead of, say, to pick up groceries.

The data reflect a harsh truth for existing businesses: While they can beat Greenride's prices — most offer daylong rentals for about $50, similar to what it would cost for a two-and-a-half-hour bike-share rental — they struggle to match its convenience.

Business owners say the city has contributed to their competitive disadvantage by allowing Bolt to install and maintain hubs around town for free, including one near the waterfront. "Tell me what bike shop in town gets their place for free?" Sharp asked.

A spokesperson for Bolt declined to make anyone available for an interview and did not respond to emailed questions after requesting them.

Two downtown bike shops say they are bracing for their rental business to take a hit this summer.

J.P. Coseno, a manager at North Star Sports, said e-bike rentals can make up to 30 percent of a day's sales at the Main Street shop — revenue that will be even more important this year after a nationwide bike shortage has limited the shop's inventory.

"I feel a degree of helplessness, but I can't put all my energy there." Zandy Wheeler tweet this

Across the street at Skirack, co-owner Zandy Wheeler expected to have about 15 e-bikes to rent this summer.

"I've been around long enough to know that when you get an elephant walking around, you don't get underneath their feet," he said. "I feel a degree of helplessness, but I can't put all my energy there. I've got to do better than they're doing."

Karen Yacos, executive director of Local Motion, said a third of her organization's revenue comes from its rental business along the bike path. As the leader of a nonprofit that encourages people to get out on bikes more often, Yacos finds herself in a tough position. On one hand, she strongly supports the concept of bike-shares and said she believes that Greenride and Bolt could benefit the area. On the other, she worries that the city could undermine its local bike shops if it isn't careful.

"Do I think [Bolt] will be here in five years? I wouldn't place money on that," she said. "Do I want North Star and Skirack to be here? Yes."

The city convinced the company to install hubs deeper into neighborhoods and to remove the rack at ECHO, where most of the waterfront traffic originated. It urged Bolt to create a slow zone along the bike path and waterfront where electric power can only reach 10 miles per hour. And it required that Bolt use geo-fencing technology to prevent the bikes from using electrical power north of the Winooski River, forcing riders who head up to the Colchester Causeway to instead pedal the 50-pound bikes manually.

Burlington officials had less success influencing pricing. At the request of bike shops, the city asked Bolt to consider a new fee structure that increases rates once people have used the bikes for an hour, on the basis that no hub-to-hub trip takes that long.

The company was open to the idea but said it did not currently have the necessary technology to make it happen, according to Goulding, the city official. Bolt's local contract now states that it must inform the city at least 60 days prior to renewal whether it will be implementing this feature — and if not, what efforts it undertook to make it a reality.

The concessions have not proven enough to win over local business owners. They note that the geo-fencing technology is ineffective so far: Sharp said he witnessed several of Greenride's bikes motoring along the causeway last week.

But the larger sticking point remains the bike-share's presence along the waterfront. The city has allowed Bolt to relocate its College Street hub to Penny Lane near the Burlington Harbor Marina, belly up to the bike path and a stone's throw from the lake. Several passersby stopped to check out the new rack last Thursday afternoon, though there were no takers during the two hours a Seven Days reporter was there.

The hub was removed the next day after the city requested that Bolt take it off-line until it fixed the geo-fencing issue. Chapin Spencer, Burlington's director of public works, told bike business owners in an email on Monday that the company expects to remedy the problem within the next few weeks, at which point the rack will return.

Sharp, the owner of Burlington Segway, said the bike-share will continue to draw customers from local shops as long as there's a hub west of Battery Street. He recalled speaking to several people at the Penny Lane hub earlier this month who said they were from out of town. He took a picture of them and emailed it to city officials.

"Unless you control Bolt and keep them out of our summer tourist market they will crush us like Walmart crushes all the small retailers wherever they go," he wrote.

Sharp has perhaps the most to lose from Bolt's presence, given that half of his business comes from e-bike rentals. But the fight has become somewhat personal, too.

A 68-year-old former attorney who is largely credited with creating the Burlington bike path, Sharp spent years lobbying for permission to begin leading Segway tours along the waterfront before he was finally granted a city permit in 2013. He expanded into e-bike rentals a few years later and ran the business out of a storefront on Pine Street until the pandemic forced him to retreat last summer.

Sharp now operates the business out of his garage; riders make reservations ahead of time and then pick up the bikes at his Colchester home, which is located a mile and a half from the Causeway.

He hopes to eventually reopen in Burlington and says a successful summer would go a long way toward helping him achieve that goal. He will, however, likely need to find a new location, since his old one has already been rented out.

The original print version of this article was headlined "Cycle Killer?"