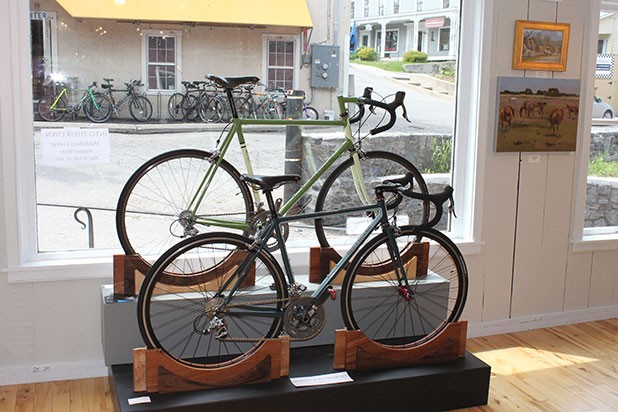 It’s a given for bikes to hang in the windows of bike shops. In art galleries, not so much. Increasingly, though, bikes are being viewed as works of art. They may not be in the realm of van Gogh or Gauguin, but cycles are indisputably works of industrial design.

At Middlebury’s Edgewater Gallery, curator Bay Jackson understands that. In the gallery’s new show “Into Their Own,” an exhibition of work by 19 Middlebury College alumni, two of the pieces are hand-built bikes crafted by Burlington frame maker Hubert d’Autremont. The custom road frames are displayed alongside visual-art media including pewter work by Fred Danforth, Jackson’s father and co-owner of Danforth Pewter. Jackson makes no artistic distinction between the bikes and more typical gallery fare.

“To me, it’s still a creative process, like a painting or a sculpture,” she says.

D’Autremont, a 2007 grad, began building bikes during his Middlebury days. Over the last year, the 25-year-old has established Cycles d’Autremont in Burlington, where he works with veteran frame builder Matt Penney.

One of d’Autremont’s goals as a frame builder is to help bring steel back into bicycle fabrication. When bike companies began using lighter materials such as aluminum and carbon in their products, steel fell out of fashion. But the industry has witnessed a revival of the material in recent years.

Part of the craft of hand-built steel bikes, d’Autremont says, is being able to marry the old with the new. While he builds steel frames and fabricates traditional lugs, d’Autremont’s bikes have a distinctly modern feel. That’s largely due to their contemporary components and slick paint jobs, which are done by Michael Caron at Burlington’s Downtown Paint & Spray. The more traditional of the two d’Autremont bikes at Edgewater is leaf green and butter yellow, while the more contemporary one is blue and red. D’Autremont acknowledges that handbuilt bikes, despite the custom fabrication, are ultimately distinguished by the paint.

“How do you make it functional and beautiful at the same time? That’s where something like paint comes in,” he says.

D’Autremont’s bikes don’t come cheap; his two in this show are valued at $3000 and $2400. That’s pretty steep, but considering what we spend on cars, he reasons, it’s a cheap transportation alternative. Plus, his bikes reflect the true cost of labor. Like a lot of artists, d’Autremont is not getting rich from his craft.