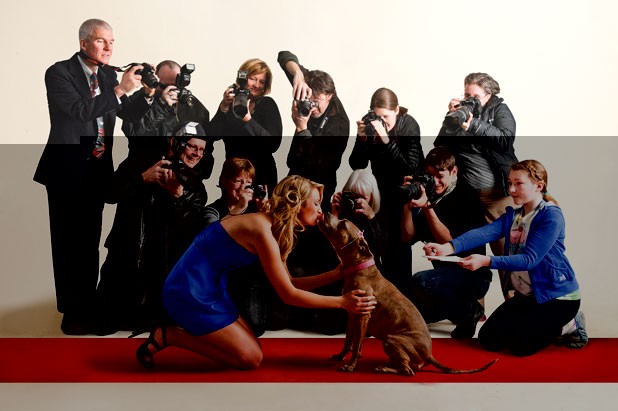 Pit bulls have a PR problem. At least, that’s what the Humane Society of Chittenden County is arguing in a new ad campaign designed to debunk what they say are myths about so-called “bully” breeds.

The ads feature pit bulls adopted from the Human Society posing with Miss Vermont USA Sarah Westbrook, lovingly playing with children and lounging with other dogs. The message? Pit bulls can play well with others.

Megan Stearns, Humane Society director of development and outreach, says pit bulls have been unfairly branded as aggressive and dangerous, owing mostly to their use as guard dogs and in illegal dogfights. That has made Vermonters reluctant to adopt them, she says.

Humane Society employees admit they bought into the pit bull stigma at one point, too, scrutinizing would-be owners of bully breeds more rigorously than people adopting other breeds. But that’s changing.

“I’ve met some really bite-y bichons,” says canine supervisor Robyn Santor, referring to small, fluffy bichon frises. The Humane Society evaluates a dog based on its “bite threshold” — whether a dog bites immediately when provoked — and its “bite inhibition,” which is how hard a dog bites down.

“That has nothing to do with the dog’s breed,” Santor says. “It’s all about that dog’s personality and tolerances and how they’ve been socialized.”

But some Vermont towns and cities have enacted ordinances that ban or strictly regulate pit bull ownership. Highgate prohibits residents from owning pit bulls. So does St. Albans Town, which singled out American Staffordshire terriers a decade ago in response to a perceived uptick in pit bull ownership among suspected drug dealers, according to animal control officer David McWilliams.

McWilliams says he prefers a case-by-case approach over sweeping bans when it comes to dealing with aggressive dogs. He notes that state law already gives town officials the power to investigate dog bites; officials have to hold a hearing after a complaint about so-called “vicious” dogs and can order a dog be muzzled, chained, confined or humanely put down.

But McWilliams acknowledges there are problem pit bulls. Two years ago in St. Albans City, a chained pit bull lunged through a car’s sunroof to attack two Pomeranians. The same dog also bit a jogger running down the street. In the end, the city council and manager ordered the dog to a local animal shelter, where it was later euthanized.

Town-wide pit bull bans are still pretty rare in Vermont. More common is what Stearns calls “rampant” pit bull discrimination. About once a month, she says, the humane society hears from a pit bull owner who has been turned down for a rental apartment. Some insurance companies charge pit bull owners higher premiums for homeowner policies or refuse to cover claims for bites inflicted by pit bulls, rottweilers or wolf hybrids. Farmers Insurance Group stopped covering those breeds in California earlier this year after a review of claims showed the three accounted for more than 25 percent of dog bite claims.

Colleen Lynn, of Austin, Texas, founded DogsBite.org after she was attacked by a leashed pit bull in Seattle in 2007. The dog crushed her arm and landed Lynn in the hospital. Lynn notes that through selective breeding, pit bulls have developed tremendous jaw strength and a “hold and shake” bite style; rather than bite and release, she says, pit bulls tend to “bite and hold on.”

Lynn hadn’t seen the humane society’s ad campaign until a reporter described it to her. Her reaction? It’s perpetuating misinformation. “Our perspective is that every pit bull is born with a dangerous tool kit, period,” says Lynn. Not every dog will go on to use those tools, but ignoring genetics is “killing people,” she says.

Proponents of breed-specific laws say that nationwide, pit bulls and pit bull mixes accounted for 62 percent of fatal and disfiguring dog attacks between 1982 and 2013, and that pit bull maulings are the most severe. But there’s no national system for tracking dog bites in the U.S., and pit bull advocates say there’s little evidence that banning the dogs results in fewer attacks.

In 2008, the Netherlands repealed its 15-year-old ban on pit bulls because there was no noticeable decrease in dog bites. The Toronto Humane Society reported a similar phenomenon five years after Ontario enacted a breed ban.

Two years ago, pit bull owner Jana Seitzer of Essex Junction adopted Alize, an American Staffordshire terrier, from the humane society. The dog has been great with the family’s four kids, Seitzer says, noting she believes a pit bull’s temperament has more to do with how it’s treated and trained than with DNA.

“My pit bull doesn’t go out and eat people for the sake of it,” she says jokingly.