Loaded With Cash and Poised to Expand, Beta Technologies Sees Clear Skies Ahead 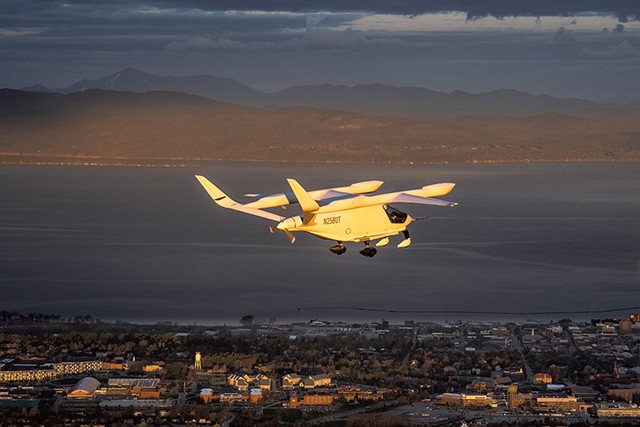 Beta Technologies has been raking in the dough. In May 2021, the South Burlington electric aircraft pioneer landed $368 million in venture capital from Amazon and others, putting the company into a class of its own among Vermont startups. Then Beta announced last week that it had secured another $375 million in financing from investors, including the Rise Fund and Fidelity.

The latest cash infusion capped a year full of highlights for Beta, which has gained national attention for its groundbreaking technology. Founded in 2017 as a quirky startup operating out of an aging hangar at Burlington International Airport, the company has transformed into an economic engine in Chittenden County, with more than 300 employees.

Its Alia prototypes have made significant advancements in flight testing, including trips as far as 205 nautical miles in fixed-wing mode, most recently to Manchester, N.H. Every week brings the company more media coverage, including an April feature in the New York Times. And Beta is poised to break ground this summer on a 40-acre manufacturing campus at BTV, following a brief dustup with South Burlington's zoning board that was resolved this week when the board issued a zoning permit for a revised version of the project.

"It turns out building an aerospace company is a lot like setting piles of money on fire." Blain Newton tweet this

The achievements have solidified Beta's position as a leader in the much-hyped electrical vertical takeoff and landing, or eVTOL, industry, which has attracted billions in investment for the long list of startups racing to turn electric flight into a commercial enterprise.

Beta's rapid ascent threatens to obscure the reality that its technology is not a sure bet. eVTOL companies don't yet have a product to sell, nor do they know the potential size of the market for their helicopter-like, battery-powered aircraft. But Beta has cleared the runway for its mission to find out.

The work has proved expensive, especially in the early going.

"It turns out building an aerospace company is a lot like setting piles of money on fire," Beta's chief operating officer, Blain Newton, quipped during a meeting with Vermont lawmakers earlier this year.

Crucially, though, the nearly $800 million that Beta has raised to date puts the company within the range that industry observers estimate is necessary to get an eVTOL certified by the Federal Aviation Administration — a milestone that Beta aims to hit in 2024.

Cecutta maintains a public dashboard that ranks eVTOL startups according to his firm's analysis of how likely they are to get their respective aircraft certified and manufactured at scale. Beta currently ranks third out of 25 companies listed in the firm's so-called "Reality Index," buoyed by its full-scale flying prototypes, its progress toward FAA certification and shovel-ready plans for manufacturing facilities. Alia's relatively large size, which makes it suitable for small cargo, means Beta's fortunes aren't pinned to the speculative "air taxi" market that many others are pursuing.

Some eVTOL startups are clients of Cecutta's firm, though he claims the rankings are independent. He wouldn't say whether Beta was one of them, citing nondisclosure agreements with all clients. Cecutta has visited Beta headquarters and left impressed with the company's approach.

"It's a good story coming from Vermont instead of Silicon Valley," he said.

Alia's progress has not come without some flak. Last May, North Carolina aerospace firm Blue Force Technologies sued Beta in federal court for breach of contract. In its complaint, which has not been previously reported, Blue Force accused Beta of relying on its expertise to design and produce the Alia prototypes, then violating the terms of its contract before terminating the agreement in May of 2021. Blue Force is seeking at least $259 million in damages.

Beta has denied the claims and countersued. The case is pending.

As Beta grows, company leaders have said they've seen benefits to expanding within Vermont. In a presentation to the Senate Transportation Committee in February, COO Newton claimed Beta had been tempted with "very rich incentive packages" to build its manufacturing facilities in Texas, North Carolina, New York, Québec and elsewhere.

Newton explained that the chief advantage to growing locally is speed. It's more efficient for engineers to work near the production line, Newton said. Plus, he continued, the company has connections here, including direct access to lawmakers and the governor's office.

"The level of support we've gotten to reduce friction on permitting and building things out and getting leases signed, because of the community and the size of the state and the ability to pick up the phone and call you folks, call the governor ... has allowed us to move incredibly rapidly," Newton said during the committee meeting.

Local and state governments have supported Beta financially, as well. Burlington International Airport has long provided Beta rent-free space for its headquarters. More recently, the company received job creation grants from the Vermont Employment Growth Incentive program that total up to $3.3 million, depending on how many jobs Beta creates.

The latest VEGI grant, which the Vermont Economic Progress Council approved in March, is tied to a battery production facility at the former Energizer plant in St. Albans, Vermont Public Radio reported. But Beta has yet to commit to the site.

"We are exploring locations that would allow us to continue expanding our business and growing new jobs in the state," company spokesperson Jake Goldman said.

The most direct competition is from across Lake Champlain, where Beta already leases three buildings at Plattsburgh International Airport in New York for its flight-testing program. The company uses about 90,000 square feet of space, airport director Chris Kreig said, up from 2,500 square feet during its earlier test phases.

Newton told Vermont lawmakers that Plattsburgh has encouraged the company to set up its battery plant at the airport, though Kreig would not confirm it.

The Energizer site is already outfitted for battery production in ways that would be costly for a company to build from scratch, according to Tim Smith, executive director of the Franklin County Industrial Development Corporation. Smith said he's optimistic that Beta will choose St. Albans, where he anticipates many locals would be happy to work for the company.

Nonetheless, the Town of Plattsburgh isn't shy about its desire to see Beta expand there. In an interview, Town Supervisor Michael Cashman touted the area's workforce and aerospace record and said its experience with other large industrial companies would make permitting new Beta facilities smooth and quick.

"A company like Beta would not see a lot of trouble going through the system," Cashman said.

Permitting for Beta's 344,000-square-foot manufacturing facility at BTV hasn't been a breeze — at least, not as breezy as the startup would have preferred.

Beta's site plan, which it first presented in draft form to South Burlington officials in spring 2021, ran afoul of city land-use regulations that prohibit new parking lots next to main roads. Beta's plan called for construction of a commercial building along Williston Road that would block the view of its parking lot, but that structure is slated for a later phase of development. Building the structure now would divert millions of dollars, Beta officials contended, and would delay the overall project.

Last month, after the South Burlington Development Review Board ruled that Beta's alternative plans didn't conform with zoning rules, politicians leaped to Beta's defense. Gov. Phil Scott and some local leaders said they worried that any regulatory delays could prompt the company to migrate to Plattsburgh. And the South Burlington City Council voted unanimously to change the city's zoning regulations to exempt airport-abutting projects from the parking requirement.

A month later, the project is back on track. The Burlington airport offered to set aside more than 200 of its existing parking spaces for Beta employees, which the company will access by using a shuttle. The deal allowed Beta to avoid the parking lot quandary by delaying its construction until later.

During a hearing on Monday night to reconsider the board's March decision, members of the Development Review Board lauded Beta's proposed solution.

"There's nothing like exigency to produce innovation," board member Frank Kochman told Beta's representatives. "I congratulate you."

Representatives for Beta, which says it has more than 200 contractors ready to break ground, implored the board to approve the company's revised plan quickly.

"Time is of the essence," Beta's Art Klugo said. "It is the most important thing for this project."

By Tuesday morning, Beta had its zoning permit in hand.