Living Room With a View

The Shelburne Museum "Modernizes" with a funky furniture show 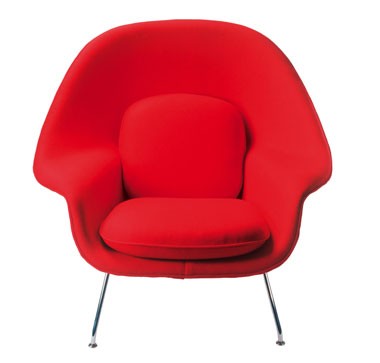 Think again. "Homey and Hip," a small but satisfying show of iconic pieces of Modernist furniture design, upends notions of what to expect from a visit to the venerable Shelburne.

The venue for the exhibit also stands in startling contrast to the museum's assemblage of 25 quaint or quirky buildings of mainly 19th-century vintage. The Kalkin House, where the show is installed, is conspicuously atypical on the grounds. A 2000-square-foot space, it was built to display folk art -- for which the museum is internationally known -- but is far better suited to its current role as temporary repository for tables and seating pieces once shockingly unorthodox in their shapes and materials.

New Jersey-based architect Adam Kalkin's creation consists of pre-fab industrial materials and giant cargo containers that have been converted into a second story. Colorful stage-style curtains tied to steel pillars make for a theatrical entrance to an austere but genial building that evokes as much wonderment as the display it houses. Its large, garage-style doors are pulled open on warm days, allowing visitors unobstructed views and scents of the museum's grassy, flowery grounds.

Shelburne patrons weary from walking the museum's 45 acres will welcome the chance to rest in this airy interior. And all summer long, they can take a load off in chairs and settees designed by a few of the most celebrated figures in the American Modernist movement. Knoll, Inc., a pre-eminent American furniture design and manufacturing company, lent the Shelburne about 20 of its mid-20th-century masterworks with the stipulation that those looking at them would also be able to sit on them. Because of its butts-on policy, "Homey and Hip" differs delightfully from the standard keep-your-distance museum experience.

Although it's not an extensive survey, the show does feature pieces emblematic of the high-style, residential look of the past half-century. It also demonstrates how an era's most profound events affect its aesthetic expressions -- right down to the look of a living room.

First up is a four-part ensemble from the early 1940s. The biomorphic coffee table and pair of maple-framed chairs with nylon and cotton strapping were designed by Jens Risom, a Danish emigre who was one of Knoll's original stars. Risom worked in the romantic Scandinavian vein that ran thickly through the early phase of Modernist furniture design.

The accompanying settee, composed of a series of tufted rectangles, is by Florence Knoll, widow of the firm's co-founder, Hans Knoll. The couple fled Nazi Germany and established their pioneering furniture firm in New York in 1938. Florence Knoll's piece represents a decisive departure from the style favored by Risom, whose table and chairs had been produced two years earlier.

Knoll studied in Chicago with Mies van der Rohe, the superstar of Internationalist architecture, and with Walter Gropius, leader of Weimar Germany's influential Bauhaus school of applied arts. Knoll took to the functionalist, pared-down aesthetic developed by the German architects and designers. And she ensured that Knoll, Inc., would henceforth be identified with this non-ornamental, reductivist form of furniture.

Today, however, it's Risom's chairs that hold the greater appeal in this grouping. Their construction is both simple and supple. And it's here, right at the start of the show, that history's impact on Modern design becomes evident.

World War II determined the types of material used in several of the pieces in "Homey and Hip." Risom's chairs, for example, were originally made with parachute straps discarded by the U.S. Air Force. Synthetic and natural fibers alike were being largely diverted to the war effort.

A set of chairs designed by Harry Bertoia also embody the influence of the seminal event of the mid-20th century. Bertoia, an immigrant from Italy, relied on the human hand to bend strips of metal into a diamond shape that curator Rogers describes as "more air than chair." The chair's rigid form gives the impression that Bertoia was devoted more to his artistic vision than to his clients' comfort. But sitting on these pieces actually produces pleasure, not pain. And that's because Bertoia applied the principles he learned from devising ergonomic designs for the cockpits of U.S. warplanes.

A dining table by Japanese-American sculptor Isamu Noguchi was commissioned by Knoll, Inc., in 1954 as a complementary centerpiece for Bertoia's chairs, designed two years earlier. The Formica top of Noguchi's circular table is supported by chrome-plated steel struts affixed to a heavy iron base.

The piece presents an interesting case study in how an artistic concept can evolve in unexpected directions. Noguchi was originally inspired by the look of an African stool to which he added a rocking capability. Hans Knoll then asked Noguchi to convert the design into a child's table, which in turn served as the basis for the "Cyclone" piece on display at the Shelburne.

The show's focal point is a trio of bentwood chairs designed in 1991 by Frank Gehry, who probably qualifies as the most innovative American architect of the past 20 years. Gehry's pale maple pieces consist of thin layered wood strips curled into continuous lines and joined by industrial-strength adhesive rather than nails or screws. The chairs' intricate construction has a woven quality that will appeal to visitors' eyes while soothing their backs and bottoms.

Gehry, who grew up in Toronto, has playfully employed hockey terms in titling each of the chairs. One, aptly christened "Cross Checking," sits beside the "High Sticking" side chair and the "Power Play" armchair, which, to Rogers, resembles a goalie in its squatness.

Gehry's pieces are unfortunately positioned in front of a roughly 20-foot-long, chrome-grey, sink-and-stovetop combination that dominates the exhibition space, even though it has nothing to do with the show itself. The fixture is a leftover from the original notion of presenting Kalkin's building as the contemporary-style residence of a collector of folk art. If the interior did not contain the objects that make up "Homey and Hip," the kitchen fixture would appear appropriate. In the midst of all this groundbreaking design, however, it looks utterly out of place and will surely cause visual confusion on the part of visitors.

The show's finale features an identical pair of easy chairs and an oval, marble-topped pedestal table designed by Eero Saarinen. The seating pieces, produced in the mid-1950s, are the first in the world to be fabricated from fiberglass. Their swooping lines call to mind the St. Louis Gateway Arch and the TWA terminal at New York's Kennedy Airport that made Saarinen a hero of Modern architecture. As the "Womb Chair" title suggests, visitors are meant to curl up in these pieces, which include built-in foot rests.

"Homey and Hip" is the first show assembled by Kory Rogers, a 28-year-old Oklahoma native who became curator of exhibitions in September after a two-year stint as an intern. It's an

apt as well as auspicious debut. Rogers concentrated on mid-20th-century design while studying for his graduate degree at the Smithsonian-Parsons School in Washington. He is planning a series of shows in the Kalkin House that will highlight the work of designers from his own generation.

This theme should lend freshness to an institution that many twenty- and thirtysomething Vermonters probably associate with dusty old relics. Under the museum's new director Stephan Jost, 37, the Shelburne appears determined to take on a cooler image in hopes of attracting younger audiences. With "Homey and Hip," the makeover is off to a promising start.