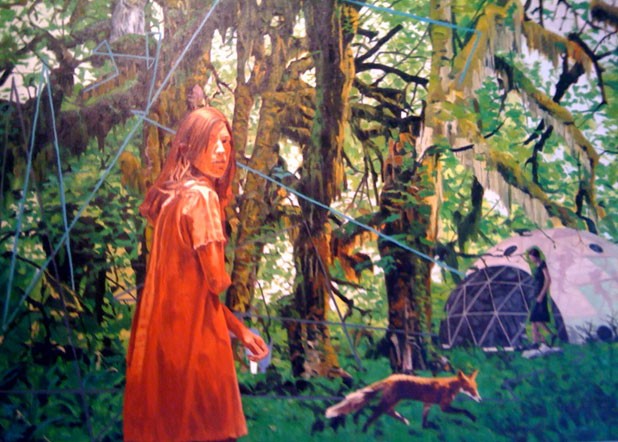 For all its ambitious breadth, with artworks on four floors of Burlington’s Firehouse Gallery and sites beyond, “Human = Landscape” finds its strength in individual artworks of particular resonance. That’s because, as a whole, the exhibit does not fully answer the questions it poses: “How might an energy-sustainable, rural landscape of the future look? What defines a landscape as ‘beautiful’ or ‘ugly’? How have notions of natural beauty changed over time?”

Put another way, the thematic exhibition is not entirely cohesive as a “forest,” but some of the “trees” are extraordinary specimens.

To be sure, there are some pragmatic responses here, such as Guy Powers’ “Anaerobic Digester,” which converts cow poop into electricity while also producing fertilizer and trapping harmful gases. Powers is the chief science officer of South Burlington’s Avatar Energy. There is architect Arthur Chukhman’s proposal for the Burlington Waterfront that addresses the pressing issues of waste management and energy production in a very attractive way. Another architect, Ted Montgomery, presents a housing design, dubbed the “Hale Hibiscus Project,” for tropical and subtropical climates that uses solely renewable resources.

The majority of participants, though, are visual artists, and their contributions to “Human = Landscape” aim not to provide solutions but to shift our thinking. This second half of the review, continued from last week, highlights a few of them.

A landscape generally looks best when humans haven’t messed with it, or at least have lived on it gently. Interestingly, the Firehouse exhibit’s most traditional depiction of landscape — Gary Hall’s murkily evocative black-and-white nature photographs — resides in the basement. Granted, that’s where the Firehouse darkroom is located, but one wonders whether Hall’s pristine images were sited here to ground “Human = Landscape” in the idealized past, not just of the land but of art history, as well.

One can’t help observing, too, that Hall’s photographs and Alex Maclean’s aerial shots of egregious housing developments, on the fourth floor, “sandwich” the exhibit between them. Presumably curator Chris Thompson hoped viewers would connect the dots. It’s a familiar and well-documented path, but he offers plenty of interesting detours along the way.

It’s impossible to ignore Ethan Bond-Watts’ oversized mobile, “Solaneme,” on the first floor. At the center of the 18-foot-wide and 9-foot-high construction dangle 70 hand-blown glass pieces — elongated swoops and amorphous blobs — in complementary hues of orange and blue. Overhead and circling this “vortex” are four bent-wood “blades” ending in curvy, molded-linen “paddles.” These turn steadily, put into motion by a nearby fan, which in turn is powered by nonsustainable electricity. “Solaneme” is impressive in scale and execution, but it’s hard to grasp Bond-Watts’ lofty concept without listening to the audio guide.

“Valvoline,” an installation by R. Elliott Katz, is less subtle but equally well crafted in an entirely different medium. It consists of 36 plaster-cast motor-oil containers, neatly lined up on a shelf as if in an auto-supply store; each cream-colored bottle contains an exquisitely carved image of a political figure (e.g., Hugo Chavez) or pop-culture icon (Peter Fonda from Easy Rider) germane to the human history of oil consumption. An imaginative and unique take on the subject, Katz’s work is quietly stunning.

Viewers to the Firehouse exhibit should not overlook the provocative paintings on the second floor. Jean-Pierre Roy and Christopher Mir share a space and, to some extent, an aesthetic that has variously been called “sci fi” and “mythic.” Roy’s unpeopled canvases suggest a post-apocalyptic future, though his subject matter is intriguingly ambiguous. His 40-by-30-inch “Geometry for the Post Divine” depicts what might be a power generator, in the iconic shape of a nuclear reactor tower but illuminated from within. Clouds of steam swirl about its exterior, while a central axis composed of Roy’s signature translucent, colored bubbles energizes the painting itself.

Mir’s work tilts toward the mythical, if not magical, and the futuristic at the same time. In the 40-by-54-inch oil “Dome Home,” a young woman painted in shades of red walks in the foreground and peers placidly over her shoulder at the viewer. In the wooded background, another woman stands before the titular dome. A red fox slinks between the two, while laser rays bounce hither and yon across the picture plane, connecting items or simply random points in space. In Mir’s “Birthday Doomsday,” a young girl wrapped in a blanket wanders through the woods as lighted objects — fireflies? tiny UFOs? — hover overhead. She’s oblivious to what looks like the innards of a bomb near her feet, with the numbers “081370” ominously displayed in orange.

Neither of these painters points the way to an “energy-sustainable, rural landscape.” But they are two of the many artists in “Human = Landscape” who give us something to think about, even if that something is the sustenance of art itself. In that regard, the future looks renewable indeed.