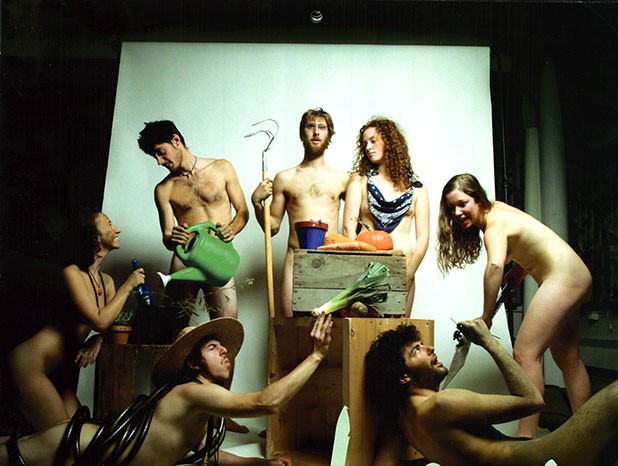 The nude calendar phenomenon in Vermont can be traced back to one enterprising and unabashed group of men from Calais. In 2002, the average Joes of Maple Corner dropped trou to raise money for their community center. They called it quits after two calendars and $500,000 in sales and in doing so passed the nekkid torch.

In 2009, the town of Shoreham stripped down for a nude calendar to benefit its local library. The townsfolk raised a bundle as well, which is not surprising considering the novelty of everyday people posing in their birthday suits.

This year, University of Vermont students are carrying the full-monty baton by shedding their clothes to raise money for campus clubs. Think “implied” nudie shots of the UVM Ultimate Frisbee team, the Salsa and Swing Society and the campus feminists in action.

The Prudent Student calendar is the brainchild of UVM grads Jamie Seiffer and Evan Walden. The calendar concept took off last year when the pair, then seniors, wanted to find a way for fellow students participating in campus clubs to make money for their organizations. They batted around a few ideas, but the only one that stuck was the nude calendar. It was bound to make more money than a bake sale and be more fun than a car wash, they reasoned.

With the help of some other students, Seiffer and Walden began planning the calendar. The lack of any experience shooting nude pictures did not deter them. Predictably, it was not that hard to find students willing to take it all off for the camera. Interest was so great among the student clubs that the pair had to turn groups away.

While finding willing models may not have been difficult, setting up the shots so the college administration didn’t freak out was another thing. That’s where photographer Bobby Bruderle came in. Bruderle, now a junior at UVM, was charged with blocking all the shots so no one’s “junks” were hanging out, as Seiffer puts it. The end result was a slightly silly, moderately provocative and artistically smart calendar that illustrates what each club is about, albeit sans clothing.

The January spread features the taut members of the UVM outing club in the buff. Climbing harnesses and axes obscure the men’s bits, while climbing rope and scarves hide the women’s. Members of the college’s gardening club serve as models for August. Watering cans, boxes of produce and strategically placed neckerchiefs conceal their unmentionable areas. Seiffer even joins the action when he poses with FeelGood, the nonprofit student-run deli.

Bruderle’s strategy for getting the perfect shot had the students stripping down to their skivvies while he organized the photo. Once they were in the right poses, Bruderle had them get naked for a few quick pics. During the shoot, he had to make sure no one exposed him- or herself. That meant asking folks to move their props to avoid nip slips or worse. Seiffer recalls having to make a few adjustments during the shoot. “Bobby was, like, Jamie, put the cutting board forward. I can see your junks,” he says.

This year’s calendars will sell for $10 and become available sometime in early November. Seiffer hasn’t yet picked the groups that will appear in the 2010 calendar, but says 30 clubs have applied to be photographed. Not only does the calendar provide the student clubs with much-needed income, but it also makes their fellow students aware of their existence.

“Our mission is to provide student groups with a chance to expose themselves to campus,” Seiffer quips.