Strip and steak are cheap at Montréal's Club Super Sexe 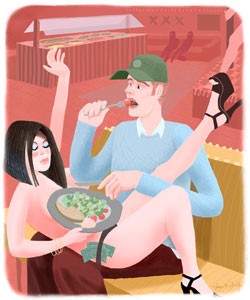 The sign was unmistakable. The giant neon arc featuring bikini- and cape-clad ladies around the words “Club Super Sexe” reminds many Vermonters of their first foray into the world of across-the-border nudie bars. I was just there for the food.

Club Super Sexe, one of Montréal’s best-known strip clubs, offers a free buffet every weekday from 11:30 a.m. to 3 p.m. As I walked up the cold, graffiti-covered stairwell off rue Ste-Catherine, the musty, bathroom-like smell was less than appetizing. But I’m a Serious Journalist, willing to brave the most rank food, and saggiest boobs, for a story. The food, at least, proved a pleasant surprise.

An older man who resembled a more hirsute Danny DeVito was working the door. He carded me and my boyfriend/bodyguard-for-the-day, James. He looked at us, examined our driver’s licenses and exclaimed, “Mama mia!” Bewildered by the non sequitur, we paid him $5 apiece and sheepishly followed him to a small, round table near the stage.

Just as we sat down, a slim Asian woman slowly shed her red dress several feet away, illuminated by blinking, multicolored lights. Under the dress, she was nude. The stripper languidly ran her hand along the suspended bar surrounding the stage, making a dead-eyed circuit like a fish in an aquarium.

A petite, dark-haired waitress quickly arrived to help us. She was conservatively dressed in a high-collared black T-shirt and jeans. Heavy-looking implants were the only hint that she may have aspired to the stage. I asked for water, James a Diet Coke. Our server looked down, seeming embarrassed. “That will be $8 for each,” she said.

While our waitress searched for nonalcoholic beverages, we walked past the VIP room and another stage, darkened and empty at 1 p.m., toward the buffet.

It was the only lit area in the cavernous room, other than the dim stage. An old TV hung on the wall, flickering images from a darts competition. A sign welcoming “fans de hockey” was posted above the salads. In the corner between the hot and cold bars was a vase filled with imitation daisies and black-eyed Susans.

The cold dishes included an array of salads — pasta, crab and iceberg lettuce among them. There were more hot dishes, including three kinds of meat. Some vegetables were pale and a few meats appeared slightly dry, but otherwise things were more promising than the petrified Jell-O and potato salad I had expected. A man who appeared to be of Middle Eastern descent stood by a carving table, ready to slice roast beef, which sat in a pool of jus and roasted roots.

I filled my plate and returned to our table while James continued to examine the selections. As soon as I sat down, the waitress demanded that I pay for our bottle of water and can of soda. I then started my meal with an herb-coated, medium-thick, bone-in pork chop.

As I took my first bite, the Asian stripper, now back in her red dress, placed herself directly in my line of sight. She motioned as though she were about to sit in James’ seat, then approached one of the three other occupied tables. “Hi, welcome to Super Sexe,” she said to the group of slightly post-college-age dudes and grabbed a seat. Though the men working at the club all had thick French accents, most of the women seemed to be Anglophones.

I didn’t notice what followed, as I was shocked by the meat in my mouth. The pork had looked dry. But, while not exactly juicy, the chop was surprisingly tender, marinated in a mix of lemon, garlic and oregano that I generally associate with souvlaki. A hint of tarragon added a licorice note. This was actually good.

The club’s DJ announced the next dancer. In his thick Québecois accent, it sounded like he said the woman was “young, hung and dangerously sexy.” The blonde was clearly all natural. Only her flat chest reassured me that her bulging belly did not indicate pregnancy. Her loose posterior resembled a bookshelf filled with cottage cheese. When she dropped her white G-string, it was clear that she was not, after all, “hung.”

The lasagna didn’t exactly turn me on, but, as with the pork chop, I was pleasantly surprised by its sophistication. With layers of both tomato and something resembling béchamel sauce, the nicely browned pasta dish was fairly authentic lasagna Bolognese. The meat sauce was lightly speckled with red pepper flakes, lending a bit of heat to the creamy, cheesy casserole.

I was less impressed with the penne in pesto. Though I assumed the lasagna’s tomato sauce was canned, the pesto had the telltale metallic taste of a mass-marketed basil purée. On the plus side, the pasta itself was al dente, a rare feat even at restaurants that don’t feature naked women as entertainment.

As the blond stripper picked up her clothing, the DJ reminded guests, “If you can’t make it for noon, join us for supper. We have a variety of goodies at the buffet.” He doesn’t mention that the buffet isn’t free at dinnertime.

White Zombie’s “More Human Than Human” played as I cut into a baked chicken leg and thigh. Meanwhile, the next act shed her sparkling, cheetah-print hooded coat to reveal a small, bare chest and shaved crotch, the latter of which was nearly covered by a layer of abdominal fat. Apparently the day shift at a strip club doesn’t attract the front lines among the “talent,” but I continued to be impressed by the chef. The chicken was slightly dry, but the skin was crisp and rubbed with a salty, piquant spice mix.

I returned to the buffet for plate number two. The chef — and only worker in the large kitchen visible from the buffet — was wearing a Manchester United jersey. He left the kitchen to carve me two slices of slightly pink roast beef. I tried to overlook the greasy pool in which they sat and scooped up some roasted veggies, then grabbed some cold dishes and returned to the table.

The carrots and parsnips were deliciously caramelized. The beef was less successful. Though it had a nice texture, the meat had soaked up an oddly vegetal, chemical flavor.

If the food was on a downhill slope, the entertainment was improving. The DJ had introduced Isis, pronounced in French as “Ees-ees.” The small, coltish performer was the first to take proper advantage of the pole. With long, flowing brown hair and wearing a gray, striped bikini, Isis rolled herself into a pretzel-like configuration and spun around the pole upside down to the pounding soundtrack of Depeche Mode’s “Enjoy the Silence.”

This woman was a talent. She teasingly showed her nipples but left her bikini on while she performed more stunts on the pole. Once she had stripped down entirely, with Radiohead’s Thom Yorke, solo, on the sound system, she did another upside-down spin — and landed in a split. Ouch.

I was impressed, but when Isis put her bikini back on and approached an older man sitting alone, he quickly rebuffed her. “I’m just waiting for my drink,” he said, shooing her away.

The pasta salad, in something that resembled creamy Italian dressing, was nicely al dente and sweetened by fresh red peppers, but was it good enough to bring in someone disinterested in the entertainment?

Clearly, the food was prepared with some skill. Even the pallid slices of tomato were made delicious with the addition of Greek spices and crumbles of feta. Surely no one would answer me honestly, but I wondered aloud, do any regulars at Club Super Sexe come just for the pig-outs? James quickly enacted my fantasy, miming lowering his face toward his plate and exclaiming, “Laissez-moi seul! Je mange!”

That said, practically none of the other customers appeared to be taking advantage of the buffet when we were there. Many who showed up alone paid DeVito — who was monitoring screens of security footage — and led the girl of their choice to the “Section VIP.”

Done with my food, I went to the ladies’ room. It turned out the only toilets for girls at Club Super Sexe were in the strippers’ dressing room. A vending machine selling tampons and baby wipes was affixed to one wall. Tiny, dirty-looking lockers were against another. The danseuses had laid their winter coats and boots against a few torn, plastic chairs facing the sink. Near a battered pay phone and yellowing phone book, a sign proclaimed, in French and English, “No narcotics allowed.”

A pair of clear, five-inch stilettos was visible under the wall of the stall next to me. I exited to wash my hands. The black-haired stripper who emerged was surprised to see me. She had just finished her set and was wearing only the heels and a pair of high-waisted black panties. “Please excuse my nakedness,” she bid me in a French accent, lightly covering herself. I wanted to say something snarky about already being in a strip club, but her tone was so endearingly vulnerable, I just asked her for help working the stubborn sink.

I returned to my table as my new friend, once again wearing her bra, took the stage. After some slow dancing, the music heated up, and she counted to three before dropping the top. The spectacle had by now become as routine to me as seeing another woman in the locker room. All the same, at a total of $26 Canadian for two people, Club Super Sexe was certainly a great value. Next time I’m looking for all-you-can-eat lunch and a show, I just may return.