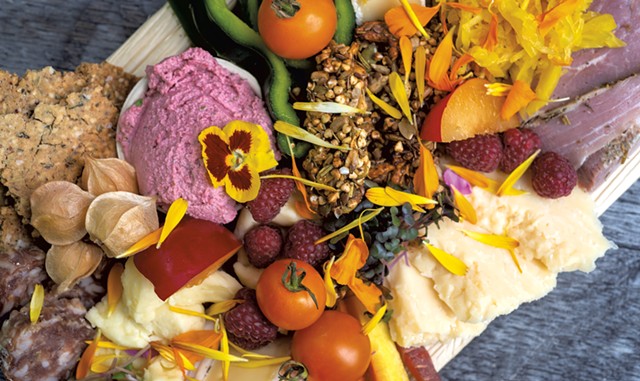 Prepping last week for a dinner service, Haley Blair collected water from a spring at Smugglers' Notch. Blair, owner of Live Forever Foods, and her coworker bottled 10 gallons of mountain water in the morning and served it the same evening to guests at a pop-up at Cork Restaurant & Natural Wine Shop in Stowe.

The event at Cork was a first for Blair, who typically operates Live Forever Foods from a food truck at Stowe Cider. But she's a regular at the Smugglers' Notch spring, where she gets drinking water for herself and her dog, Penelope.

"That's how we stay so strong," Blair said.

Blair, 29, takes sourcing seriously. The ingredients for the Stowe dinner, which featured a cheese board and pasta stuffed with squash and leeks, came from more than a dozen local farmers and producers. Some are well known, such as the Cellars at Jasper Hill, a cheesemaker in Greensboro. Others are smaller, including Mud City Farm in Morrisville, which grew the koginut squash and leeks for the agnolotti.

"You'll never see a Sysco truck anywhere near me." Haley Blair tweet this

Blair founded Live Forever Foods as a vegan, seasonal farmers market business four years ago, with no previous professional cooking experience, and now runs the food truck and hosts the occasional pop-up. Her conscientious sourcing of every ingredient necessary to make a meal — including nuts, oils, grains and sweeteners — sets her apart from many Vermont restaurateurs, Blair said. If her ingredients aren't locally sourced, they're organic and unrefined, she noted.

Her preference for unprocessed, seasonal and local ingredients dates back at least a decade. Living in a dorm at the University of Vermont, Blair said, she avoided eating in the cafeteria, opting instead to shop at City Market, Onion River Co-op and make meals in a Crock-Pot.

Before founding Live Forever Foods, Blair taught first and second grade at Shelburne Community School, where she saw many food-insecure children, she said. Teaching these young students whose primary needs for nourishment weren't being met inspired her to turn her attention from the classroom to the kitchen.

"That's where I started to see the injustice of our food system rear its head," she said.

Her favorite projects at school were food related, such as making and eating falafel, kale salad and tzatziki with her students. The lessons were fun and healthful, Blair said, but they also helped her students "learn the habits of how to be [healthy] in this world."

In 2018, Blair retooled Live Forever Foods from a farmers market vendor into a vegan prepared-foods and delivery service. Working from a rented commercial kitchen, Blair and her crew prepared a weekly menu of nut butters, salads, soups, dips, salad dressing and veggie burgers. People placed their orders online for Friday deliveries to 15 locations in Vermont; the food reached about 100 people a week, according to Blair.

In early August of this year, aiming to become "more rooted in our community," she said, and to interact with people eating her creations, Blair changed her business model again, switching from delivery to on-site service from the truck.

The red food truck is open every day in the parking lot at Stowe Cider on Town Farm Lane, with offerings that now include dairy and meat. A menu of cheese plates, charcuterie, hummus, veggie-packed grain bowls and wraps, pickled vegetables, sweet and savory waffles, and sandwiches pairs well with a glass of cider or a beer. The food tastes bright and looks beautiful.

Seasonality is a prime menu driver: In late August, during Vermont's brief peach season, Blair served a grilled goat cheese and peach sandwich with basil and drizzled honey on Red Hen Baking bread. It was garnished with dressed greens and calendula — an edible flower.

"Flowers are a food group," Blair said with a laugh.

Live Forever Foods sources ingredients from 30 or so local farms and producers, according to Blair. It's not a convenient way to operate a business, she said, "but it's the choice we make."

"I wouldn't have a food business if I wasn't going to go all the way," Blair said, sitting outside the cidery on one of the last days of summer. "Feeding people is a sacred act. It's an honor to care for you. I'm going to do the right thing."

Kari Anderson, 37, is the owner of Mud City Farm and a Live Forever Foods regular. She tries to make her deliveries at lunchtime so she can eat at the food truck.

"She's got me covered," Anderson said of Blair. "She takes care of her farmers."

Anderson said Blair will sometimes help out in the field when she comes to pick up produce and works closely with the farmer on crop availability and menu planning.

Noting the fresh and unique flavor combinations of Blair's dishes, she said she admires her ability to "pull a ton of flavor out of very simple ingredients."

"She has really interesting combinations. It's so rich," Anderson said. "You don't even know what it is. And when you ask, the base is sunflower nuts."

In a month or two, when it becomes too cold for Blair to run her food truck, she hopes to serve food inside a local establishment. One possibility is a partnership with Stowe Cider. But there are logistical challenges, including a construction project to build out the kitchen, said Mark Ray, the cidery's principal owner.

He estimated that, since Live Forever Foods opened its food truck adjacent to Stowe Cider, at least 60 percent of his customers have purchased Blair's food.

"It's very impressive what they're doing," Ray said. "It's really nice; they're producing high-quality local foods."

His top priority is producing cider and running a taproom, which makes Live Forever Foods a nice match, Ray noted.

"People should be eating when they're drinking," he said.

As Blair thinks about the future of her business, how she plans that future is important to her. She's learned to be patient and not to make decisions "out of fear or forcefulness," she said.

Blair maintains a spiritual practice that involves going into the woods several times a week to her "prayer spot" in Stowe's Nebraska Valley, bringing along a deerskin drum she made. The peacefulness of the setting and the steady rhythm of the percussion instrument "keep me coherent and clear on my mission and my vision," Blair said. "It allows me to make choices from a grounded, centered place."

Beyond wanting to work in an indoor kitchen this winter, she'd like to use profits from her business to subsidize the creation, production and distribution of a healthy breakfast bar.

This grab-and-go item would connect back to her work with kids and the factors that compelled her to leave the classroom for the kitchen. She'd make her bar with Vermont apples and carrots and sweeten it with maple syrup.

"If I have one goal before I die," Blair said, "it's to get Pop-Tarts out of kids' bodies."