Listless in the Legislature: Why Has the 2017 Session Been So Sleepy? | Politics | Seven Days | Vermont's Independent Voice

Listless in the Legislature: Why Has the 2017 Session Been So Sleepy? 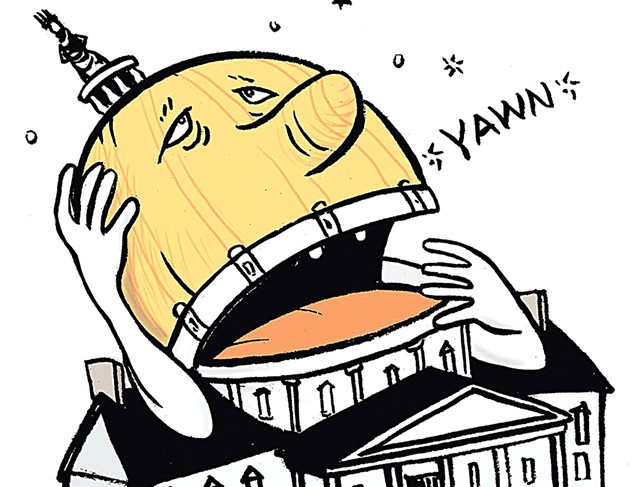 A tri-partisan group of lawmakers lingered last week at a table in the Statehouse cafeteria as the noon hour waned. Democrat Dylan Giambatista of Essex Junction, Progressive Robin Chesnut-Tangerman of Middletown Springs and Republican Kurt Wright of Burlington had finished lunch, but they were in no hurry to head into the House chamber for the day's floor debate. They didn't risk missing much. The most contentious legislation that day was "an act relating to aquatic nuisance species control."

Asked to summarize the 2017 session in one word, each only needed a moment.

The session isn't over — a disproportionate share of the drama can unfold during its final weeks — but Statehouse regulars are already calling this an unusually sedate year, devoid of trailblazing legislation.

Neither the new Republican governor nor the fresh slate of Democratic legislative leaders will have major accomplishments to show for themselves. From the start, lawmakers declined to finance a long-term cleanup plan for the state's rivers and lakes, raise the minimum wage, or adopt an education funding proposal from Gov. Phil Scott. Other high-profile initiatives — including family leave and marijuana legalization — faltered later on.

"A boring year, for sure," said Vince Illuzzi, a senator-turned-lobbyist who's spent 36 years in the Statehouse.

One key reason: The new governor has preached fiscal restraint — but not much else.

Lobbyist and former state rep Patti Komline describes Scott as a "put-your-foot-on-the-brakes kind of guy" with a no-new-taxes mantra that constrained the legislature. "Without the money to spend here, there's not as much activity," she said.

"He called a time-out, and everybody recognized we needed that," Komline continued, alluding to the tenure of Scott's predecessor, Peter Shumlin, whom she called a "step-on-the-gas kind of guy." The Democrat's comparatively activist agenda included an unsuccessful attempt to establish single-payer health care reform.

Veteran lobbyist Kevin Ellis joined Komline at a table in the cafeteria, the default haunt for Statehouse lobbyists and loiterers. "If that [gubernatorial] election had been a cliff-hanger, it would have been different here," he agreed. "The Democrats would have been emboldened."

Sitting across the room, Rep. Wright said he's witnessed the Scott effect firsthand in the House Ways and Means Committee.

"I can tell you point-blank that our committee chair ... has said to us a number of times, 'We're not looking at things that have increased taxes and fees because ... they're going to face a gubernatorial veto.'" For example, the tax committee threw out a water-cleanup proposal from the Natural Resources, Fish and Wildlife Committee that would have cost $31 million.

While Scott may very well secure his time-out on taxes, he's been hamstrung in other Statehouse endeavors. Democrats rejected his boldest proposal — to freeze school spending and redirect money to childcare and higher ed — a plan they claimed would inadvertently increase property taxes. They also rebuffed his attempts to combine the state's liquor control and lottery offices and to merge the departments of labor and commerce.

To mark Scott's 100th day in office last week, his press secretary distributed a document that listed the governor's 75 "efforts" so far — a necessary label given that a number of items were in legislative purgatory. One of the achievements the governor is touting: The Department of Taxes has found a way to process paper returns faster.

Scott has gently chided the legislature for dismissing his plans. When the House declined to combine the state's liquor and lottery operations, he accused it of choosing to "embrace the status quo."

House Speaker Mitzi Johnson (D-South Hero) and Senate President Pro Tempore Tim Ashe (D/P-Chittenden) have, in turn, been tactfully critical of Scott's administration, hinting that some of its members have hampered progress in the Statehouse.

"When the administration doesn't have the information or doesn't have the people hired, or if they're hired and not allowed to talk to us, it does hinder what a citizen legislature is able to do," said Johnson. She noted that the top position at the Department of Environmental Conservation was "vacant for months when water quality was something that was incredibly important."

"It just makes it more difficult when you don't have a dance partner," Johnson said.

Scott can't be blamed for all the inaction, however. An all-new cast of Democratic leaders took control of the Statehouse, and its performance hasn't always been up to snuff.

"I think that the speaker has, at times, clearly not been able to deliver. For example, on the pot bill," said Wright. "That had to be sent back to another committee fairly unceremoniously and surprisingly."

From the beginning, Johnson vested power in her committee chairs rather than impose an agenda of her own, and decentralized decision making sometimes led to disorder. This was most apparent when Johnson abruptly pulled from the floor the marijuana legalization bill developed by the House Judiciary Committee because she lacked the votes to pass it.

Johnson defends her approach. "I feel like this is a session of fine-tuning and making sure that we're making government work well," she said. "Given the federal uncertainly, given the newness of legislative leadership ... it's not the time for big, transformative, cutting edge [legislation]. It's really a time for continuous improvement."

"It's not the time for big, transformative, cutting edge [Legislation]." House Speaker Mitzi Johnson tweet this

According to Democrats, it's their concern about President Trump's plans — not Gov. Scott's veto pen — that has suppressed the legislature's appetite for spending.

"I don't think it's fair to characterize the fiscal restraint message coming out of the governor's office as the reason," said Giambatista. "I actually think it has everything to do with the federal leadership."

He outlined the prevailing argument among Democrats: They are reluctant to spend more now because they may need to raise revenue later if Trump and the Republican-controlled Congress slash aid to the states.

Even Progressives, who are most inclined to agitate for bold new policies, seem content to wait it out. "Looking at revamping the tax code or looking at different funding sources for education — I mean, those all kind of fall by the wayside when it's an unknown what's gonna happen in Washington and whether a third of our budget is at risk," said Chesnut-Tangerman.

According to Johnson, one of the House's central accomplishments has been to "insulate" Vermonters from Trump's threats by passing legislation to ensure transgender people have access to gender-neutral bathrooms, creating a racial justice oversight board, strengthening impartial policing and putting federal energy-efficiency standards into state law.

The Senate pursued a modest agenda as well, despite Ashe's opening pledge that the body would "not and cannot be a thumb-twiddlers' club."

During an interview last week, Ashe said the session "won't go down as one with major revolutionary policy changes, and sometimes that's just fine."

He maintained that the Senate would adjourn with a number of understated accomplishments, including legislation to support juvenile offenders, a plan to increase pay for mental health workers and the creation of an ethics commission.

"I think there's been a bit of a subdued atmosphere in the sense that we know that there's a lot of volatility in Washington," Ashe said. He offered the example of finding a permanent way to pay for lake and river cleanup, which he described as "an area where we're a little bit handcuffed at the moment."

"There are really two reasons why a long-term strategy won't be acted on this year. First, we have a new administration that hadn't clearly articulated what it wants to do about this problem," Ashe said of Team Scott. "The second is a substantial percentage of the money that we're counting on are federal funds" that are in jeopardy.

The lack of action can be infuriating for activists. James Ehlers, executive director of Lake Champlain International, called the legislature's failure to find a funding mechanism for water-quality protection "horrendous."

Even Ellis, who said he rejects the notion "that in order to have a successful session, you have to do something," acknowledged that the state's pols will need more to show for themselves next year.

"I think the legislature did what the governor asked, and that's why nothing happened," he said. "The question now is, now that the governor has accomplished that goal ... now what?"

Rep. Heidi Scheuermann (R-Stowe), a Scott supporter, predicts that the second half of the two-year biennium will be more action-packed as Democrats make renewed efforts to raise the minimum wage and mandate paid family leave. "It's an election year ... and, by then, people will have gotten to know each other in these different roles. I think people will want to really show that they succeeded in advancing their priorities," she said.

In the meantime, Illuzzi said, "It's OK to take a breather for a year and see how things play out." In his view, "people who come [to the Statehouse] want money and have an agenda," but those outside the building aren't bothered by the lack of change.