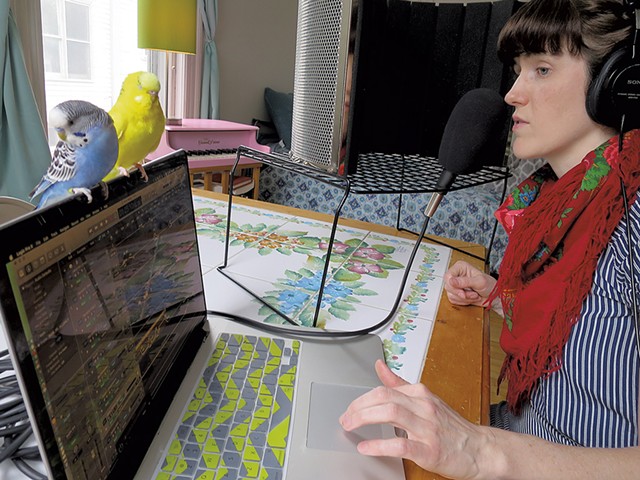 For its May 5 Masterworks concert, the Vermont Symphony Orchestra will play Ellen Taaffe Zwilich's horn concerto from 1993. It shouldn't be a momentous occasion, but it is — simply because the composer is female. The VSO has performed only 29 works by women in the last 50 years.

Such numbers are no different from those of nearly every orchestra in America. During the 2015-2016 season, the 89 largest U.S. orchestras dedicated less than 2 percent of their programs to works by women. Those data were gathered by the Baltimore Symphony Orchestra at the initiative of its female conductor, Marin Alsop.

This antique state of affairs hit Elisabeth Blair hard when she started preparing for a master's program in composition at Western Michigan University in 2015. She was reading up on composers in The Complete Classical Music Guide (2012) when she discovered that, of the 93 composers listed in its chapter on the year 1900 to the present, only six were women.

"I got really, really discouraged," said Blair, 37, who moved to Vermont in January. "I'm a feminist, and I like to think I'm empowered, but I remember thinking, Maybe women can't compose music. Then I thought, What am I thinking?! I started googling and discovered there are many women composers from every century."

Blair not only persevered with grad school; while taking classes, she took it upon herself to correct the record by creating a podcast about women composers. She called it Listening to Ladies. Blair posted a call for female interviewees on composerssite.com, stockpiled 25 phone and in-person interviews, and spent a year crafting her first episode. (It still takes her 40 hours, on average, to make one.) The podcast now has 16 half-hour episodes, each featuring an interview with, and music by, a woman.

Blair talked about her podcast and other feminist matters on a recent morning at her Burlington studio apartment. She has a calm demeanor and an articulate voice perfect for radio. From behind a closed door came the rustlings and squawks of her two parakeets.

Blair opened her laptop to play a promotional YouTube video she made for the podcast. "What do composers look like?" the video begins by asking, over music written by Ingrid Stölzel, the subject of Episode 1. A screen shot of a Google image search shows a succession of dead white men's portraits. "Sure," the text continues, "but they also look like this." The images flash by at high speed to fit in dozens of photos of women.

"It's basically a Victorian age" in music, Blair said, shutting the computer. "The canon is groomed and maintained by men."

Blair grew up in Michigan, finished high school in Idaho, then left the U.S. for England to study photography at Richmond, the American International University in London. She acquired a tattoo of the River Thames' path on her inner right arm. After graduating, Blair moved to Chicago and found a secretarial job in the University of Chicago's Department of Visual Arts.

Music began as a hobby. Blair took two years of classical voice lessons in Chicago and spent the next year and a half as a guest singer in an all-male bluegrass band. She began writing songs and trying them out at open-mic nights, then performing regularly as a singer-songwriter. Soon, however, she found that "what I was hearing in my head was so much more than I could perform."

Blair returned to her father's house in Michigan and sat down to teach herself composition — notation, theory and all. She took online lessons with an American composer based in Japan and applied to residencies, retreats and, eventually, master's programs.

When Blair saw the pathetic dearth of women composers in that classical music guide, she posted about it on Facebook. Soon after, she created a separate Facebook page, called Listening to Ladies, where she began to post one female composer a day. She thought she'd run out of composers after a few months; the Facebook posts now number 466. Blair's singer-songwriter friend, Krystee Wylder, has taken over researching and posting, and Blair tweets each post with a link to a piece by the composer. As of this writing, @ListenToLadies has 2,390 Twitter followers.

The podcast grew out of the Facebook project. Two months after she had launched the page, Blair conceived of the podcast in a conversation with harpist and fellow feminist Jennifer R. Ellis at an artists' residency in North Carolina. While older feminists objected to "ladies," citing the word's patronizing overtones, Blair intended it to imply wryness, even anger. She's now struggling with it for a different reason: She wants to feature nonbinary and gender-fluid composers.

Blair selected podcast interviewees based on two basic criteria: The women had to call themselves primarily composers and write contemporary classical music.

"I try to keep it to the hoity-toity music, because we're all familiar with women pop singers," she says. She doesn't necessarily love the composers' music; as she puts it, "That's not the point. I don't like a lot of male composers' music, either. We need the right to [broadcast] our own mediocre crap." (Blair clarifies that her interviewees are not in this category.)

Initially, Blair reached out to well-known composers including Kaija Saariaho, Jennifer Higdon and Caroline Shaw, but they "very politely said no," Blair recalls, saying some of them cited interview fatigue.

Nonetheless, a few women featured in the episodes are fairly renowned, at least in the new-music world. Classical singer Pamela Z specializes in live electronic vocal processing. Mari Kimura is a violinist whose compositions explore subharmonics, or notes below the instrument's assumed range. Lainie Fefferman cofounded the New Music Gathering in Brooklyn, a significant festival scheduled to appear in Boston this year.

Gradually, Blair turned toward promoting lesser-known composers. She also realized that almost all of the women were white and between 20 and 40 years old. More research led her to composers such as violinist Jessie Montgomery and pianist Dolores White, both African American, and nonagenarian Marga Richter.

One of Blair's strongest supporters has been Matthew Evan Taylor, an African American composer from Alabama whom she met at a Florida musicians' retreat a few years ago. Taylor, 37, is currently a two-year visiting professor at Middlebury College. He recently invited Blair to guest-lecture in his collaborative improvisation class. (His subsequent guest lecturer was Caroline Shaw, who was in residency at Middlebury last week.)

"I think it's a pretty unique project that she is doing," Taylor said of Blair's podcast. His most influential mentors have been women, he said, including Gabriela Lena Frank and Mary Ellen Childs.

While Taylor has faced plenty of hurdles as a black composer, he notes that African American women have it harder. "I don't really know what the reasons are," he said. "It's a strange obstacle. Men tend to get there first. All the black Pulitzer winners have been men."

Listening to Ladies demonstrates geographic as well as racial diversity, featuring composers from Canada, England, Scotland, Australia, Argentina and Iran. And the range of creativity is eye-opening. Avant-garde Israeli composer Dganit Elyakim "blurs the boundaries between the human and the machine," as Blair describes. Other composers lean toward lyricism, such as Beth Anderson, who writes new romantic music.

Blair left her master's degree unfinished when she realized that academia wasn't her best learning environment. Some of her own compositions, including a politically inspired work for carillon and a piece for percussion and tape (recorded track), are currently being performed by the musicians who commissioned them. But she doesn't consider herself primarily a composer. She's now writing a book of poetry and leading community multimedia improvisations while working a day job at a Burlington nonprofit.

Blair funds her podcast, minimally, through three sources: the online membership platform Patreon; the International Alliance for Women in Music, on whose board she sits; and WMUK, a public radio station in Kalamazoo, Mich., that broadcasts her episodes monthly. Through her initiative Compass New Music, she also consults on concert programming and puts out calls for scores specifically geared toward diversity. So far, she has helped put together six concerts around the U.S.

Blair's efforts contribute to what Taylor sees as an overall improvement in female composers' visibility. For the first time ever, he points out, all the finalists for the 2017 Pulitzer Prize for Music, including winner Du Yun, were women.

Partly inspired by Blair's podcast, Taylor and three other composers are curating a new-music series beginning in January 2019, called "New Century, New Voices," that will specifically feature composers of color (of any gender) and female composers. Anne Decker's Waterbury-based TURNmusic will play the series' six concerts at Middlebury, and two will be repeated in Burlington. Decker noted that her new-music ensemble performs music by women but hasn't explicitly sought it out; her collaboration with Taylor will be her first participation in intentional programming of works by women.

Ben Cadwallader, executive director of the VSO, also said the orchestra doesn't engage in deliberate "box-checking," and shouldn't. But he admitted that letting programming happen "organically" is not enough to right the gender imbalance.

The choice of Zwilich's horn concerto came about because Cadwallader had requested more 20th-century programming and more works to highlight exceptional VSO musicians. Principal horn player Shelagh Abate was one, and she suggested the notoriously difficult concerto.

In general, though, Cadwallader deplores the lack of women composers in orchestral programming. "It's embarrassing," he said. "Orchestras are struggling with this, because this field is dominated by people like me, frankly: white men. You have to do far more digging than you should have to."

Now, Listening to Ladies makes the digging a little easier.