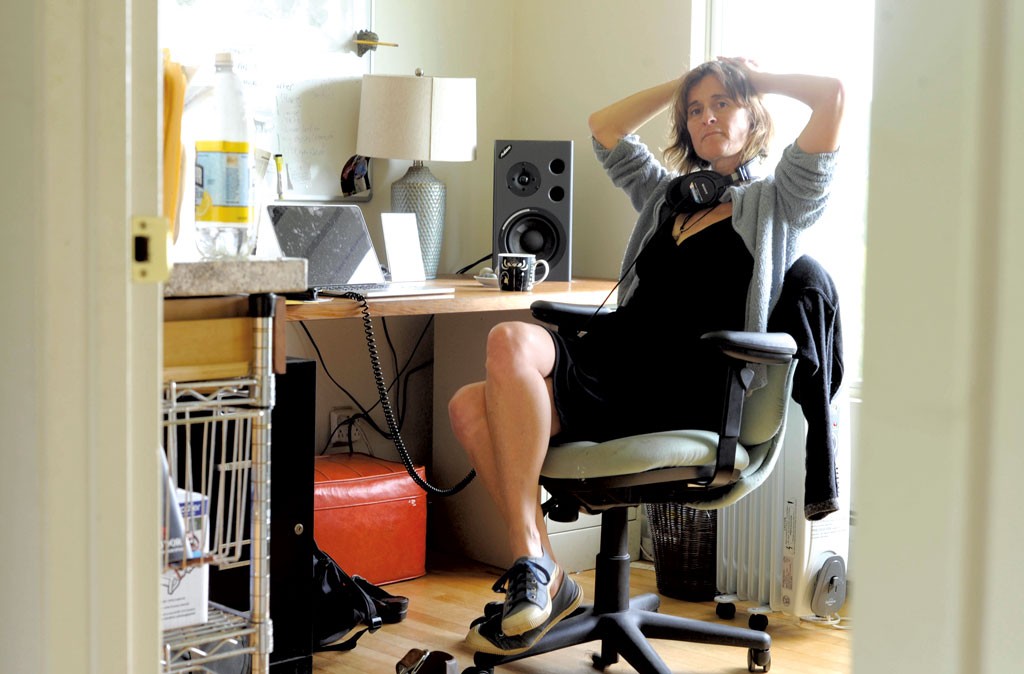 In the May 4 episode of Erica Heilman's podcast "Rumble Strip Vermont," St. Johnsbury salon owner Vaughn Hood recounted his experiences in the Vietnam War with brutal candor. "I sold anything that I owned; I wrote my fiancée a 'Dear Mary' letter, broke off with her, because I didn't want to have the responsibility of trying to come home to somebody," Hood recalled. "I said, 'Mom, I don't know if I'm going to make it home alive or not, so this is who I want to have speak at my funeral, this is where I want to be buried at, this is who I want my possessions to go to...'"

He went on: "I said, 'When I leave, I would appreciate it very much if you didn't cry.' Looking back, that's a hell of a thing to ask your mother. The reason I said that was because I thought the only reason she would cry is if she thought I wasn't coming home."

Like most episodes of "Rumble Strip," the half-hour show lacked a clear narrative arc and defied easy categorization, but it was haunting and visceral.

In the two years since she created "Rumble Strip," Heilman has traveled Vermont collecting stories that have been hiding in the shadows, or, like Hood's, in plain sight. Then she has retreated to the walk-in closet in the bedroom of her East Calais home to record introductions and polish off the audio art pieces for a small but growing group of listeners.

She has profiled taxidermists and Thunder Road drivers. She chatted with a Barre man recently released from prison and a Randolph librarian who explained a holiday called Buy Nothing Day.

Heilman recorded a friend spending five minutes reading the crime log published in the Barre-Montpelier Times Argus. "A sick raccoon was seen on Elm Street," he deadpans, as a jangly guitar plays. "A person didn't return DVDs." She recorded a middle-aged white Vermonter who recalled striking up an unlikely conversation about hip-hop with a young black man on a New York City subway.

"I'm interested in finding your expertise, and we're all an expert in ourselves," Heilman said. "It's not what's going to make you sad or cry. I'm more interested in what you know. Everybody that you talk to has some bit of information ... that I probably need to know. By doing the show, I get to ask all kinds of questions and find the answers I'm looking for. It's about the ephemera of trying to survive."

A single mother with a part-time day job, Heilman creates "Rumble Strip" stories in her spare time, usually releasing one episode a week. Her audience has steadily increased in the past two years. In the two days after she released the Hood story, she said she got 8,000 visitors to her website, rumblestripvermont.com. Public radio stations across the country have picked up a couple of her pieces.

Heilman's path to podcasting, and through life, has been an "artless trajectory," she said with characteristic self-depreciation. The 45-year-old has a classic public radio voice — soothing and slow — but in person she laughs easily and curses occasionally. She is wiry, with an angular face, striking light brown eyes and shoulder-length dark hair.

She grew up in Charlotte but left Vermont to major in musical theater at the University of Michigan. She started an experimental theater company in Chicago before landing an entry-level job at PBS' "MacNeil/Lehrer NewsHour." That gig led to a decade in New York City as a freelance associate television producer, working on programs and documentaries that aired on PBS, HBO and ABC News.

In 2003, weary of New York City life, Heilman decided to return to Vermont. Before she did, she began teaching herself audio recording and editing, in hopes it could be a new storytelling platform. She found a home off a dirt road in East Calais that she could afford and share with her 11-year-old son, Henry.

She made connections at the Vermont Folklife Center. She landed gigs interviewing war veterans, and helped kids learn to work with audio.

But that didn't pay the bills. Through a friend, Heilman got a job as private investigator for defense attorneys. Her days are spent driving around the state, talking to friends, family, witnesses — anyone who might offer a morsel of information about defendants that could help their attorneys prove innocence or negotiate for a better plea deal.

It is almost like being a storyteller, she said. She gathers the narrative threads — but doesn't weave them into tales. "I needed that part of it, too," she said.

She launched her podcast in May 2013, to absolutely no fanfare. A friend came up with the title.

Her timing was fortuitous. Podcasts — digital programs that listeners download — were beginning to take off. Last year, the 12-episode podcast "Serial," in which a reporter examines the murder of a Baltimore teenager, averaged 1.5 million listeners per episode and became a cultural phenomenon. It was even parodied on "Saturday Night Live."

It seems as though every major newspaper, website and magazine has written a story in the past year hailing podcasts — and the ads and sponsorships that fund them — as the future of broadcast journalism. Slate made a huge investment in podcasts several years ago: Its 19 podcasts are downloaded more than 6 million times a month, and the audience tripled in the past year, the organization reported.

But it's not just the medium's burgeoning popularity that intrigues Heilman; it's the freedom of the format. Weary of predictable story structures and topics, Heilman aims to tap into the "frequency of the place, or the undercurrent." Through podcasting, "people are really enjoying the opportunity to be surprised by what they hear and ... sometimes be confused by what they hear," Heilman said.

"There are so many small, irrelevant, not-newsworthy stories that I think people would fall in love with in this state. And they don't have to be framed, they don't have to have a beginning, middle and an end. In fact ... it might be interesting to feel the floor go out from you and be inside a story whose structure might not be so clear to you."

Her work is getting attention through word of mouth.

My source was Dan Sedon, one of four defense attorneys Heilman interviewed for the hourlong show "The Defense." A notoriously reticent bunch, at least publicly, lawyers who defend criminals know that many people hold them in low regard. They take client confidentiality seriously. To get anything beyond a polite "no comment" can often feel like an accomplishment.

But "The Defense" put Heilman's skills on display. In radio parlance, she gets good tape.

During her interview with Sedon, who is usually gracious but can be gruff, Heilman captured a personality only glimpsed in off-the-record settings. Sedon spoke with searing intensity about the importance of his work.

"I gave a talk to the Rotary Club not too long ago. They thought I was going to be like chum, right? Beat me up," Sedon told Heilman. "I came in and said, 'Look, I'm not apologizing for these values; these are core original values. You want to talk about the U.S.A.? Talk about the Bill of Rights. Criminal defense is the Bill of Rights ... proof beyond a reasonable doubt, right to a jury trial, burden of proof will always be on the government ... I'm not going to go out and justify what I do. You'd have to justify anything other than what I do.' I tell you, I won the Rotary Club over."

It's a matter of giving people the space to open up, then paying close attention to the editing and the sound that listeners hear, according to Heilman. She is seeking grant money to offset some of the cost of producing the show and looking for other opportunities to expand her audience. She also is starting to realize that she should use each episode to encourage people to click the "Donate" button on her website — few people have done so.

But she plans to keep doing the work, even if she never gets paid. Telling the stories, she said, helps her to understand a state with which she acknowledges a "love-hate relationship."

"It can be constricting," Heilman said of Vermont. "I love it, but it's not one thing. It's not just beautiful. And that's where these stories are trying to be, eating around the edges of that."

Hood's Vietnam story wasn't beautiful, though he and Heilman related it beautifully. In an interview with Seven Days, Hood said that he had wanted to tell it for years. But no one asked him until Heilman dropped by his salon, where her sister is a regular client. After overhearing Hood spin a yarn one day, she tipped off her sister.

Though he had never heard of Heilman, or "Rumble Strip," Hood talked to her for six hours during two weekends in his salon.

"I was completely comfortable with her," Hood said. "I had trust for her. I knew she would do a good thing. I guess that trust just comes across. It seems a little unusual to edit it down to 30 minutes, but it worked. She got it right. She got it all."