Making hay while the vinegar flows 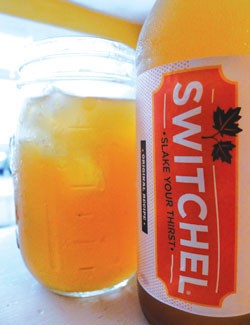 What would you do if someone handed you a glass of water seasoned with vinegar? Would you crinkle your nose?

Not Susan Alexander. From the moment she was first handed a glass of switchel a quarter-century ago, at a family gathering, she was in love. The tangy blend of honey, apple-cider vinegar, ginger and water left such an impression that she made many batches of it over the years since. “I liked everything about it,” Alexander recalls, including that the beverage had historical resonance in her family: Both her husband and her sister-in-law could remember their grandparents making batches of switchel to keep themselves energized and refreshed during haying time — hence the drink’s other name, haymaker’s punch.

In the back of her mind, Alexander thought it was something she might someday bottle and sell. Yet two careers and two children took precedence — until this month. After years of honing her formula, Alexander has launched her own amber-colored brew, Vermont Switchel.

Switchel’s roots stretch back to a time in colonial New England when drinking cold water was considered almost suspect (it could harbor bacteria, or was thought to be a shock to the system). Rum, cider and beer were plentiful, but not exactly ideal for manual labor. Switchel offered late-summer hayers a buzz-free, zingy pick-me-up, with apple-cider vinegar subbing for often-scarce citrus juice. “A hundred years ago, people didn’t have access to a lot of fresh ingredients, so they used what they had in their kitchens,” says Alexander. “Those haying days were long and hot, and you needed a lot of energy.”

They also needed nutrients and electrolytes. Though our forebears were probably unaware of the specifics, the ingredients in switchel — ginger, vinegar and sweetener, whether honey, maple syrup or molasses — are all high in potassium. Those invigorating electrolytes might also account for switchel’s popularity, in various forms, across time and culture; it’s similar to the ancient Greek medicinal oxymel, also a blend of vinegar, honey and water.

About four years ago, Alexander got serious about switchel and began experimenting with a commercial version. Working with a base of spring water and cider vinegar, at first she adhered to the traditional recipe, but found her early efforts “subpar.” So she began tweaking them. She eschewed honey in favor of her own maple syrup, as well as some from Butternut Mountain Farm in Morrisville. Alexander played with various spices, eventually adding a touch of molasses. She tried carbonation but didn’t like it, and also avoided oatmeal, which some people add for extra bulk and nutrition. Along the way, Alexander introduced a flavor that was inaccessible in colonial times: lemons.

I tried an earlier incarnation of Vermont Switchel at the cheese-makers festival last year and found it to be immensely quenching on a hot day: sweet swirls of maple, the slightest traces of vinegar sizzling on the palate and a long finish. It tasted fresh and alive.

Yet Alexander didn’t think it was quite ready, and spent the next few months fine-tuning her formula. She finally launched Vermont Switchel during a tasting at Dealer.com earlier this month and has begun selling it at farmers markets. She hopes to be in a few brick-and-mortar shops soon.

“A lot of people just smell it, and the idea of drinking vinegar is off-putting,” concedes Alexander. But if they push beyond their preconceptions, they’ll find beguiling, unusual flavors, and some may even become hooked.

Find Vermont Switchel at the Richmond Farmers Market on Fridays, 3:30 to 7 p.m. facebook.com/thevermontswitchelcompany