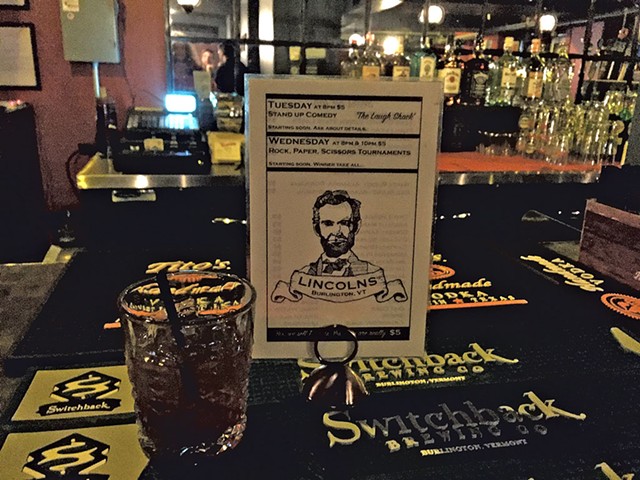 The owners of the speakeasy that opened last month in downtown Burlington will divulge its name — Lincolns — but not its location. The new bar with covered windows is somewhere off Church Street, and having to find it is part of the appeal, co-owner Chris Beaulieu said.

"Once someone finds it, they tell people; they tell their friends," said Beaulieu. He expects to continually see new customers discovering Lincolns for the first time.

When the hunt is over, a bar-goer will discover a space that resembles a tavern from centuries past: high, dark wood tables; a lithograph of the nation's first president and numerous images of its 16th; and a barkeep who accepts cash only. Prices evoke bygone days, too: Every drink is $5, and so is a bowl of chili mac and cheese.

The draft list consists of five beers — three from Vermont — and one hard cider. One of the lines is reserved for Allagash Brewing White, brewed in Portland, Maine. That's a nod to the hometown of the first Lincolns, which opened about three years ago, according to Beaulieu. He moved from Maine to open the Burlington Lincolns.

A selection of 10 spirits, including vodka, gin, rum, tequila and whiskey, go into the mixed drinks or can be ordered straight up. The cover charge is also $5 on Tuesday standup comedy nights, and that money goes to the performers.

Still in the works: "rock, paper, scissors" tournaments on Wednesdays. "We want to create an environment for the locals," Beaulieu said.

The original print version of this article was headlined "Lincolns, Where Art Thou?"